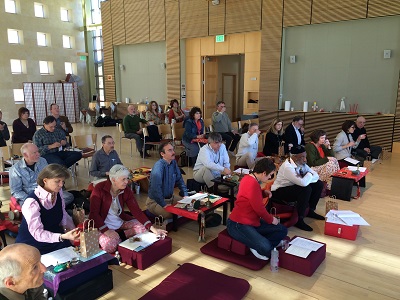 Between 20,000 and 75,000 years ago, the Laurentide Ice Sheet covered what is now eastern Massachusetts in thousands of feet of ice and carved hills that remain today. In 1807, the Andover Newton Theological School was founded on the top of one of these hills in Newton, Massachusetts. One thousand years ago, Marpa Lotsawa brought the practice of Vajrayogini from India to Tibet. Just before the voyages of Columbus to the West Indies, the Sixth Karmapa, Thongwa Tönden composed the Vajrayogini sadhana that Chögyam Trungpa introduced to students in North America in 1977.

Last month, April 15 to 17, 2016, thirty-eight students of Chögyam Trungpa Rinpoche met and practiced the Vajrayogini Sadhana, the Werma Sadhana and the Sadhana of Mahamudra at the Wilson Chapel of the Andover Newton Theological School. The school, after more than 200 years, has become financially unsustainable due to declining enrollments and is selling its Newton campus. The beautiful Wilson Chapel, built in 2007, where we practiced Werma Sadhana looking out forty foot tall, floor to ceiling windows at a cool, brilliant, cloudless, blue sky, may be torn down.

Two seminal teachers in the introduction of Buddhist lineages to North America, His Holiness the Sixteenth Karmapa and Shunryu Suzuki Roshi, were separately asked if they could summarize the essence of the Buddha’s teaching in a couple of words. They each replied, “everything changes.” We live in a time when we don’t know if Chögyam Trungpa Rinpoche’s Kagyu and Nyingma teachings will survive in North America. But, for three days, gray haired students who knew Chögyam Trungpa and new students who have met him through his books, practiced together. Marv Ross traveled from Boulder for the retreat. Matt DiRodio and Teri Epp came from Philadelphia, Steve Gamble and Karen Porterfield from Washington, DC and John Gorman from New York. For three days we chanted the Heart Sutra, Seven Line Prayer and Kagyu Lineage Supplication each morning and protector chants and longevity chants each evening. Frank and Susan Ryan brought everyone to their home for a magnificent sit down dinner party Saturday night. Arthur Dion and J.P. Glutting served as our good humored gatekeepers. Ilona Anderson and Erika Wilton were our non-rota, organizing principals. Chris Magnus made elegant shrines for Vajrayogini, Werma and Sadhana of Mahamudra practices. Matt DiRodio performed a kick ass blues harmonica solo at a Sadhana of Mahamudra feast.

The vision for the weekend was a simple retreat to reconnect with our teacher and the powerful energies of the practice lineages he transmitted and entrusted to us. The energies of these practices are timeless, unchanging. And many attending the retreat are ensuring that these lineages are passed to a new generation of students. Several are or have been teachers at Judy Lief’s Profound Treasury retreats. Marv Ross is working with Clark Warren in Boulder teaching classes and inviting Kagyu and Nyingma teachers. Emily Weidman, Michael Levin, Erika Wilton and Michael Fagan for the past three years have been leading large classes methodically through Chögyam Trungpa’s books at the First Unitarian Church in Waltham, Massachusetts. Chris Magnus regularly hosts online practice sessions promoted through the Chronicles’ Ocean website. Matt DiRodio and Michael Carroll are teaching in Philadelphia. Michael Fagan, Jim Wilton and Chris Pleim are teaching in Cambridge at the Tibetan Buddhist Resource Center through their new non-profit corporation, Boston Buddhadharma, Inc., the sponsor of this weekend’s retreat.

Everything changes. But we work so that the aspiration of the Vidyadhara Chögyam Trungpa Rinpoche, a buddhadharma without credentials, may be realized and that new students may find their way to genuine practice in the Kagyu, Nyingma, and Shambhala lineages. Ki Ki So So!