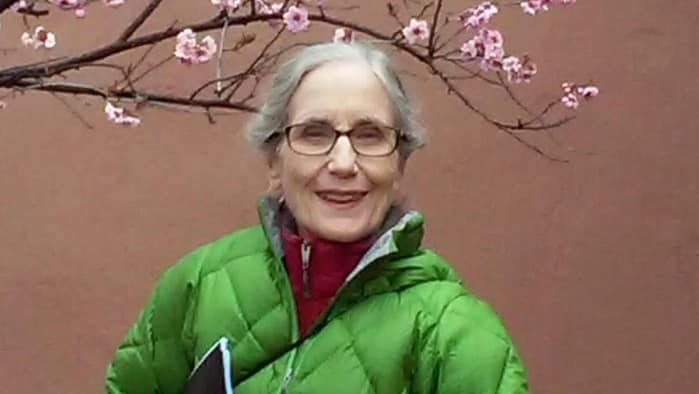 Basia was a very close and precious friend to so many, had a huge heart, and was an ideal and accomplished dharma practitioner.

She had deep devotion and a great dedication to her teachers and her practice. She died very peacefully. Our hearts go out to her husband Ludwik, her daughter Natasha, and to all her friends and relatives.

Basia was educated at the prestigious Winsor School for Girls, then attended Smith College, followed by graduate work at the Columbia School of Social Work.  Honoring a strong inspiration to learn more about her own spirit before diving into social work with others, Basia dropped out of Columbia and caught a bus from New York to Mexico.  She met another free-spirited drop-out, Ludwik.  They fell in love and married.  They then settled in Boulder, Colo. where they had two children, Natacia and Ciel.  Ludwik finished two degrees then procured a position in the Art Dept. of the University of Colorado in Denver.

Ludwik learned from a University of Colorado colleague, John Visvader, that a Tibetan Lama name Chögyam Trungpa Rinpoche had been invited to Colorado. John Visvader, a philosophy professor, was the prime mover in extending the invitation, and gathered a small group of people to support Trungpa Rinpoche’s arrival in Colorado, including Ludwik and Basia.  A small, pioneer-era stone cabin high in the Rockies was procured as an initial residence for Trungpa Rinpoche. Basia rolled her sleeves up and made the cabin into a hospitable living space.  The day Rinpoche arrived, Ludwik and Basia had an interview with him and immediately made a connection, becoming close students of him thereafter.

Basia attended the first Kalapa Assembly, which featured the introduction of and education in the Shambhala teachings of Trungpa Rinpoche.  She was also one of the first two women to become an attendant and aide-de- camp , or Kusung, to Rinpoche.

Ludwik and Basia moved to Halifax, Nova Scotia at Rinpoche’s request,  Rinpoche and his students were establishing a new international headquarters there.  In Halifax, Ludwik and Basia, along with their daughters, opened a natural foods grocery store, the first of its kind there, named Great Ocean Natural Foods.  The store grew quickly and was very successful.  Later, they sold the store and moved back to Colorado in 2005, settling in the small town of Niwot, where they have lived ever since.

Several years after the death of Trungpa Rinpoche, Ludwik and Basia made a strong connection with the Tibetan Buddhist teacher Tulku Sang-ngag Rinpoche, continuing their Buddhist practice and study.  They both became avid students of Tulku Sang-Ngag, engaging deeply in the teachings of the Nyingma tradition of Tibetan Buddhism, and doing extensive retreat practice over several years. They have continued as students of and teachers for Tulku Sang-ngag to the present day.

Basia had many superlative qualities, stemming both from her natural disposition and her many years of Buddhist practice.  Among the most noticeable and admirable were an incredible gentleness and kindness, unwavering devotion, an unrelenting dedication to meditation practice, a broad wisdom steeped in a thorough study of Buddhism, and an unreserved but always considerate honesty and sincerity in her communications with friends, colleagues, and strangers. She will be sorely missed by many people, yet she leaves her luminous example as a legacy that will influence many now and in the future. Basia sought and found her own spirit, polished and perfected it, and extended it as a wonderful gift to all she encountered.

Thank you to Ri-me Society for this piece about Basia’s life.

I met Basia in 1972, renting a room in Marcia Usow's home a block up from the Turzanskis. I was almost broke and through Marcia got a job cleaning the Turzanski home...which lasted one day, as everyone laughed when i said, "I just tried not to dirty the already clean, spotless house!" When I was PG in '73 I became Natasha and Ciel's after-school nanny. Really, Natasha didn't need a babysitter, she just watched "Bewitched" etc. on TV, but Ciel and I would play on the kitchen floor, and I'm afraid we did things like going through quite a few coffee filters making designs on them w/ food colouring.
Basia and Marcia were my first MIs and I learned so much from their different but complimentary approaches to dharmic life. When I became a teacher at Vidya, and had both Natasha and Ciel in a delightfully rambunctious 7th-9th grade class of very bright second-generation buddhist teenagers, it began to feel like I was part of a crazy family.
Fast forward to the 1985 Seminary in what was still the Rocky Mt Dharma Centre, Basia was head of practice and I a 3 yana transcript teacher. How wonderful to share that buddha realm together!--the Vidyadhara's last full seminary. And Ciel was one of my meditation students.
Moving to Nova Scotia in 1992, I soon discovered how many American buddhist had already arrived and were actively contributing to the city of Halifax and environs. The Turzanski's Great Ocean was one of those bright new places. And in true Turzanski style, they offered their staff free Shambhala Training Level I weekends!
Then there were the many glorious summer Khenpo programs at KCL where we found ourselves together in a big, open Shambhala buddhist world, the Turzanskis usually finding ways to serve Khenpo R. with grace, humour, and patience. A few years later, by coincidence Basia, Ludwik, and I found ourselves in training at Gampo Abbey for 3 year retreat, I going into a room in Group C, and Basia taking that room in Group D--and while the Turzanski's were "in", I rented their lovely home on Parkhill Rd. and Natasha and Ciel came to stay w/ me there for a brief visit.
The strong friendship and family feel continued between us even after Basia and Ludwik returned to Colorado to live in Niwot. Every year when I'd come to visit my son Waylon, I'd visit the Turzanskis, and it really did feel a bit like a homecoming.
Dear sangha friends with whom we share so many dharmic experiences too many to tell are precious. Their life is precious, and their dying a profound teaching.

It's been years since I last saw Basia but the warm feeling I always had when I saw her remains with me to this day. Lots of love to Ludwig and Natasha.
Gerry

Basia, you have always been such a radiant presence and a mentor to so many of us aspiring to bring the teachings of loving kindness into our daily lives and our interactions with each - as you always seemed to do. And always with that warm smile, eyes alight, and gentle laugh.

How sad we will not see your smiling face again in this life.

And our gratitude always to you, Basia for how much you gave to so many of us for so long.

Know you will be triumphant on this next journey with your clear mind and kind heart.

But we miss you already.

Our love to Ludwig and Natasha from all of us here in Nova Scotia.

Hello and good bye, dear Basia. When I was new to the community in the early 90's, your presence at your first Great Ocean in St Margaret's Bay, was soothing and reassuring and continued to be that kind of presence whenever I met up with you. That kind of patience, clarity, kindness and compassion radiated out and touched me through the years and all our changes. Being in your presence always felt like a big breath with a gap to remind me to relax and take that breath. Thank you!

In addition to being such a gentle, generous and caring friend, Basia also embodied those qualities in everything she did. Her one-pointedness when setting up or cleaning a shrine was in effect a teaching on mindfulness and devotion. And she was incredibly gentle and brave in her personal life.

As a new member of the community in Halifax in 80's Basia was an incredibly helpful (and elegant) guide and inspiration. At deleg meetings, feasts or in passing there was always a conversation that seemed to never end as it was picked up with the next chance meeting. Over the years the conversation evolved into a deep dharmic one that constantly inspired. Vajra sister, teacher, friend.

Whenever I would see Basia after a span of months and often years, she would always greet me as if we had talked yesterday. Her infectious warmth and kindness would dissolved any awkwardness on my part. And it was humbling to see that she treated everyone in that same wonderful caring spirit. Just thinking of her now, opens my heart with sadness and joy. I miss her already.

Just a brief note to share that, unless I'm mistaken, having participated in the 1980 seminary, I remember Basia having been an abiding presence there, active in leading the practice (or) study programing there. Of course, I am sorry for this loss, and am glad to have the opportunity to practice with her, and for her, at this time of her passing...