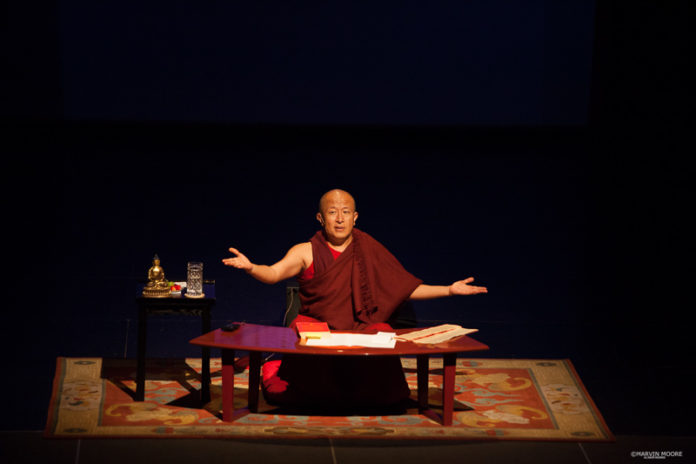 During his talks on the foreword to The Rain of Wisdom, Dzongsar Jamyang Khyentse Rinpoche marveled at Chögyam Trungpa Rinpoche’s guru devotion, vision, and tremendous contribution towards transplanting the buddhadharma in the West. Noting that “the younger generation doesn’t mention the guru much,” he referred to the Colophon. The opening lines read:

You are the amrita which dispels the mind’s suffering.

You alone are the guide who leads one on the path of liberation.

What joy that your profound brilliant wisdom has entered my heart!

Four hundred and seventy people attended Dzongsar Khyentse Rinpoche’s Friday night talk at Citadel High School’s Spatz Auditorium. The weekend program, which was sponsored by Siddhartha’s Intent, was attended by members of the Shambhala sangha, students of Khyentse Rinpoche, and Haligonians coming to their first dharma talk. In addition, nearly 1,000 people tuned in to the weekend program remotely via live webcast with support from the Shambhala Sun Foundation and Siddhartha’s Intent.

After noting that his mother was Kagyu and he grew up with the Kagyu Gurtso, Rinpoche shared lessons learned from Tilopa, Naropa, and Milarepa. For his day job, Tilopa, the father of the Kagyu lineage, coaxed the oil out of sesame seeds by pounding them. The only way you can do this, explained Rinpoche, is if you know the oil is in there, since you can’t tell by looking at the seeds. In the same way, “We don’t look like Buddha,” he added, likening this to a man who is frantically looking for water while holding a piece of ice. “If you relax,” he noted, “you have confidence that it becomes water.”

He discussed doubt, and in the same breath, the presence—even necessity—of obstacles on the spiritual path. Rinpoche cautioned that because there is a strong temptation to remain in calm abiding (shamatha), what is needed to stir and shake it up is “the sharp, piercing blatant power of vipashyana.”

Returning to the Colophon, he read aloud the following stanza, remarking on its profundity:

In the space of the ground mahamudra of luminous emptiness,

Traveling on the path mahamudra of luminous insight,

In the fruition mahamudra of luminous bliss—

May all beings of the three realms be liberated.

As for the ground mahamudra of luminous emptiness, Rinpoche noted that it can’t be beautified or made better. On the other end of the scale, if only the luminous aspect is seen, that’s eternalism—overly believing in what is believable—which he said jokingly would result in being reborn in California. However, if only the emptiness aspect is seen—nihilism—the result would be rebirth in France.

In talking about ordinary mind, Rinpoche said the reason we have anxiety is we try to make it special. This led into a commentary on Naropa. At Nalanda, Naropa shared the dominant worldview of no pain, no gain, which he later transformed through Tantric practice into all gain, no pain.

Following his talk on Friday, Rinpoche conducted a youth audience attended by about 55 people. After the final talk on Saturday, Rinpoche performed Refuge and Bodhisattva Vow ceremonies; and later that evening at the Shambhala Centre, he delivered a feast-together-in-the-dharma talk to sadhakas.

In devotion firm as an unchanging mountain
Truly seeing you alone, [my teacher,] as the Buddha,
Free from conventions of young or old,
In foreign lands, in sadness, with reverence,
I survive by the amrita, [the nectar,] of your blessings.

You, my only father guru, have gone far away.
My vajra brothers and sisters have wandered to the ends of the earth.
Only I, Chögyam, the little child, am left.
Still, for the teachings of the profound and brilliant Practice Lineage,
I am willing to surrender my life in sadness.