THE SIX REALMS AND THE SIX BARDOS

The complete seminar entitled The Six States of Bardo Experience, given in Allenspark, CO July 15-24, 1971.

Transcending Madness (abbreviated hereafter as TM) is based on two seminars given by the Vidyadhara Chögyam Trungpa Rinpoche (VCTR) in 1971, just a year after he arrived in the United States. During this period, he presented a great deal of Vajrayana material to public audiences, in an experiential context, which later his students realized was very advanced teaching. 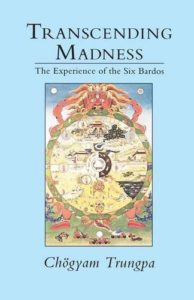 The two seminars that make up the book are concerned with how the bardo states manifest in the everyday experience of practitioners and ordinary people in the world. In the first half of the book, VCTR looks at how bardo states and the six realms correspond, one on one. In the second half, he looks at how an individual cycles through all of the bardos while in a single realm. He is regarding the realms as psychological states experienced within the human realm.

In addition to the Varjayana understanding of this material, Trungpa Rinpoche was also presenting the material as an adjunct to working with students on developing a Buddhist approach to psychology and psychotherapy. The extremely direct experiential quality of the presentation at times seems to embody the realms and bardos it is describing. The editor of this volume, Judith Lief, writes in her foreword: “The Vidyadhara presented teachings on the realms and bardos as a way of understanding madness and sanity and learning to work directly and skillfully with extreme states of mind.”

The relationship of the bardos to death and dying is not particularly examined here but is discussed in other seminars he taught on The Tibetan Book of the Dead. (Much of that material appears in Trungpa Rinpoche’s commentary on the translation of the text.) When VCTR does touch in TM on the questions of reincarnation, karma and rebirth, he speaks of the problems with a simpleminded view, in which people feel they can make endless mistakes because they are coming back and can do better in the future. He says: “The present situation is important – that’s the whole point, the important point.”

The Six States of Bardo

The first half of Transcending Madness presents a seminar entitled “The Six States of Bardo.” Most of the seminar is concerned with the relationship of a particular realm to one of the six bardo states and the understanding of that experience.

In this seminar, CTR first defines bardo:
Bar means “in between” or it could be called “no-man’s land.”
Do is like a tower or an island in that no-man’s land.

The chart (from the appendix) showing the main topics discussed and how the bardos are related to the realms: 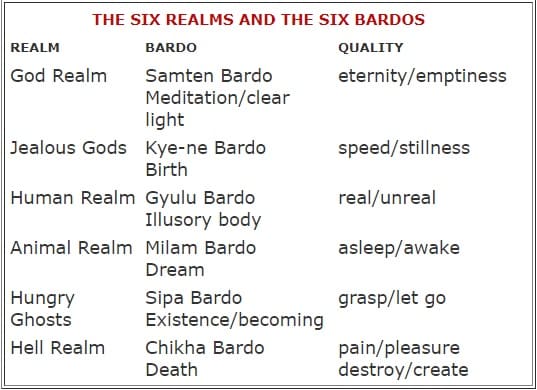 The Six States of Being

Transcripts from this seminar make up the second half of the book. Here VCTR says that bardo is:

that which is outstanding like an island in terms of your life situation, that which is between experiences…Bardo is that irritating and heavyhanded quality of pleasure just about to bring pain, invite pain. It is that kind of uncertainty between two situations.

CTR describes his overall approach to the seminar in this manner:

The concept of bardo has six types. It seems to be quite worthwhile to relate these six bardos with the six realms of existence…Each of these realms has some quality of extreme pleasure and extreme pain…but those extremes have entirely different textures in the various realms. For instance, there is the extreme hunger, rigidness and stupidity of the animal realm; the extreme indulgence of the human realm; the extreme relativity of the jealous gods realm. All kinds of realms take place, each with their bardo states.

What we are going to discuss is largely the psychological state where there is pain as well as pleasure – physical pain, psychological pain, or spiritual pain; spiritual pleasure, psychological pleasure, or physical pleasure. All six realms are characterized by this continual process of striving…The bardo experience tells you the details of the texture or the color or the temperature of godlike mentality or hell-like mentality; whatever it may be. It tells you in great detail about these basic situations or realms, about things as they are in terms of panoramic vision. (pages 184-185)

The following list (Appendix B) is how one cycles through the bardos within any realm.

Note that the inclusion of chonyi bardo (which VCTR says points to the fundamental shifty quality of experiences) increases the number to seven bardo states.

THE CYCLE OF THE BARDOS

VCTR describes this cycles of bardos as follows:

Chapter Nine, “The Lonely Journey,” (pp 163-180) is a poignant summary of how this material applies to the practitioner’s journey:

Hello
I have been listening to VCTR teachings on Bardo, and am so deeply impressed by these teachings and wondering if there is a way I can download mp3 to be able to listen on my ipod whenever able? I would make additional donations in support of the archives or purchase if possible
Thank you
Andrea Pucci

Thank you so much for making this form of these teachings available. I’ve been listening to these tapes as well are reading the book Transcending Madness. The two together of tapes and book are very helpful. As a student of the Vidyadhara from the seventies I just cannot get enough of my master’s voice.

I also attended the program this weekend with Dzongsar Khyentse Rinpoche. He certainly helped deepen my understanding of this. Inspired as he said by the approach and profundity of Chogyam Trungpa Rinpoche’s teachings, Dzongsar Rinpoche was also adroit at presenting a multi-layered and multi-faceted teachings that benefited both young and old, both new and seasoned practitioners. Here is how to understand as well as how to practice. Here is how to apply this to our daily lives as well as to the greater transitions of life and death and beyond. Far out! But “don’t freak out,” as Trungpa Rinpoche taught in the 1970’s as how to experience awakened wisdom.

When this program of Dzongsar Rinpoche is available at his web site, could you please post a precise link? And please turn up the volume on the voice of Trungpa Rinpoche. The introduction has good volume, but when the master starts to speak the volume is so low that it is difficult to hear. Even when I do all I can at this end to turn it up.

I hitch-hiked up to Rinpoche’s house in Four Mile Canyon in early July1971 to catch a ride up to the first summer seminar in Allen’s Parkalong the Continental Divide. I got a ride in the back of a truckdelivering supplies with, among others, a tall colorful talkativefellow named Alan Marlowe who said he had just returned from Thailandwhere he had been practicing in a monastery as a Buddhist monk.

I have many vivid memories of those 10 days which were extremelyformative in my 21-year-old life and emerging Buddhist path.Rinpoche’s teachings were utterly unfathomable and equallycaptivating. Marv Ross was taping the talks, and immediately aftereach teaching I would listen to them with his headphones to try andcomprehend what Rinpoche had just taught us. We also had discussiongroups in the afternoons. But I was still utterly bewildered by thematerial (even though I had studied Kant and Hegel as a philosophymajor at UCLA two years earlier).

Karma Dzong — with Jonathan Eric’s inheritance — was about topurchase the land near Red Feather Lakes which Rinpoche soonchristened Rocky Mountain Dharma Center (and Sakyong Mipham renamedShambhala Mountain Center many years later). The Pygmies were planningto move up there later in the summer, and I planned to move there,too. There was some discussion about me camping with them in themountains above Boulder until it was time to move up to “the land.”But one of the Pygmy guys said it wouldn’t work out because I was notdeferential enough to men.

The camp at Allen’s Park had some horse stables, and one afternoon Idecided to go riding. The horse bolted away up the mountain carryingme along with him. As we raced past Rinpoche’s cabin Lady Diana camerunning out and yelled at me “Kick him! Control your horse!” I managedto stay upright, but it was a wild ride. A foreshadowing of things to come… 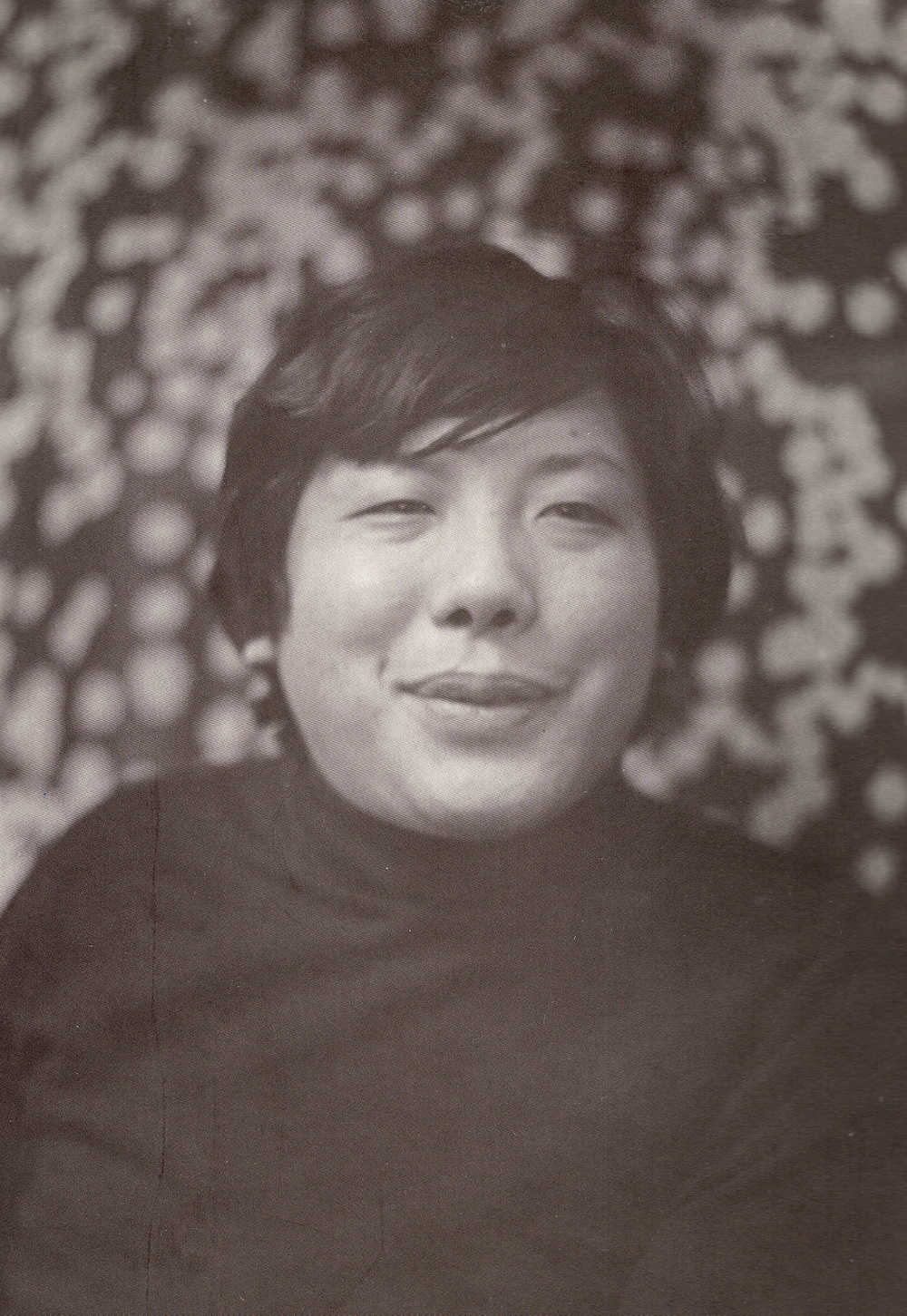