Here comes Chögyam dressed as a hailstorm.
No one can confront him.
It is too proud to say Chögyam is invincible,
But it is true to say he cannot be defeated.
Chögyam is a tiger with whiskers and a confident smile.
This is not a poem of pride
Nor of self-glorification:
But he is what he is.
He escaped from the jaw of the lion. 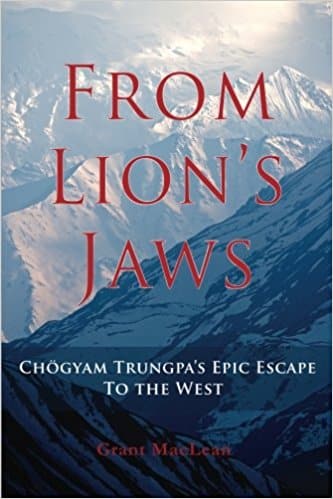 Chögyam Trungpa’s story of his escape across the mountains of Tibet and India in 1958-59 has already been chronicled in Born in Tibet, his autobiography co-produced with Esme Cramer Roberts, first published in 1966. In 2016, Grant MacLean reimagines this story using added detail and crucial information he has gathered from close friends, tulkus and teachers who accompanied him on this very harrowing and most amazing journey of escape from the Chinese communist takeover of Tibet.

This book, contrary to usual form was written after the film. Touch and Go, an innovative pairing of Google Earth and Flight simulation technology, is narrated by the author describing the route in words and pictures that this group of refugees took from the mountains of Kham to freedom in India.

This book begins at the beginning when Rinpoche was first discovered as the 11th Trungpa, was brought to Surmang for instructions and passed along to various teachers as his own practice took on more depth and understanding.

In the mid-to-late 1950s, the Chinese were moving in troops to claim territory in Tibet. Tibetans became resistance fighters and many were killed. Communication was slow and perhaps not as trustworthy, so there was much hesitation and disbelief at the beginning that this kind of encourachment was even happening. The young Trungpa received many contradictory instructions. Slowly it became clear that he would have to leave his homeland and follow teachers—the Karmapa, Jamgon Kontrul, and the Dalai Lama—who had fled to safety before him. When he left, Chögyam Trungpa had assembled a small group of 13 or 14 people to go with him under cover of darkness. As the journey progressed, up to 300 refugees traveled with the group, including men, women and children of all ages.

As much as this is a true life adventure story, which MacLean compares to Sir Ernest Shackleton’s Journey of Survival through Antarctica, the personal suffering of the refugees was profound. So many people were sick and died along the way. The group had to endure freezing temperatures, deep snow,  heat and jungle humidity, narrow paths, no paths at all, near starvation conditions (for the later part of the journey, they ate boiled yak leather from their bags), and the constant fear that Communist troops could be anywhere, hiding in wait along their trail.

It’s staggering to reflect on what these ordinary people were taking on. They’d already had a thorough taste of hard travel and harrowing obstacles, and had a solid sense of what lay ahead. And the rigors of the coming journey paled beside the prospect of the unknown. No-one, apparently not even Rinpoche and the lamas, personally knew anyone who’d actually been to India. Jampal, Akong Tulku’s younger brother, joked later about how little they knew of the wide world, how extraordinarily ignorant of it they were. They had no maps, no navigational instruments, not even a simple compass. For all they knew, once they went beyond their land’s fortress walls, the Himalayas, they’d fall off the earth’s edge and into the void. p.160

What Chögyam Trungpa was responsible for was not only the lives and well-being of his followers and fellow travelers, but, as a Kagyu lineage holder, he was carrying with him—literally and in his mind—precious dharma teachings. Along the way, in a primitive campsite, he managed to write a book on meditation that was eventually lost along the way. Many dharma materials had to be jettisoned into the river to keep them out of Chinese hands. The miracle is that both the teacher and the teachings survived against such insurmountable odds.

Rinpoche’s leadership style changed along the way as he began to take control of the group’s ultimate survival. Whereas he had been used to consulting with lamas and those close to him, he had become more confident in making decisions for the group and sticking by those decisions. Apparently, the 19 year old Chögyam was reputed to be especially adept at mirror divination. At several junctures along the way, MacLean explains the mechanics of this kind of divination and folds its importantce into the fabric of the story:

…In this technique a female deity is invoked, whose image appears reflected in the mirror to offer guidance. The mirror is not usually read by the diviner himself, but by a virgin boy or girl no more than fifteen years old— Rinpoche described the reading process as allowing the mind to relax into a child-like state of openness and purity, a state not unlike meditation. It’s very rare for someone to have the power to both invoke the mirror deity and to read the divination: Rinpoche could do both, and had become famous in East Tibet and beyond for the clarity and reliability of his readings.  p. 63

There can be little doubt that, back in the Psophu Valley, when Rinpoche proclaimed their journey to India a pilgrimage, he had a similar transformative vision in mind. Then he’d instructed the refugees that the real journey would be an inward one, that they should strive to see each step along the way as holy and precious; in this way, the journey would be personally transforming and beneficial. From their Buddhist understanding, many would have grasped what he said: that like a lotus arising from mud, the most sacred of visions could arise from the most miserable circumstances. The the world is seen in its fullness, as a realm of enlightened energies. At least some of those who perished on the way might have done so with that vision bright in mind—might have felt that on such a journey, led by such a teacher, it was a fine, indeed blessed way to go.  p. 258.

It is no accident, or perhaps it is just a series of accidents, that propelled MacLean to write this book. Firstly he is a seasoned student of CTR and a ranking member of the Dorje Kasung, the cadre of guards created by Rinpoche to protect teachers, dharma and their sacred space. He also has training in psychology, a passion for military history, and is a consummately joyful storyteller.

Chögyam Trungpa Rinpoche
The first volume of Chögyam Trungpa's teaching in America is still fresh, outrageous, and up to date. It describes landmarks on the Buddhist path...