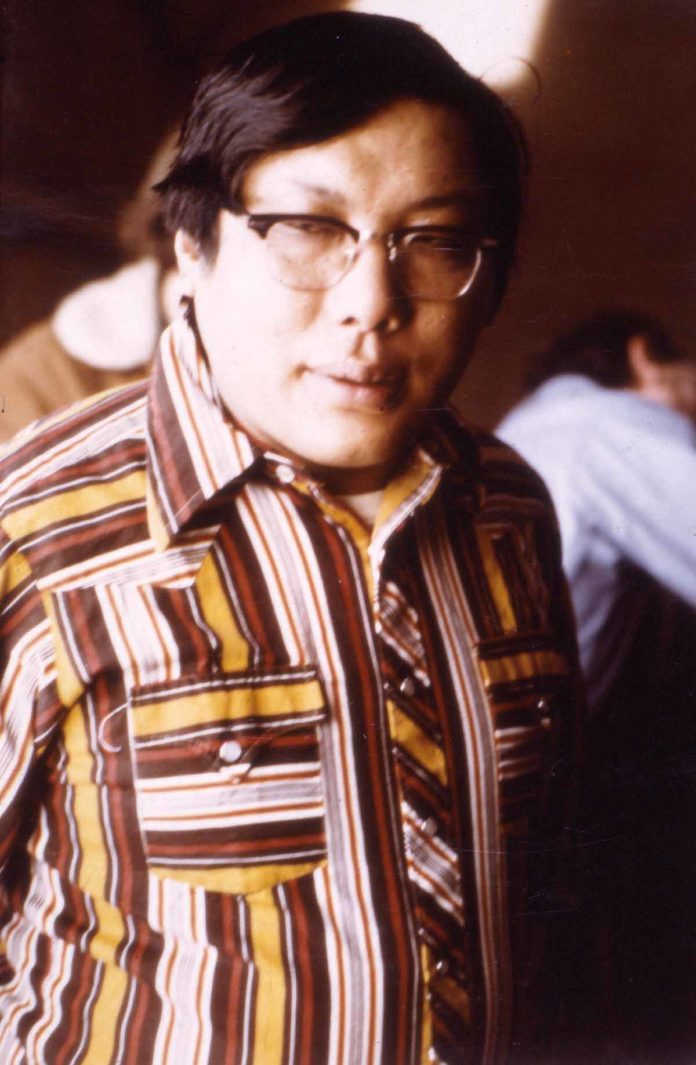 In December of 1972 I was traveling east of the Cascades and the Rockies on an adventure. Just looking out the bus window at the endless snow and sporadic magpies that I’d never seen before I felt attentive and expectant of the unknown. These big iridescent birds with their shiny black and white feathers seemed both magical and comical omens.

By the time I got to Jackson Hole I was exhausted. I had hitch-hiked, bused and snow-shoed to the Snow Lion Hotel, arriving early, but bedraggled. I had found out about the “Crazy Wisdom Seminar” back in Bainbridge Island from a professor friend who had recently moved to Colorado from the West Coast. He thought I would really like the young sangha community in Boulder. He had sent me a “Garuda” magazine full of the teachings of Trungpa Rinpoche just when I had coincidentally picked up Born in Tibet, his autobiography, at the ferry terminal in Seattle. The more I read of this teacher, the more I wanted to find out. So when I heard this seminar was happening I decided to go. Afterall, the only thing between Washington and Wyoming was the rather skinny state of Idaho. It was a great deal closer than Colorado. So with that crazy logic, I had arrived.

Soon I began meeting the arriving participants. Some had come all the way from California and from the East Coast. It felt like the gathering of a small long-haired clan. There was dancing and drinking in the hotel bar that first night.

Amazingly around 10:30 we were to go to the large room where the seminar talks were to be given but Rinpoche had suggested we watch a certain film instead–“Woman in the Dunes”. So while the ski lift rose and fell with empty chairs up and down the Grand Tetons in the night air outside the windows of the Snow Lion, we gathered to quiet down and watch this sensual film. It was evident this Rinpoche was not an old purist.

Finally, the following night, Rinpoche, wearing a cowboy shirt, suspenders, and clean jeans, arrived for the first talk. His relaxed, chubby body and big smile disarmed everyone. Periodically he would take a sip of Scotch or stroke his fingers through his shiny, black hair. But his teaching on Padmasambhava and all his “Crazy Wisdom” doings made no sense to me. Students would ask seemingly knowledgeable questions about how this crazy wisdom realization related to a particular bhumi and I only felt more lost.

Meekly, after the public question and answer period that followed the talk, I went up to Rinpoche. He was talking with various individuals but I felt compelled to introduce myself. Attempting to seem purposeful, I asked, “Rinpoche, what does tantra mean?”

Rinpoche looked into me with a growing smile. “Well”, he finally said, “if I told you you wouldn’t understand.”

I felt crushed. He wasn’t going to answer my question. I was mortified and immobilized. I must be unworthy. I must have asked a stupid question. But, perhaps because I was still standing there or perhaps because he saw my disappointment, he added so sweetly ” But I think you be finding out.”

Then he proceeded to give me a thorough definition of tantra. And he was right. I didn’t understand a thing he said except he mentioned something about continuity. But he spoke to me, smiling so much that his cheeks bumped up against the bottom of his glasses. At times I thought he was going to laugh. But then he’d look over the rim of those glasses–into my heart.

I was so happy. Then he proceeded to ask me questions, my name, where I was from, “What do you do there, sweetheart?”

He was playing with me. This was not how I’d preconceived a guru to be but I was magnetized. I mustered a sketchy answer, “Well, I’ve been teaching Shakespeare and Literature at Olympic College and”, feeling embarassed added, “a little yoga and Tai Chi on Bainbridge Island.”

Stopping pre-sip over his glass of Scotch, Rinpoche simply said, “Hmm, maybe you should see Boulder?”

I took it as command. I was invited. I would hitch a ride after the seminar, stay with my professor friend or with new sangha friends, I didn’t know but felt confident, welcomed, included.

The next evening Rinpoche showed slides of a trip he’d taken in the South West. The slides became a vechicle for him to illustrate the five Buddha families. He showed a Spanish stairway curving up a white stucco wall. The roof was tiled brick and the stairway had a black iron lattice railing. There were potted red geraniums on the stairs. “This is Padma, seductive. You want to go up the curve of that stairway. Even the little curved brick roof tiles are warm and inviting.”

I was intrigued. This was a teacher from whom I could learn. In meditating throughout the days I’d oscillate between trying too hard, sitting full lotus hoping to be enlightened, to being absolutely bored and willing to fantasize or do anything other than go through the endless boredom. There was no meditation instruction per se, just some suggestions to sit erect and be still. Rinpoche’s only comment was “Stop the flow of karma”.

How to do so we were evidently to discover on our lonesome.

The discussion group leaders brooded so profoundly over the subject of “Crazy Wisdom” that I was certain they knew a great deal but were just not letting on. The two men had in common the habit of wearing the same wool sweater for all seven days of the seminar, so one could notice them in the meditation hall even from behind. This was great for meditative discursiveness.

On the full moon day we were to recite the Sadhana of Mahamudra. Legal sized xeroxed sheets of this sadhanna which Rinpoche had composed a few years before while on retreat in Bhutan were handed out to each of us. I was struck by the poetry of it, especially the lines, “Good and bad, happy and sad, all thoughts vanish into emptiness like the imprint of a bird in the sky.”

Could that dissolve be anything like the boredom I shied away from during meditation I visualized a big magpie flying away until it became invisible. Whenever I remembered the line “Hey ho the happy yogi!” it made me feel just that. But basically the rest went right over the top of my head like some Vajrayana comic book tossed to me by a Tibetan more American-savy than I was. What stayed was Rinpoche’s sun disk face, his gentleness, his limping forward to take his seat before each night’s talk, his willingness to include everyone and to make everyone feel special.