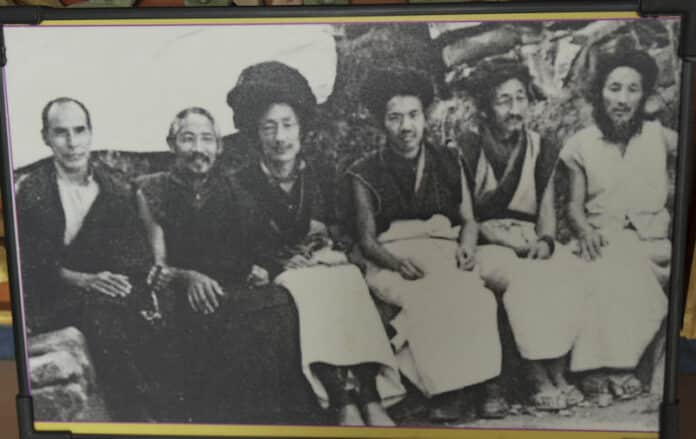 This two-part essay is based on Tashi Colman’s interviews with Togden Achö in the summer of 2018, in Bir, India. In it the Togden describes his earliest memories of Trungpa Rinpoche and then his experiences of the escape, some of which add important, often dramatic, details to what we knew — details which further highlight the journey’s extraordinary dangers.

Special thanks to Tashi Colman for conducting the interview, and Rigzin Wangmo for translation.

Trungpa Rinpoche was renowned in Tibet as a teacher. He was also widely known for his prowess in mirror divination, prasena, and many high masters consulted him for readings, including the Dalai Lama. While most practitioners of prasena could invoke the images and symbols in the mirror, or, alternatively, could see, read and interpret them, very few could do both. Trungpa Rinpoche possessed the rare power of being able to both invoke and interpret the divination.

Throughout our decade-long exploration of Rinpoche’s epic escape story, the subject of prasena has hung in the background – a faint, somewhat mysterious phenomenon that periodically appears on stage to make a brief statement on events before retreating back to the wings. Yet several survivors of the journey have told us of his frequent, indeed, daily, recourse to the mirror.

We don’t know how much of this episodic vagueness was Rinpoche’s choice, or was due to his collaborator on Born in Tibet, who apparently had a distaste for the non-rational or “mystical” and often chose to edit or exclude such material. (From Lion’s Jaws, p. 10)

In the book Rinpoche’s most detailed description of his use of prasena – or at least of the mirror’s indications – comes in his account of events in mid-1958, some weeks after he had left Surmang for the last time, when Khamtrul Rinpoche invited him to his monastery at Khampagar, then proposed that they conduct a divination on his, Khamtrul’s, escape. From the monastery they headed to a nearby retreat centre and:

“… pitched our tent in a circle of juniper and willow bushes. After devotional meditation, the prasena indicated that he should leave his monastery, but that his final destination should be India, not Central Tibet. It gave clear-cut directions about the length of time that he should stay in Tibet, the difficulties he would encounter, and the ultimate date of his arrival in India.” (Born in Tibet, p.139)

Following these directions Khamtrul Rinpoche was able to reach India with relatively little difficulty – his was the only party from East Tibet able to take all its baggage with it – and there re-established Khampagar Monastery in Tashi Jong, and also reinstituted the togden tradition.

The interviews with Togden Achö occurred at Tashi Jong. His memories, especially considering that he was recalling events from six decades ago, were remarkably clear, both in their detail and in their congruence with Rinpoche’s and other survivors’ accounts.

Our questions were largely focussed on what he knew of Trungpa Rinpoche’s use of prasena on the escape. We were hoping for a few insights on this obscure aspect of Rinpoche’s story, but the Togden offered us the crown jewels: telling us how Rinpoche came by the prasena siddhi in the first place.

Togden Achö related that Rinpoche, likely during one of his stays at Sechen monastery, simply expressed to his guru Jamgon Kongtrul the wish to acquire the prasena powers. The guru then said prayers and gave him blessings, after which – apparently without any further special practice, prayer or supplication – the siddhi gradually manifested to Rinpoche over time. It seems that in someone who was already a highly advanced practitioner, the siddhi could be somehow seeded, then naturally grow and unfold.

The Togden also confirmed Rinpoche’s rare capacity to both invoke and see and interpret the prasena’s revelations. He said that he himself could see nothing in the mirror. He also gave us considerable insight into the nature of prasena, on its main components, on the differences in quality between them and the differences in the abilities of practitioners; however, this material must await another time for relating.

Togden Achö’s only direct experience with Rinpoche’s prasena divination came during the escape, in June 1959. The Khampagar group had escaped from their monastery and found their way to the Nyewo valley, where they rested and thought over their options. Learning that Rinpoche and his group were camped on the plateau above, Achoe made the steep 9,000 ft. ascent to request his guidance.

Rinpoche first led the Togden away from the camp and up the hill to a spot surrounded by rhododendrons, saying that it was difficult to perform prasena with many people around. Commencing the divination, he began to describe the images that arose in the mirror; seeing a figure in the scene, Rinpoche said: “oh, that must be you …!” From the divination he told Achö that he would indeed reach India, but that his journey would be quicker if he joined Rinpoche’s travelling party. This Achö and the Khampagar group decided to do, and they stayed with Rinpoche until the crossing of the Brahmaputra, when they became separated by the Communist onslaught.

We had hoped that the Togden could tell us about how Rinpoche’s prasena may have guided the escape – specifically whether he’d heard of divinations that offered help in finding the way, perhaps even with day-to-day navigation.. Yonten Gyamtso, Rinpoche’s attendant, had told us that Rinpoche performed prasena each morning of the journey, then presented his reading at the leaders’ meeting. The Togden confirmed that Rinpoche summoned a leaders’ meetings every morning but, like Yonten, he didn’t go to them; instead, the Khampagar umdze, the leader of their small group, would attend and report back to the group.

The Togden did recall several occasions where Rinpoche’s prasena practice came up on the journey. Immediately following the avalanche on the pass from the Tong-gyug valley to the highlands, the Khampagar umdze said “oh, Trungpa Rinpoche foresaw that.” Later, when a beggar woman who had joined the escape collapsed and died, the umdze recalled that Rinpoche had said some while back that that would occur.

The last item that the Togden recalled about Rinpoche’s mirror divinations was in some ways the most intriguing.  In the desperate days of late November as the group neared the Brahmaputra, Rinpoche prepared people for the dangerous night crossing of the Chinese highway at the Serkyem Pass, when the hundreds of refugees would have to get across a road streaming day and night with military trucks without being spotted. Then the prasena gave direct and specific instructions: everyone must remove all shiny objects – knives, swords, brass ritual mirrors, etc. – from their belts and chubas and conceal them inside their bags or under their clothing.

As far as we know, neither Rinpoche nor the refugees would at this stage have had any experience of the power of truck headlights at night – how far the beams reached or how well they illuminated things. Prior experience with candles or flaming torches would have given them little hint of what they faced, and the prasena’s guidance seems to have been crucial.

If Togden Achö’s recollections shed no light on the question of the prasena’s possible help with navigation, in Born in Tibet Rinpoche mentions two cases of the mirror’s guidance. The first came as the group neared the Serkyem Pass, when they found themselves surrounded by mountains with no apparent way out. After consulting the mirror, Rinpoche led them on an exhausting trek through an area of large boulders, then over four mountain ranges before coming to the spot near the pass that they’d been aiming at for weeks. (From Lions Jaws, p. 205)

The second instance came as Rinpoche and the lamas, starving, emaciated and exhausted, descended the Himalayas’ southern slope. Again Tsepa the guide could offer no help in the unfamiliar terrain and Rinpoche turned to the mirror:

The vision’s directions were clear: after climbing the snow peak to their immediate west, they would see ahead of them another range with three separate crest lines; they should cross the center one, after which there would be no more high ranges to climb. (From Lions Jaws, p. 243)

Following the divination’s directions, after a few further days’ arduous travel they reached a point from where, looking back, they could see that if they’d chosen either of the other two crest lines, they’d have found themselves trapped far down impassable glaciers with no choice but to turn around and retrace their steps. In their precarious and enfeebled states, the backtrack would have likely proved fatal.

Auspiciously, following the interviews with Togden Achoe, the translator Rigzin Wangmo heard of an old monk, Lama Pema Tenzin Norbu, who is a student of Trungpa Rinpoche from Tibet. Tashi went to interview him at Choling Monastery in Bir.

Now aged 83, Lama Norbu took refuge as a baby with the 10th Trungpa Rinpoche. Later he received the Rinchen Terdzod in Tibet from Trungpa Rinpoche, who also conducted a prasena for him, predicting where he is now, telling him to go there and practice and he will attain realization.

Rinpoche also told him from the prasena not to join his escape as he would not make it to India if he did; he should instead go separately and by a different route. Following these instructions, Norbu left later and made it safely to India, arriving earlier than Trungpa Rinpoche. Rinpoche also said from the prasena that if the people from his village joined his, Rinpoche’s, escape, they would not make it; many of them followed Rinpoche anyway and indeed none of them succeeded in reaching India.

Lama Norbu saw Rinpoche again in India, once right after the escape and a second time in Bir where the Vidyadhara consecrated the ground on which Choling Monastery now stands. The lama has a picture of him on his shrine, and prays and meditates on him daily as his root lama.

On the Occasion of Thrangu Rinpoche’s 90th Birthday

Special Message from His Holiness the Karmapa

Chögyam Trungpa Rinpoche
Two seminars from the 1970s were edited for this volume on the life and teachings of Guru Rinpoche, or Padmasambhava, the founder of Buddhism...

The Path Is the Goal: A Basic Handbook of Buddhist Meditation