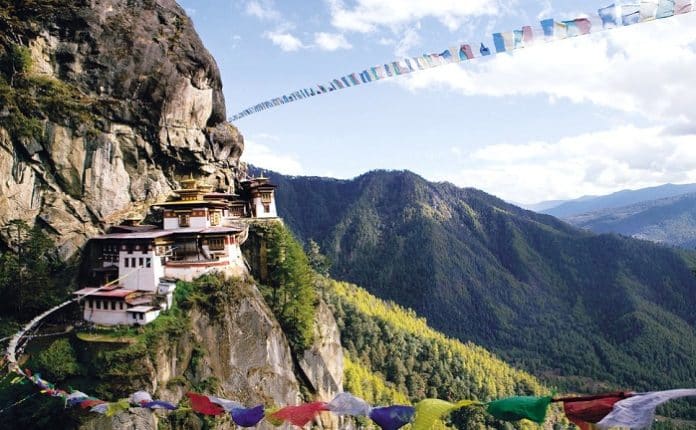 In this Kingdom of the Thunder Dragon
Where, uniquely in the world
the incomparable teachings of the Vajrayana
are protected and nurtured
by the wisdom and skillful means of
HIS MAJESTY THE KING,
by the awesome power of the LAND,
by the gentleness, good spirit and
hard work of the PEOPLE.

In this land a mere 24 years ago
the incomparable Vidyadhara,
the 11th in the glorious line of Trungpa tulkus,
Dharma Sagara, Ocean of Dharma,
from the sheer rock face of Taktsang,
evoking the great mind mandala
of Dorje Trollo, Karma Pakshi
Mikyo Dorje and Rangjung Dorje,
vowed to free those,
trapped in this 500 year dark age,
suffering at the hands of the three lords of materialism
who, having seized power, rule the world.

Riding the great white horse of Lungta
he put aside the venerated robes of a monk
and donned the armor of suit and tie.
He descending the great canyons, crossed the plains
and the mighty oceans,
and soon set foot on the Western continent, the new world
called North America.

There he established his Dzongs, his fortresses,
in the green forested mountains of Vermont,
in the rock faced canyons of Boulder, Colorado,
in the steel and glass canyons of New York City,
in the remote mountains of northern and southern Colorado,
in the smog and confusion of Los Angeles,
on the shore of San Francisco Bay,
in the western land of snow – Canada;
A network of fortresses in city and country
across the continent and soon
into the old world of Europe as well.

From these fortresses he went forth
Challenging the three lords,
their armies, servants and philosophers.
He unsheathed the sword of wakefulness
from its scabbard of discipline,
in the name of the welfare of all sentient beings,
with the inconceivable power
of crazy wisdom.

His skillful means created many gates
for beings to overthrow the oppression
of the three Lords.

Through the gate of Buddhism
un-tamable beings gathered,
magnetized by the sanity of his manifestation,
and the land around his Dzongs became tamed.
Having transmitted the profundity
of the Prajnaparamita,
and initiating many into the Bodhisattvas’ vow,
then, only three years after arriving in North America,
among the thousand foot rock spires, the Teton Mountains,
arising like stupas from Jackson Hole,
with thunderous warnings,
for three months he unleashed
the teachings of the incomparable Vajrayana
and set the un-tamable beings
upon the road to the highest teachings.

Through the gate of knowledge and creative arts,
philosophers, psychologists, scholars, teachers,
musicians, dancers, artists and poets
gathered in the name of the great Nalanda University
of the past and the splendid Naropa.

Through the gate of the military without aggression,
the discipline of kasungship emerged
in the great encampments
and on lonely overnight shifts,
revealing the experience of Victory Over War.

Then, in the midst of these great activities,
wearing a uniform of white, decorated with medallions,
he was summoned to the feet of the Rigden King.
There he received the transmission
of the ultimate and the relative ASHE
which had been guarded by scores of generations
Of Rigden Kings.

These are the weapons before which
The forces of materialism,
and the three Lords themselves
shrink in fear and despair.
Thus armed he arose as the
Profound, Brilliant, Just, Powerful, All Victorious
SAKYONG
and set forth
to join heaven and earth.

Then, with unerring accuracy
he bent his bow of prajna
and loosed the arrow of Shambhala,
un-deflected by the howling winds of confusion,
it pierced the hearts
of the un-tamable beings
and they were able to
set foot on the path of warriorship.

For ten years more his mandala expanded and ripened.
In Kalapa Assemblies he proclaimed, and manifest as
The Master Warrior, the Universal Monarch,
and set forth the stages in the education of the
Shambhala Warriors.

At last, having transmitted the
essence of the ultimate and relative ASHE
to his ministers, his generals,
and to a host of warriors in training,
and making these teachings available
to anyone willing and able to receive them,
and having prophesized
the appearance of enlightened society
in the midst of the dark-age,
and having clearly pointed out the skillful means
for establishment of enlightened society,
and having conversed with countless teachers and enlightened beings
Of the past, present and future,
Then
the glorious SAKYONG,
the VIDYADARA,
our teacher,
our dearest friend,
Chokyi Gyatso,
dissolved into rainbow light.

He said of himself,
“Born a monk, died a King”.

We, his students,
despite our neurotic limitations
and our lack of discipline,
have received the blessings
of these teachings,
and the responsibility
for carrying on his vision.

Today, as we experience the dignity,
gentleness and power
of this Dragon Kingdom, Bhutan,
let us renew our own vow
to manifest the Great Eastern Sun
in our personal lives
and, together with all people of Good will,
in our societal lives.

May the Great Eastern Sun
Be victorious.
May peace prevail over all the earth
For all beings.

Chögyam Trungpa on “The Teacher”