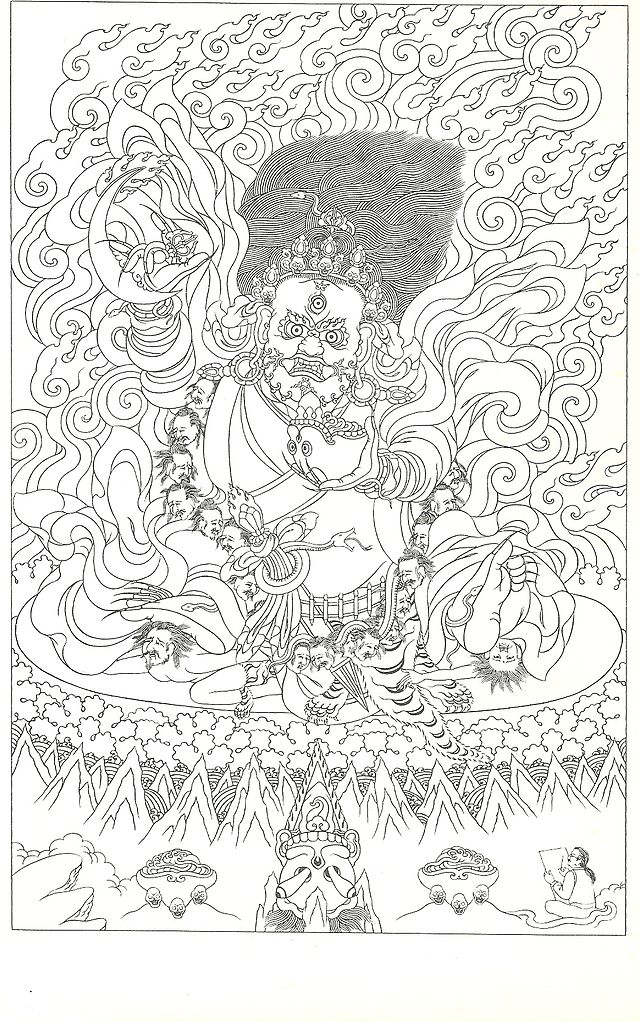 In the late 1970s the Vidyadhara was making fairly frequent visits to Boston Dharmadhatu. Energy was sparking and new people were popping up almost daily.

One of these was a young woman we’ll call Jane, who stood out by her impressive aggression towards male authority figures. Once she waited in ambush for the coordinator, launching a sudden physical assault on him as he entered the building; as Rusung I had to push her into a corner and hold her there until the coordinator was safely in his office.

Rinpoche’s Boston residence was at 169B Upland Road, one of the community houses in Cambridge. He received people in the living room, which had large sliding doors directly opposite a Victorian bay window. We had placed his seat in the curve formed by the window, a view commanding the room, as was his custom. With Rinpoche’s back to the street, and the window only a few feet from the pavement, we would draw the curtains behind the chair to shield him from outside view.

One afternoon at about 4:00 PM, Rinpoche left his chair to go upstairs to his bedroom. A minute or so later a brick crashed through one of the bay windows. It had obviously been directed towards Rinpoche’s seat. We were jolted awake: we’d come to expect the unexpected when he was in town, but this was something new. The shock was mixed with a vast relief that, with pretty precise timing, he had taken himself out of harm’s way; it seemed to be a raw confirmation of the rumour that tantric masters could anticipate and avoid the scene of an attack.

After checking that the House Guard was covering the situation indoors I ran into the street and then, seeing no-one, jogged around the neighbourhood for several minutes trying to spot Janefor everyone knew instantly whose brick it was. With hindsight it was surprising that none of us had imagined that she would go that far. After the attack we tightened up as far as we could: we didn’t have the manpower to station a permanent outside guard, but we stepped up patrols around the house and let Jane know that if she was seen in the area we would call the police.

We needn’t have bothered. Great vajra gaps had already opened in our security net. From then on, whenever Rinpoche was in the living room he took to opening the curtains wide and standing at the window peering out into the street, apparently with the sweetest air of anticipation as if waiting for the return of a passionate and cherished lover.

Return she did, in spite of our heightened, edgy, vigilance. This time it was around 9:00 PM, in the evening, when Rinpoche was downstairs, but this time Jane flung a heavy roof tile at the screen of the front door near the living room. We called the police and within a few minutes, with the usual self-generated fanfare, four or five Cambridge City Police patrol cars arrived. It seemed overkill but it was, after all, Rinpoche in residence. This time Jane was waiting nearby and was taken into custody.

Rinpoche said to invite the police sergeant in and to bring Jane along. He may have invited the rest of the contingent in tooI don’t recallbut whether he did or not the dining room soon filled up with ten or so people, six or seven of them burly blue-clad types.

Rinpoche was clearly loving every moment. The atmosphere was warm and comradely, much as if a time-out had been called at encampment to review the situationas if Jane was a captured raider, the rest of us good friends and fellow-officers, all of us having simply the grandest and most jolly good of times.

After welcoming the policemen he directed his remarks largely to two people. He talked of Jane as being an essentially good and decent person who nevertheless, needed to understand that actions had consequences. Then, with a gentle yet unmistakeable irony which in another atmosphere could have been shattering, he introduced me as the person in charge of his security.

Rinpoche concluded his debriefing by thanking and graciously dismissing us all, the beaming men in blue escorting Jane to a patrol car and a few days’ free room and board courtesy of the City of Cambridge, me to a renewed if somewhat abashed sense of duty.

After her release Jane came to the Dharmadhatu more often and, although there were some pyrotechnics still to come, she became a cheery member of the community, much appreciated for her direct and spunky intelligence.