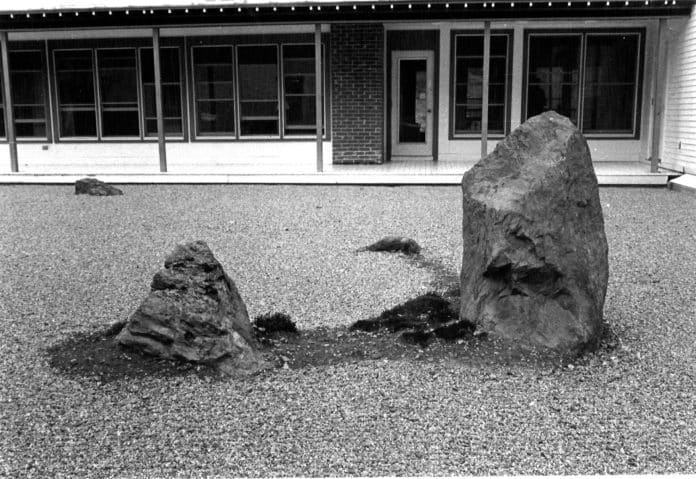 In the 40 years since the rock garden at Karme Choling was conceived, designed and installed, I’ve often been asked how it came to be. I’ve also heard, directly and indirectly, how significant the experience of the rock garden has been to different people. So it seems like a good time to describe its origin. Was the rock garden the Vidyadhara’s idea, or my idea? The answer is it was sort of both.

I first saw the future rock garden space in 1978 when my family decided to stop at Karme Choling to break the long drive back to California from the Seminary at Dixville Notch. The Vidyadhara was in residence, and on that first afternoon hosted a barbecue in the grassy area outside the new main shrine room. I noticed that the patch of lawn also served as a communal ashtray. I was sitting around on the porch with others when I realized that the space would lend itself to a Japanese-style rock garden. My background was in landscape gardening, and although not formally trained, I had a deep appreciation for the aesthetics of Japanese gardens. Someone said to me that Rinpoche had been thinking of the same thing.  So, with pencil and notebook in hand, I went up to talk to him.  When I told him my idea, he immediately said, “Oh, maybe you should come and do it!” The vajra hook sank deep in my heart, although because I was living in Santa Barbara, I was uncertain how to make it happen. Back in California, I connected with David Nichtern, who was about to move East to become the new director at Karme Choling, and together we figured out how I could join the staff.

On the return drive the following summer, I stopped in Boulder to attend the Visual Dharma seminar and consulted with the Vidyadhara at the Kalapa Court. He said he visualized a “Shambhala garden” for the space. When I asked what that was, he said, “You know—manifesting the principles of heaven, earth and man, like calligraphy and flower arrangement.” I had been studying these principles with him, so I thought I knew what he meant. He provided a sketch for the three rocks of the central formation, (see illustration) but left the actual design to me.

When I got my bearings at Karme Choling, Todd Creamer and I began scouting the land for suitable rocks based on the shape and proportions in Rinpoche’s original sketch. It was a question of first thought, best thought; there was no second guessing. Then, using the Karme Choling tractor, a VW Beetle hood as a skid, and dathun slave labor, we extracted the rocks and brought them down to the site. Using hand tools, I prepared a level surface and positioned the rocks. Again, this was done quite quickly. In addition to the Heaven, Earth and Man cluster, I added two flatter, outlying rocks. Then I chose gravel at a local quarry and had ten tons delivered and dumped in the driveway. Then two laborers and I laid the gravel down over plastic sheeting using wheelbarrows.

I was quite nervous the following summer when Rinpoche visited for the tenth anniversary celebration and saw the garden for the first time. With his big, Cheshire-Cat grin, he said, “The Japanese would be very proud of this!”  At that time, I told him I thought that the energy “leaked” toward the driveway and that perhaps we ought to have some kind of a fence or boundary. He agreed and drew me a design that utilized irregular stone cylinders of different heights and wooden rails (see illustration below). However, I didn’t know how to acquire the materials or the expertise and the project did not go forward.  Two years later, I returned to California.

Over the years, various changes have been made, including the addition of a formal Japanese fence for a number of years. The biggest modification involved removing the rock garden altogether then reinstalling it after the creation of the internal corridor next to the dining room in 1997. The Earth Rock broke during this process and had to be replaced.  Other proposals have been brought forward, including converting the garden to more “useful” functions like more buildings or a formal entryway. Thankfully, this has not happened, and the rock garden remains central to Karme Choling’s physical mandala and committed to “uselessness” and the Vidyadhara’s vision of broken heart, sacredness and vast mind. 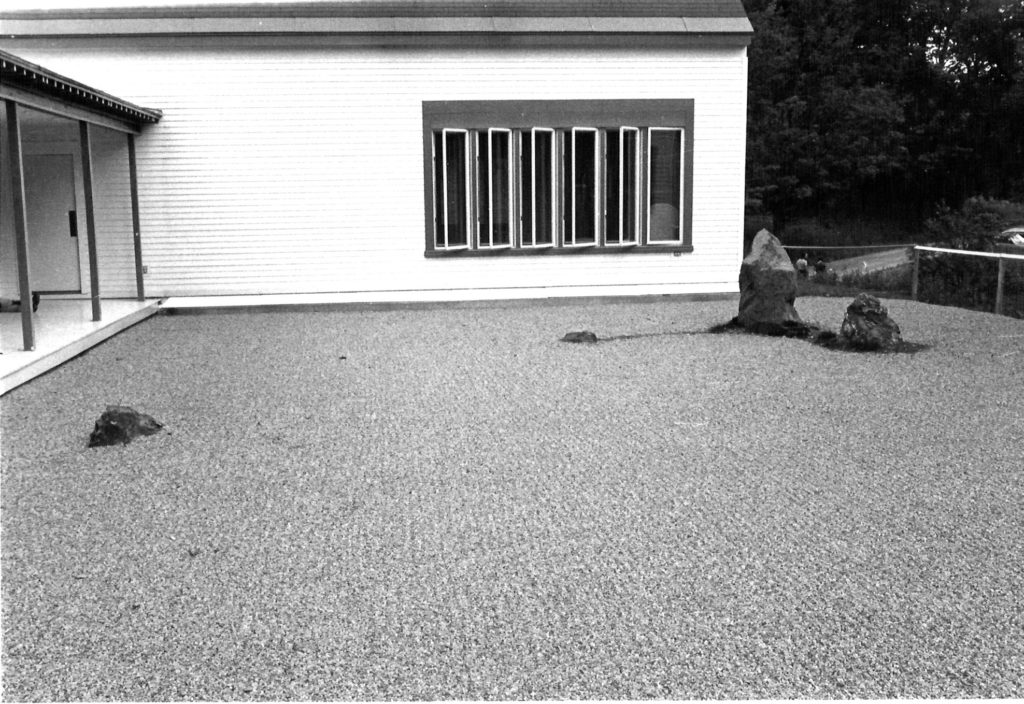 (This article was written with the help of Tony Cape, who was a wheelbarrow man on the original project.)

When we talk about conquering the enemy, it is important to understand we are not talking about aggression. The genuine warrior does not become resentful or arrogant. Such ambition or arrogance would be simply another aspect of cowardly mind, another enemy of warriorship in itself. So it is absolutely necessary for the warrior to subjugate his own ambition to conquer at the same time that he is subjugating his other more obvious enemies. Thus the idea of warriorship altogether is that, by facing all our enemies fearlessly, with gentleness and intelligence, we can develop ourselves and thereby attain self-realization.