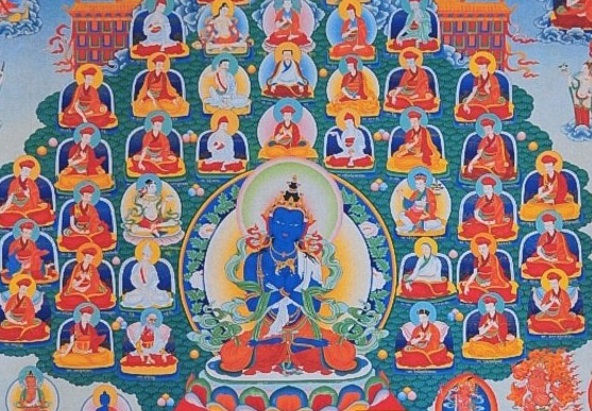 During the time just prior to the cremation of H.H. the 16th Gyalwa Karmapa I was fortunate to meet Trungpa Rinpoche at Rumtek Monastery in Sikkim. As an American I had come to India/Nepal in 1972 with copies of Cutting Through Spiritual Materialism and Meditation in Action, which were my first introduction to the wisdom of the great Kagyu masters.

At Rumtek Monastery years later, at the time of the passing into nirvana of H.H.Karmapa I entered the room where Trungpa Rinpoche was seated with their Eminences Tai Situ Rinpoche, Shamar Rinpoche, Jamgon Kongtrul Rinpoche and Gyaltsap Rinpoche. I was wearing white zen and shentab having some years before received the Demchog “Tra/Hair” Wang in Swayambhunath, Nepal, as it had been passed down by an unbroken lineage from the time of Milarepa and Rechungpa. As I sat down Trungpa Rinpoche said to me,

“We’re going to test your realization”.

I remember looking up at the gurus of the Kagyu lineage and experiencing the blessing of that moment. I innocently replied. “I haven’t done the practice yet”.

I later found out he had wanted to dip my cloth in water for me to dry. Lucky for me I gave a suitable answer and got off the hook.

I feel fortunate to have had some connection with Trungpa Rinpoche as a lineage guru in such a way. Some years later I attended the cremation of Trungpa Rinpoche in Vermont. The sky was clearly filled with rainbows and the blessings were apparent. I felt filled with Rinpoche’s blessing that day.

Through the years the writings of Trungpa Rinpoche continue to be a source of teaching and inspiration.