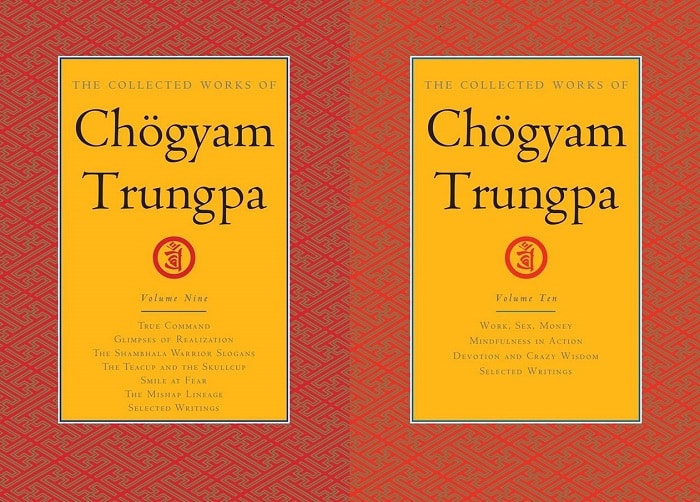 Sixteen years after the parinirvana of the Vidyadhara, the Venerable Chögyam Trungpa, Rinpoche, eight volumes of his Collected Works appeared—in both hardcover and digital form—over the course of 2003 and 2004. The set included ten of the thirteen books published in English during his lifetime (only excluding translations he worked on, while including the introductions he composed for those translations: The Tibetan Book of the Dead, The Rain of Wisdom, and The Life of Marpa).

A further thirteen books published posthumously during that sixteen-year period appear in the eight volumes, making 23 books in all contained in the compendium. The volumes are organized very cleverly in a mixture of the chronological (Born in Tibet is book one in volume one) and the thematic (one volume is art and poetry, another brings together Shambhala teachings). In addition to the books contained in the Collected Works, a further 101 “selected writings” of all shapes and sizes are provided as a further testament to the range of the Vidyadhara’s reach and the depth of the treasure trove of teachings he left—exquisitely, albeit only partially (!), tapped into in these hefty volumes. On top of all that, there are pictures and illustrations and what have you, and a massive index, making for an immersive experience that goes beyond simply reading. In addition to what has yet to be published and what is restricted from wider publication, the Collected Works has purposely excluded the vast collection of teachings from the 13 Vajradhatu Seminaries he conducted, which appeared topically organized and condensed in the three volumes of The Profound Treasury of the Ocean of Dharma, published in 2013.

You would think after all that work, Trungpa, Rinpoche’s editors, translators, and publishers would have exhausted themselves and retired to lie in the dirt somewhere, but alas they are proving themselves almost as determined and indefatigable as the man himself. The goal of publishing all of the Vidyadhara’s works (other than the ones mentioned above) in a vast corpus of 108 volumes exceeds what can be accomplished in one lifetime and has the suggestion of quixotic unattainability about it, like Milarepa building his towers or Icarus flying into the sun. And yet the books keep on coming.

Shambhala recently published volumes nine and ten of the Collected Works. Like two dharmic barbells, these are truly and figuratively weighty tomes, at 858 and 760 pages respectively. They contain a further eight books published since the previous volumes; the Shambhala Warrior Slogans originally created as a card set to accompany Shambhala: the Sacred Path of the Warrior; and an additional 42 selected writings—another whopping helping of dharma that could keep you occupied for months, if not years.

Before I discuss what you will find specifically in volumes nine and ten, I first have to mention the introductions to all ten of these volumes. Carolyn Gimian, longtime editor for the Vidyadhara and director emeritus of the Vajradhatu Archives, carefully curated and edited every volume, spending time on editing and writing retreats in a farmhouse on the side of a mountain in Tatamagouche, Nova Scotia. It’s where she made substantial debt repayments to the guru, and the power of those payments shines through in the introductions she so carefully crafted for each volume. They place the works within the context of the Vidyadhara’s life and journey and his aspirations for his students, for Vajrayana Buddhism, for the dharma, and for the world at large. They also serve to contextualize each of the (sometimes obscure and bizarre) selected writings. They’re delightfully and lovingly written and could form a book in themselves. Taken together with the volumes, they allow a newcomer to grasp more than a little of what the Vidyadhara’s teaching is all about and allow an oldcomer to see anew the freshness and brilliance of this gold mine of teachings.

Volume nine contains True Command, a collection of teachings about the Dorje Kasung* and the principle of protection that offers metaphors and insights you will find nowhere else. While they were delivered to a specific audience for very specific purpose, they carry broader messages—particularly as concerns how students enter the vajra world without perverting the very thing they came for in the first place by trying to create personal territory out of unconditioned space, which is uncompromising and fear-inducing. And speaking of space, the next book in the volume is Glimpses of Realization, which is a pithy little treatment of the three kayas. It alternates between crystal clear and hard to grasp, and I suspect what falls into those two categories differs depending on who’s reading. The volume also contains Trungpa Rinpoche’s teaching on the meeting of Zen and Vajrayana, The Teacup and the Skullcup, which is significant given all the many forms and practices he adopted and adapted from the Zen world. He loved Zen as a kind of beloved but farflung cousin to the Vajrayana world he emerged from.

Volume nine is rounded out with two more books:

Smile at Fear—another short and powerful collection of teachings in the Shambhala tradition that is notable for bringing together high-flown vision and dirt-under-the-fingernails practicality, and

The Mishap Lineage, a love letter to the Kagyupas, who offer a unique cocktail of “being emotional and hardcore at the same time.” Yet another line that stops you dead in your tracks.

It’s all finished off with 18 desert toppings—i.e., selected writings—that run the gamut from a catalog from a 1982 dharma art installation (with accompanying  pictures of dharma art rooms he designed) to a rumination of the relationship between the founder of Sikhism, Guru Nanak, and Vajrayana Buddhism to a detailed treatise on aspects of world affairs in the late seventies to brief sketches of two ideas for avant garde documentary films. Do these hold together as the work of one person? Not exactly, and yet there is a certain je ne sais quoi. A few gems from these selected writings:

“The American contribution to the People’s Republic will obviously manifest in further technology, further upgrading the people of China—which will provide the potential corruption of China. Joke of all jokes: China becomes one of the most hierarchical societies, against the vision of Marx and Mao Tse-Tung himself.”

“Both Guru Nanak and the Buddha said to their followers that the real nature of the universe should not be limited by the idea of a personal god or gods.”

Volume ten contains three books—Work, Sex, and Money, Mindfulness in Action, and Devotion and Crazy Wisdom—which are each lengthier treatments than the books that form the core of Volume nine.

Like its title, Work, Sex, and Money provokes, and takes us again and again down various paths that demonstrate that the Vajrayana relishes the gnarly things we try to avoid, suppress, and step around, because they are the very ground of enlightenment.

Mindfulness in Action begins with some of the simplest and most evocative metaphors for meditation practice (for example, Trungpa Rinpoche compares following the outbreath to sliding down a sliding board at the playground and just letting the inbreath be there to climbing up the ladder). Eventually, the book turns to the real point of mindfulness and awareness: a hardcore and emotional (see above) exploration of the intelligence of emotions.

Devotion and Crazy Wisdom unpacks the Sadhana of Mahamudra, and as the Vidyadhara liked to say, dichotomizes the dichotomies. In this case, the dichotomies at the heart of the Sadhana are the spaciousness of Maha Ati and the vivid perceptions of Mahamudra, insight and emotion, gradual and sudden, control and relaxation, and of course, devotion and crazy wisdom, to name just a few. I’ve re-read it many times and, far from overconceptualizing the raw power of the Sadhana, it takes that power to another level.

Of the 24 selected writings that finish off Volume ten, half are messages from the Vidyadhara published in the Shambhala Sun, including pieces on oryoki, death, business, Buddhism in America, and the meaning of ngedon (from the opening address to the Ngedon School of Higher Learning in 1982). The remaining selected writings speak for themselves, with titles like A Sense of Humor, Let Ego Have an Energy Crisis, Jolly Good, Why We Meditate, and Find Your Heart in Loneliness.

Open to any page, and you will always find a treat:

“It’s not Buddha-ism. The religion of Buddhism isn’t necessary, particularly, but the disciplines that we have developed over twenty-five hundred years are necessary.”

“Joy here is not pleasurable in the ordinary sense, but it is an ultimate and fundamental sense of freedom, a sense of humor, the ability to see the ironical aspect of the game of ego, the playing of polarities. If one is able to see ego from an aerial point of view, then one is able to see its humorous quality.”

The Collected Works volumes are expensive for a person of modest means, but they are indeed a great long-term investment for those who like to have their dharma well-organized and at easy reach. The fact that they are available digitally adds another means of accessing and studying the dharma. I have all the volumes and the Profound Treasury available on my phone and iPad, which means I don’t have to travel with heavy books. The fact that they are searchable is an added treat (Where was that teaching about samaya? Let me see what he said on sambhogakaya in different places.)

The physical volumes fortunately have been purchased by many dharma centers and libraries, which is one of the very reasons to create volumes like this: to have a record of these teachings distributed around the world. If you find you don’t have access, see if you can request your local library or dharma group to purchase a set, or gently suggest to your children or your parents that one or two of them (or more) would make a great birthday gift. And if you’re into that kind of thing, get the e-book version: for once, your smartphone will live up to its name.

* The Dorje Kasung is a service organization that was formed by Trungpa Rinpoche to protect the teacher and the environment in which the teachings are presented. For more information on the Kasung, see Volume Nine of the Collected Works.

Chögyam Trungpa Rinpoche
In this address, Rinpoche talks very movingly about our individual responsibility to benefit everyone and anyone with whom we are connected.

The Genuine Face of the Guru