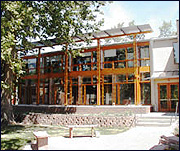 1974 Boulder, Colorado 700 hippies cross-legged chanting, “Aditia Radayam Punyam Sarve Shatru Vina Shanum.” Clueless, I sing along, staring at braless, white peasant shirted young women, longing to be their zafus, ecstatic nomads, whirling dervishes, hands to the sky, Baba Ram Das – Guru Wanna Be, Borsch Belt Comedian, LSD Pioneer – in between jokes, has us pick up one grain of rice at a time. I am dying for a cheeseburger.

My friend explains the two camps – Ram Das and the Hippies vs.Trungpa Rinpoche and his students. “What’s the difference?” I ask. “They say Rinpoche is the real thing, actually enlightened, but his students have short hair and wear suits.”

June 1977, I stop for Allen Ginsberg hitching to the hospital – he can’t pass a kidney stone. Peter Orlovsky climbs into the back and tells me I will be their driver for the rest of the summer. Allen wants to give me meditation instruction, promises to introduce me to Corso, Burroughs, Sanders, Kesey, needs help with his class at Naropa.

July, Rinpoche shows up an hour late. Everyone is talked out and ready. The air is crisp, Corso, drunk, slurs, “Rinpoche is the man, the big daddy, this is his scene.” Even Burroughs, who never comes to the lectures, admits, “Rinpoche is quite a guy.” The room is dead silent, Rinpoche bangs the mic; the audience jolts. He speaks softly about path and letting go, spiritual materialism, refuge, bodhisattva, samaya. Later I ask him, “Rinpoche, Sir, we are 15 miles from a Nuclear Weapon’s plants, how is Buddhism going to stop Nuclear War?” “Just sit, ” he responds, “the big bomb is your mind, just sit.”

Judy Lief, very pregnant, wakeful and sweet, explains the bardo in hot, August, Tibetan Book of the Dead classroom. How ironic I think – about to give birth, talking about death. Too many lights, green light, red light, white light, I’m screwed, I’ll be reborn as a chipmunk if I’m lucky.

This is Rinpoche’s Naropa. Naropa, where, Tsultrim Allione guest lectures on crazy wisdom and amrita recipes. Where Nancy Stark Smith, Meredith Monk, and Barbara Dilly, glide across shinny dance hall floors. Where the sunrises with Batan’s Tai Chi class and Fugman Ed Sanders investigates everybody except himself. Where Anne Waldman and Simone Lazarri chant feminist odes at the Lilith bookstore. And the best minds of Ginsberg’s generation Ed Dorn, Gary Snyder, Philip Whalen, sing songs of themselves. There is room for everyone at Rinpoche’s Naropa. Room for tonglen with Pemma Choden, for brilliant lectures from Reggie Ray, David Rome, Judith Simmer, the Lopon. There is even room for me, a Jewish hippie from Roslyn, trying to find himself.

The Guru has created outrageous excitement, miles of space and sanity, dozens of opportunities to stop running:

He is Venus at night,
A cold, clear, blue highland lake,
A forest of proud redwood trees,
A field of flowers dancing.

Soft as a kiss,
Genuine as rain,
Confident as a mountain,

I smile and cry
And remember what I always knew
And wanted so badly to share,