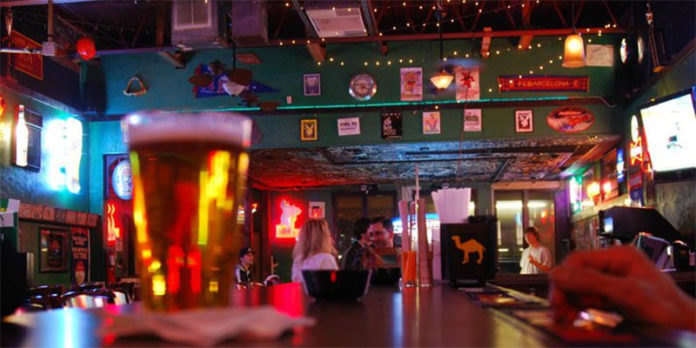 It was back in 1972 or maybe 1973. Trungpa Rinpoche was invited to give a talk on Buddhism at a Quaker retreat center in the Pocono Mountains in Pennsylvania. He drove down from Karme Chöling with a small group of his students, and I, who had been involved with him for a long time, drove up from my home near Philly to hear this lecture.

In the evening, after the talk, Rinpoche expressed an interest in going out to have dinner in the neighboring little village with his students. His hosts informed us that there were only two choices. Either the clean but simple family-style restaurant or a “redneck” bar with table service, which they didn’t think would be quite as suitable. Rinpoche decided on the bar.

The place had the typical small-town tavern atmosphere: clean enough, with a pool table opposite the bar and a room in the back large enough for six or eight tables. We pulled three together and enjoyed a modest banquet from the middle-America menu, accompanied by pitchers of beer that we lingered over into the night.

Although our waitress initially took the wetting in good humor, it was obviously becoming too much for her to tolerate. I felt sorry for her, who seemingly had done nothing to deserve such treatment, and I was somewhat embarrassed to be a party to Rinpoche’s uncouth behavior. At the same time, I was pleased to be in the company of one who could be so outrageous in public. I was also beginning to fear how far he would take it.

After several pitchers of beer and considerably more wetting, our waitress warned us that she had had enough of the game and that we would have to leave if Rinpoche didn’t stop squirting her. He continued on with serene deliberation, until we were asked to vacate the premises. On the way out, passing the pool table where a game was in action, Rinpoche paused to deliberately joggle a player’s arm just as he was making a shot, causing general consternation and some nasty words spoken in anger. As we were paying the bill, one of the players came over to me asking who this Chinese guy thought he was. I replied that he was not Chinese but Tibetan, and a famous teacher of Buddhism.

Out in the parking lot, after we had all gotten into the car with the windows open on this warm summer’s night, a man approached from out of the gloom with a rifle in his hand that he trained on Rinpoche, who was sitting in the front passenger’s seat. I was sitting directly behind him, looking up the barrel of the gun, and I clearly heard the man say, “I’m going to fucking blow your head off, you fucking chink bastard.”

I’m thinking that this may be my last moment on this earth. Then Rinpoche draws his own weapon and commences to shoot the would-be shooter with squirts from his water pistol while repeating,

“Go ahead, shoot” and “Are you chicken?”

The rifleman seems stunned, is speechless; immobile, a looming, vivid menace, but without any substance or action.

After a time our driver decides that it’s okay to put the car in gear and we slowly exit the parking lot, returning up the hill to the retreat center, now all dark, shuttered and silent, late on this peaceful summer’s night.

In appreciation of Thrangu Rinpoche