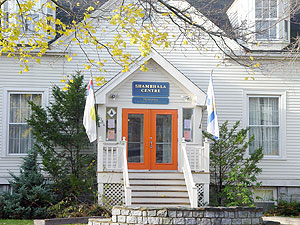 Walking toward the Shambhala Centre on Sunday with my daughter Amanda (visiting from Hamilton), we blended in with the flow of new and familiar community members also entering the already buzzing warm space. Kasung took note of our arrival as we filed into the practice environment of the main shrine room … with all previously arranged seats taken. No big deal, a couple of shuffled gomdens later and we were settled in for the address from His Majesty.

The shrine room was warm and bright with the lighten-ing touch of many hands … brilliant flower arrangements … the sheen of a new paint job on the puja tables … the detail of matching plates and tiger-lion-garuda-dragon colored napkins.

Soon, President Reoch was visible on the screen in front, speaking from Warsaw and the event of the first Level 1 Shambhala Training there. His words echoed electronically and emotionally … reminding us of the many Shambhalians we are linked to worldwide.

His Majesty’s loving address followed, written from retreat. It was evocatively poetic and laden with encouragement and suggestions for being in the place of peace. Listening to his words I felt the surge of possibility and responsibility; that this small community founded by Trungpa Rinpoche; that I am part of, can and is, truly able to harvest peace for the world.

After the address, we further delighted in many home-cooked harvest desserts and snacks, with wine and sparkling water tickling our throats. There was much conversation and laughter. We raised funds, welcomed new members, thanked our director, witnessed the oath ceremony for our new Shastri and acknowledged transitions in staff for the Halifax Centre. So much going on in such a short time! You really had to be there to take it all in…next year I plan to start the day with the Sadhana of Mahamudra practice in the morning; which I’m sure influenced the great feeling at the Shambhala Centre this year.

Denny Blouin
The story of the escape lead by the just-turned-twenty year old young man in far eastern Tibet, whom the world would later come to know as the Vidyadhara.

For Generations to Come