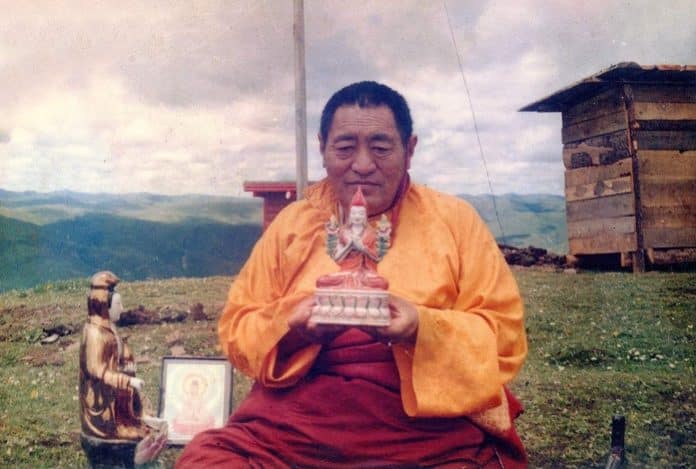 In 1993, Jigme Phuntsok Rinpoche visited North America where he met and taught Trungpa Rinpoche’s students in Colorado and Nova Scotia. In this audio recording from Boulder, June 27, 1993, Rinpoche talks about the Kingdom of Shambhala and the twenty-five Rigdens. The transcript below is an excerpt about the time of the twenty-fifth Rigden.

After the Twenty-fifth Rigden has ruled Shambhala and propagated the teachings for 97 years, there will come a time when it will be very difficult for anyone to even hear the name of Lord Buddha or his teachings. Not only will the name of dharma will be unheard, but also the outer aspect of the Shambhala Kingdom will already be quite barbaric. When the outer barbarians of the kingdom begin to penetrate into the inner kingdom, the Twenty-fifth Rigden will become aggravated and that is when he will call his warriors into action.

He will display the full glory of his miraculous abilities. He will mount his stone horse, and throw a huge meteorite bolt, which is like a spinning wheel, into the sky, and he will travel to the four continents of this universe, east, south, west and north. He will travel in this way for one year, and during that time he will again establish the doctrine of the Buddha in all four continents. Then, when he returns to his throne in Shambhala, he will be seated for yet another 100 years. Then he will have two sons, and these two sons will propagate the Kalachakra doctrine for thousands of years. This is just a very brief background of the Shambhala kingdom at the time of the Twenty-fifth Rigden.

Now, as for your root teacher, Trungpa Rinpoche and his connection with Shambhala—he in fact will be this rigden of whom I speak. This is why he has already set up the auspicious signs and indications by donning military uniforms and wearing things on his body, which are the signs of the costume that the rigdens wear, and so on and so forth. These are the signs of his future incarnation, and so all of you who have had the great fortune to see his golden face and to hear his teachings and to uphold his dharma tradition, which is the great and glorious tradition of the Kagyu lineage, will all be reborn with him at that time in Shambhala as his very warriors. Especially if you had the opportunity to really practice the dharma in a deep way at the same time that he did, you’ll be reborn as one of his generals.

In terms of what he was able to accomplish, his fame is even greater in Tibet than it is here, and even in the land of the Arayas, India, he is more famous there, or more well known for his enlightened deeds than he is here in America. However, in India, there was already the presence of many great masters. That is why he came to this country at a time when it was difficult to even hear the name of the Buddha or even hear a word of the dharma, or even see the sight of the sangha. He came and he established the root centers and all of the branches, which are more than 108, and brought the greatest lamas here to spread the teachings.

This is the type of enlightened activity he carried out in this land, and it shows his immeasurable love and compassion. However, for me to tell you about Trungpa Rinpoche is like somebody telling you something about a member of your own family. It is probably not necessary. However, I have heard about his enlightened activities for a long period of time, and now that I am here, I can see it for myself. It is quite astonishing!

Thank you to Rinpoche’s interpreter, Sangye Khandro, for her permission to use her interpretation here, and thank you to Alan Kelly, for trancribing the talk. Thank you, also, to Christie Cashman for bringing this talk by Jigme Phuntsok to our attention.

Usually we say that in theistic traditions you worship an external agent, and in nontheistic traditions you do not worship an external agent. Nonetheless, in either case you might just be looking for your version of a babysitter. Whether you hire a babysitter from the outside world or from within your own family doesn’t really matter. In either case, your state of being isnt being expressed properly, thoroughly, because you are trying to use some kind of substitute. We are not trying here to sort out which tradition, or which particular type of merchandise, is better. We are talking in terms of needing to develop a personal connection with ones body and ones mind. That is why the contemplative traditions of both East and West are very important.