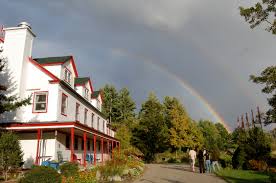 I had just finished an interview with Rinpoche, and started to get up to leave…he said “You can stay…..if you want.” I sat back down and in was led one of the architects who were involved with the planning of Karme Choling’s first expansion….before Harold Rolls. This gentleman sat down in front of Rinpoche, and began to explain his ideas about the project very reasonably. Rinpoche was silent. As the man talked on, what he was saying became less rational until it seemed truly bizzarre. Rinpoche didn’t say a word. I didn’t know if he had a silent buzzer to alert his attendants, but at some point, two people entered the room and without a word, lifted this gentleman up, still talking, and led him out of the room.