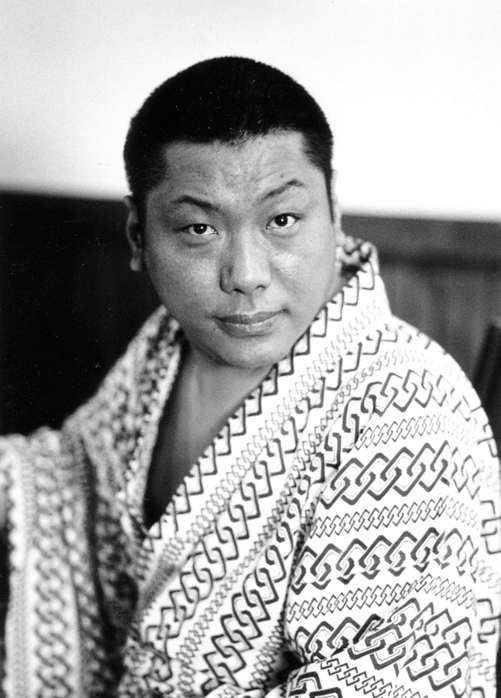 In 1981, even though we were not tantrikas yet, the Vidyadhara invited some members of the Nalanda Translation Committee French Section, which was established in Montreal three years before, to the Vajradhatu Seminary held at Chateau Lake Louise in Banff, Alberta.

He wanted us to attend a few working sessions with the Nalanda Translation Committee members so that we would see how our colleagues, who worked then under his direction—from Tibetan into English—approached the art of translation. I was then traveling with Simon Lahaye and recall that we arrived quite late at night and got up too late in the morning to get any breakfast. We were invited to find leftovers in the hotel kitchen. So we walked into this huge kitchen and saw a man’s back and kasung standing on each side of him. We walked a little bit more and suddenly the man, wearing a kimono, turned towards us with a huge smile: it was Chögyam Trungpa Rinpoche.

I walked directly towards him and kissed him on the right cheek while noticing that he had a pimple on the left cheek. Since these Chronicles are reaching a multicultural audience, I should say that it is a tradition for most French people to kiss people they feel close to. After the kiss, Rinpoche, radiant and motherly-fatherly, asked us if we had a good trip and welcomed us to Lake Louise with his legendary warmth and mischievous gentleness.

After he left the kitchen, there was a joyful silence in us and around us. But it didn’t last long because I started to play with two main questions in my mind. 1) Should a beginning student kiss the Buddha? 2) Why does the Buddha have a pimple? It was easy to find an opinion about the second question. Elisabeth Gold, the doctor who took care of Rinpoche during the 1981 Seminary, was then a Montreal Dharmadhatu member. So I asked her why her patient had a pimple on the left cheek. She told me: “I have been telling Rinpoche over and over again to stop drinking Coca Cola in the morning, but he won’t listen to me.”

Over the years, this simple story has been filled with numerous meanings for me. I have come to the conclusion that it is a good thing to kiss the Buddha. It is also good to know that some buddhas drink Coca Cola in the morning. And it is even better to know that they don’t always listen to their doctors. But the most important thing is knowing that when a buddha has a pimple, he doesn’t try to hide it.

Dzongsar Jamyang Khyentse on the Passing of his Father, Thinley Norbu...