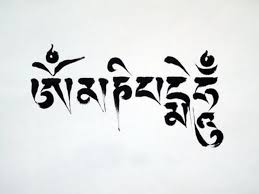 One day in the sitting room of the Kalapa Court on Mapleton Avenue, around 1977-78, I was attending Rinpoche as a Black Guard. He asked me to take a message. With the nearest pink message pad he dictated a small phrase in Tibetan, which we translated. He said it was from the Rinchen Terzod. I don’t remember asking who the message was for. I put the message in my jacket pocket. At the end of the shift, I went home and leaned it upright on a tall dresser. Before long I could remember this short Tibetan phrase from the Rinchen Terzod.

Many years go by and pretty much every day I would think of this Tibetan phrase and what it meant in English. It was an unsolved mystery until one day I realized that I was the messenger and gave it to Sakyong Mipham for his 40th birthday.

Still the phrase lingered and is without a context until several years ago, preparing for an interview with Karma Senge, Rinpoche, I attempted to print the phrase to ask him, but the printer ran out of ink so I couldn’t show him the paper. In my slightly bad Tibetan I repeated the phrase and asked if he recognized the context. He then asked for the paper in my hand! Then he wrote a short paragraph of explanation. The phrase in English:

“Even if space ceases to exist, the siddhi of mantras will never diminish.”