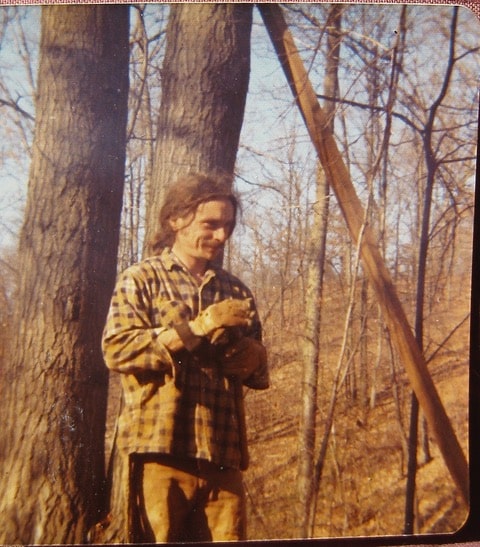 There was never a box invented into which Austin could fit.  His adulthood coincided with the sixties, a time and a movement he seemed to be made for.  His finger was on the pulse, and he rode on the very crest of that counter-culture wave.  Leary, light shows, a proponent of peace, and a social activist.  He was passionate about organic food and with others in Ohio in the early 70s helped create an organic food coop, an organic food restaurant, and a program to feed the poor for free in Appalachia.

There he was again right at the very beginning of Chogyam Trungpa’s arrival in the US.  For the rest of his life, he maintained a practice of sitting meditation.  His inspiration about buddhism swept many people into the dharma.

He was wonderful with dogs and did much pet sitting for many of us.  The pets, one knew, could not be in better hands.  The plants?  Well, errr…

If anyone can steer through the strange psychedelia that describes the bardo, it could well be Austin, who ever loved a good trip.

As an old T-shirt of his read  — “Keep Austin Weird.”  No problem.  “What a long, strange trip it’s been” perhaps best sums up his life.

He will be missed by many.

Photo above: Austin in Athens, Ohio, 1972/3 at Hamsa, an ecumenical community devoted to organic food

Post a tribute to Austin
Please note: New tributes do not appear immediately. Your tribute will be posted soon.

My dear friend. Met at Karme Choling very early. He was the original zafu maker in the business that became Samadhi Cushions. We attended seminary together in 1976. Connected again in Boulder. He came to my wedding and cared for my baby. He was an odd one; lived in my daughter’s play house in our backyard for 3 years! He loved the Huerfano Valley and stayed there many years near some land we owned. He loved the rugged life. When he had his stroke he was living in Crestone. He wasn’t expected to survive but did. Glad that I stayed with him for a few days 3 years ago. I thought it would be the last time. He told me that he felt more Taoist than Buddhist; stopped doing formal Buddhist stuff but continued to sit. An oddball and a lot of fun!

I remember Austin.....he was connected to the Ohio Group who became students of the Vidyadhara - George Ramsey and the Campbells....he had a great laugh....haven't seen him for decades, but remember him with great fondness. Wishing you well on your journey, Austen

Robin Kornman on the The Rain of Wisdom

The Magic of Casa Werma

The Chronicles
By Brus and Jean Westby What is the difference between the "magic" of sleight of hand or a trick of the eye and real magic?...

A Harrowing and Most Amazing Journey

Update on the Fire at Shambhala Mountain Center