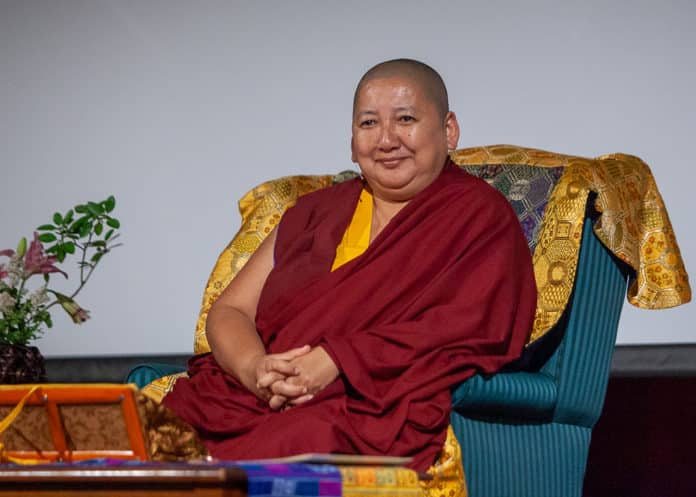 Khandro Rinpoche, one of a long line of eminent female reincarnate teachers of the Nyingma Mindrolling lineage, was in Halifax in early August to teach and to consult with KCCL, the fairly new Kagyu monastic center about half-hour’s drive out of town. It was a visit sponsored by KCCL.

It had been some years since Khandro Rinpoche, her Eminence, was last in Nova Scotia, and her visit created a stir among the Buddhists living here – most, but not all connected with Vajradhatu and Shambhala. The four talks were held in the McGinnis Room, a big auditorium at Dalhousie University. About 250 people attended: middle-aged greyhairs nodding along at the familiar terms, young people and a handful of apparent newcomers, drawn, perhaps, by the lively picture of her on posters plastered around town.

Her topic was lojong, the 59 slogans on training the mind brought to Tibet by the Bengali Buddhist master Atisha in the 11th century. In teaching this, a foundation of the Mahayana, Rinpoche spent a morning on its lineage and lineage stories, and a full session on the five slogans on absolute truth teachings, and how some understanding of that is crucial to understanding the remaining 53 relative truth slogans.

She also talked extensively about KCCL and the need for monastics and monasteries in the West today, as people and places devoted only to preserving, studying, practicing and teaching the dharma. She is, of course, very actively involved in Mindrolling Monastery in India, of hers and her father’s lineage, and also founder of centers and retreats elsewhere in India, Europe and North America. During the lojong teachings, she mentioned KCCL’s plans to move from a suburban house about 30 minutes outside of downtown Halifax into a more spacious house with grounds in or near town, easily accessible to lay community. KCCL has started its property search and is launching a $1 million fundraising campaign for it. It was clearly an effort that Rinpoche enthusiastically supports, and anybody who didn’t know about KCCL at the beginning of the weekend definitely knew about it at the end.

It was a great weekend. We in Halifax do hope she visits us again soon.

The Visit of His Holiness the 17th Gyalwang Karmapa

Orgyen Tobgyal Rinpoche
In fact all the great lamas consider Trungpa Rinpoche as a real vidyadhara. He is very special. He is a very authentic master and great scholar. What he wrote is mind-boggling.