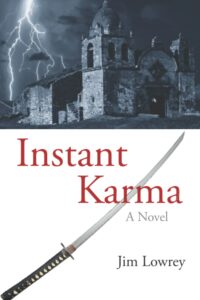 Storytellers are dreamers, trying to peddle an unreal reality in order to develop a better real one – an attempt to move from an exclusive reality to an inclusive society, from ignorance to awakening.

This quote from the Preface to INSTANT KARMA: A Novel, by Jim Lowrey, gives the reader a clue as to the intent of the author in creating this entertaining and informative story of a young man growing up in a small Kingdom whose expressed goal is to create an enlightened society.

In a previous book, the non-fiction, TAMING THE UNTAMEABLE BEINGS, Mr. Lowrey shared his personal experience of being one of the earliest students of the Vidyadhara Chögyam Trungpa Rinpoche. As a member of the infamous Pigmies, a band of hippies who lived for a time in the early 1970s on the land that is now Shambhala Mountain Center, Mr. Lowrey was a unique witness to the wild beginnings of Trungpa Rinpoche’s efforts to bring the Vajrayana Buddhadharma to North America.

While TAMING THE UNTAMEABLE BEINGS looked back on the history of Buddhism in the west, INSTANT KARMA looks ahead to a future that unfolds after the cataclysmic “realignment” during which the three Lords of Materialism are defeated by the combined efforts of the genuine human spiritual traditions. In the wake of massive loss of both life and technology, those remaining are scattered in a variety of cultures and political entities.

The protagonist of INSTANT KARMA, Kiku Masamuni, is born into a wealthy and influential family who live in the small Kingdom of Kokoro, an orderly society based on a deep Buddhist tradition and an appreciation of the military.

As readers, we are invited to follow Kiku from childhood as his life, and that of the Kingdom of Kokoro, as it unfolds over decades. We are witnesses as Kiku is confronted with personal issues of love and loyalty, as well as larger social issues of violence and spiritual intolerance. We watch as he is drawn into a web of political intrigue and insurrection.

All along, we are privy to Kiku’s thoughts and emotions. This is particularly interesting because, having been well trained in contemplative practices from an early age, Kiku is keenly aware of the shifting patterns of thoughts and emotions that make up his inner world.

In the outer world, Kiku’s adventures include dramatic horseback rides through vividly described desert and mountain terrain, along with scenes of potential conflict worthy of a Marvel comic. These outer events combine with the richness of Kiku’s inner experiences of doubt and confusion to make for a both a meaningful and entertaining reading experience.

In the end, the reader is left with much to contemplate about the application of this imaginatively created “unreal reality” to the current “real reality” of chaos, confusion and fixed views that we are living through at many levels. As well, we can appreciate the mind that brought Kiku and the Kingdom of Kokoro into existence, the mind of a long-time contemplative practitioner who seems to be an, at least somewhat, tamed untameable being.

Order INSTANT KARMA In the USA

The Essence of What He Invoked