The Chronicles is on the road — visiting people living in Montreal, New England, and New York who knew the Vidyadhara in the early 1970s. I started in Montreal since that’s where Rinpoche and Lady Diana first lived in North America and where Rinpoche’s first North American teachings took place. As Khandro Rinpoche said when she gave a talk in Montreal a few years ago, “This is where it all started.”

The newly wedded Mr. and Mrs. Mukpo landed in Toronto in the winter of 1970, spent one night in a Toronto hotel, and traveled to Montreal the next day where they spent about three months waiting for their visas to come through. Tail of the Tiger had just been purchased and a few of Rinpoche’s students from Scotland were living there and waiting for Rinpoche’s arrival.

What happened in Montreal during those three months? The trail is a little hard to follow and I’m not finished with the detective work. But here are a few interesting highlights.

According to Phil Heilig, one of the few people around at that time who is still living, Rinpoche and Diana lived in a small and somewhat dark apartment on the second floor of this building; the address is 5151 Cote des Neige. I’ll see if Lady Diana concurs in next few weeks.

Stephanie Pukit was teaching at Dawson College in Montreal in the late 60s and early 70s in a new and experimental department called Mosaic. Mosaic taught a kind of 1960s blend of religion, psychology, literature, and whatever happened to come along. She got a call from someone — we don’t know who yet — saying that there was a Tibetan Lama in town and would Mosaic be interested in inviting him to teach? Mosaic was very much interested and Rinpoche gave three talks — perhaps his first talks in North America — to a small gathering of Mosaic students and faculty. Because there was no space available at Dawson, the talks were given in Stephanie’s apartment on Souvenir Street. And because it was the largest room in the apartment, the talks were given in Stephanie’s bedroom. Unfortunately we don’t know the address of the house on Souvenir. It’s a short street (just two blocks long) in the heart of the city lined with stately stone townhouses like the ones below. 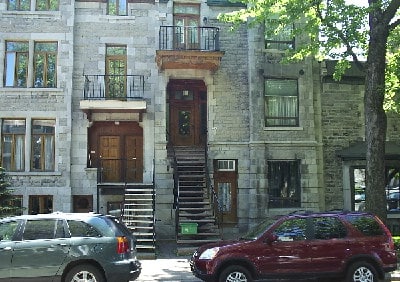 Sorry to be so brief. There is actually quite a lot to tell but I have to get back on the road. Today I’m visiting David Wilde at his home near Karme Chöling, a long time sangha member and a student of Rinpoche’s in Scotland and the early days of Tail. I’ll post more as I have time.

In appreciation of Thrangu Rinpoche