I was contemplating anecdotes of my personal experiences with the Vidyadhara, most being in the context of serving him as a kusung, and I realized that what I most would like to share at this time are two things I have learned about devotion to him as my root guru.

The first is from an experience I had with Ven. Thrangu Rinpoche at the beginning of the three year retreat in 1990. The retreat begins with three months of guru yoga practice, with sadhanas for Marpa, Milarepa and Gampopa. In true Kagyu fashion, we students are admonished to shed tears of devotion etc. to these lineage masters. Not quite feeling that way, I went to Thrangu Rinpoche with a kind of complaint. I told him that I had complete heartfelt devotion to my teacher, the Vidyadhara, but I didn’t see how I could genuinely feel that way for these gentlemen whom I had never met. In reply, he chastised me gently, and in a way I understood to be applicable to many of us senior students. To paraphrase, he said that our concept of the Vidyadhara—and our devotion to him—were much too small. We need to understand that the Vidyadhara is the same as the Buddha, who is the same as Naropa, Marpa, Milarepa, Gampopa etc. We often become too fixated on him in his ordinary form as a marvelous and eccentric Tibetan teacher, and we also think that everything he did and taught was specifically for us, his fortunate western students. All of that is fine as a starting point, but we have to go beyond that. That feeling of our having a special and exclusive connection is exactly the mark of a mahasiddha—that’s what mahasiddhas do. 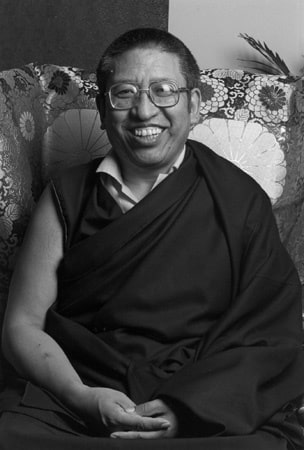 That teaching from Thrangu Rinpoche has never left me. It challenges us to recognize the difference between a kind of limited chauvinistic devotion, which is very personal and circumstantial, and a much deeper devotion, which is big, lonely and limitless.

My other thought about devotion to the Vidyadhara has to do with Sakyong Mipham Rinpoche. In a talk to the acharyas, the Sakyong explained that he saw the progression of sakyongs as having a particular pattern, which I understand to be consistent with Lao Tsu’s description of the progression of emperors. The sakyongs/emperors appear in pairs, with one being the “instigator” and the next being the “completer,” and so on. That seems to me to apply accurately to the Druk Sakyong and Sakyong Mipham (with interesting implications for what may follow!) My thought about devotion here is a very simple and personal one: I experience my devotion to the Vidyadhara as being utterly and completely inseparable from devotion to the Sakyong. I have no doubt that supporting and following Sakyong Mipham Rinpoche is my root guru’s wish and command.

Richard John, a student of the Vidyadhara since 1975, served as a kusung, resident director of Shambhala Training, and center director in Halifax. Richard was also among the first group of people to complete the three-year retreat at Gampo Abbey.

Training the Mind: The Four Foundations of Mindfulness