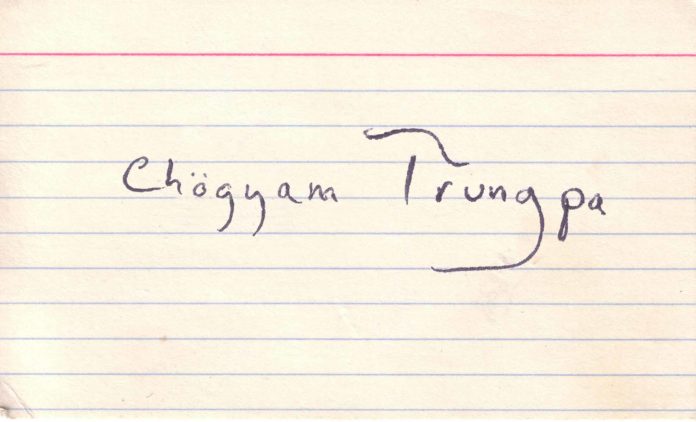 My stories of the Vidyadhara are pretty uneventful. As a kasung, as personal guard, I got to be around him many times, and I lived in the Court in Boulder, in a room in the basement, and took care of his sons Gesar and Ashoka for six months in 1985, just before the move to Halifax. Yumi & I & especially Doug Webb held the fort after that. I saw the Vidyadhara a lot just before the move, but I think we actually talked only a few times over all the time I knew him. Once at the 1984 Seminary in Bedford Springs in an elevator I thought he knew me by then but he asked me what my name was. “Pinson, Sir,” I said. “Pencil?” He asked. “Yes, Pencil, Sir,” I said. He laughed and it felt good to make the guru laugh. And that was that exchange. The elevator door opened and I wheeled his wheelchair out into the hall. I think we were headed to a talk. Most of my exchanges with the Vidyadhara were very simple & no big deal.

Nonetheless, he used to terrify me. My hands would sweat, my heart pound, often I would’ve been determined to ask some question or other before my shift or a talk, or before seeing him, but, in the moment of asking, my brain would abandon me. “If you want to talk to him, that’s fine, but we’ll have nothing to do with it.” In the heat of the moment, I’d be there without the ability to think, or often even to clearly remember my question. It seemed then to be talking just for talking’s sake. “But this is the Buddha,” I’d tell myself, “Say something, anything make a connection. This is an opportunity not to be missed!” But I usually ended up saying nothing.

He was never mean to me, or harsh, and, although I’ve heard stories of “black air” and rough treatment, I never saw any of that. His presence just terrified me. When I was living in the Court in Boulder, entering a back door to the basement as I did, I could always tell if he was in the house or not. Or going into Karme Dzong [Boulder Shambhala Center], I could tell if he was there, aside from any event. This wasn’t great ESP on my part, many people could tell right away. The Vidyadhara had an extraordinary presence.

During the 1984 Seminary, I was invited to a small gathering a birthday party for a couple of the participants.* Rinpoche was there, so this was one of the few times I was around him not as kasung. Although I went in uniform, I wasn’t on duty.

After dinner and cake, we played the Qualities Game, which if you don’t know, is a game where something is written on a card, often a notable person, but it could be almost anything, and the Vidyadhara was the only one who knew what that something or someone was. Everyone else would take turns asking questions like, “Sir, if the subject of this game were a kind of car, what kind of car would it be?” or, “If the subject of this game were a kind of plant, what plant would it be?”, etc. And the Vidyadhara would answer, say, “A Volkswagen” or “A yellow rose”, whatever, and everyone would try to guess the subject of the game from the qualities, the sense of the thing, from the answers the Vidyadhara had given. For example, if the subject were Winston Churchill, and if asked what kind of dog, perhaps a bull dog would be a good answer. It’s a pretty good game, but it depends on having someone who is a bit of a poet doing the answering.

This particular evening, Chögyam Trungpa Rinpoche himself was the subject of the game. I don’t know who made that choice, although I saw his name on the card and thought it was not written in his handwriting. The game went on for awhile and at one point the Vidyadhara left with his guard on his arm to go to the bathroom. While he was gone, John Weber got up and said, “Well, I guess it’s pretty clear to everyone that the Vidyadhara himself is the subject of the game, so this becomes a perfect opportunity to ask him questions about himself.” Well, this hadn’t been obvious to me, but, having it pointed out, it did seem clear enough, and an especially good opportunity to ask questions. So that’s what we did when the Vidyadhara returned, and later I wrote down some of the questions and the Vidyadhara’s answers. Here’s what I remembered:

If a type of alcohol, the Vidyadhara answered, “Tequila Sousa.”

If a flavor, the Vidyadhara said, “Jalepeno.”

If a haiku, he said:

If a flower arrangement, he said, “A pine branch and a crysanthemum.”

If a part of sex I thought he would say orgasm, but he said, “Foreplay.”

A note from Dominique Le Grand (who was also there that evening): I remember vividly asking: “If this person were a sexual activity, which would it be?”….to which he replied, after taking his time….”Foreplay.”

If a kind of heartbreak, he said, “Loneliness.”

A place to go on vacation, he said, “Disneyland.”

Where to go for a good time on the town, he said, “Get a haircut.”

I’d been silent up to this point, as usual, much impressed with both the questions and the answers, and I was thinking desperately of a “good” question to ask.

One person asked if the subject were a person in this room, who would they be? The Vidyadhara said, “Suzann Duquette.”

Another person asked if the subject were a lineage figure, who would it be? The Vidyadhara said, “Marpa.”

The Vidyadhara leaned forward toward me on the table. He was seated two people away from me, about three feet across the table. He leveled his bloodshot eyes above his glasses at me.

“It ceases to be a game,” he enunciated in his high voice.

I felt nailed by his eyes. He just stared at me. I wanted to climb under the table but I couldn’t look away. There seemed an awful long silence.

Then at some point, locked in eye contact with the Vidyadhara, I realized he didn’t exist in this body before me like I was thinking. He seemed to be all around the room, more in the space itself than just in this body of his. I was being overly concerned about just the body. It wasn’t like any big revelation or anything just a clear certain thought. Then I felt I’d done something wrong, committed some grave social error. Nobody was saying anything. I have no idea what others were thinking.

“Sir,” I said, trying to redeem myself, “If the subject of this game were a wealthy man, what kind of gift could you give him?”

“Disneyland knowledges?” I asked because I couldn’t imagine a fully enlightened person wouldn’t know all the important things. What knowledges could possibly be important to give?

*This event was a birthday dinner for Cathrin Hayward-Ziegler, 28 January 1984.