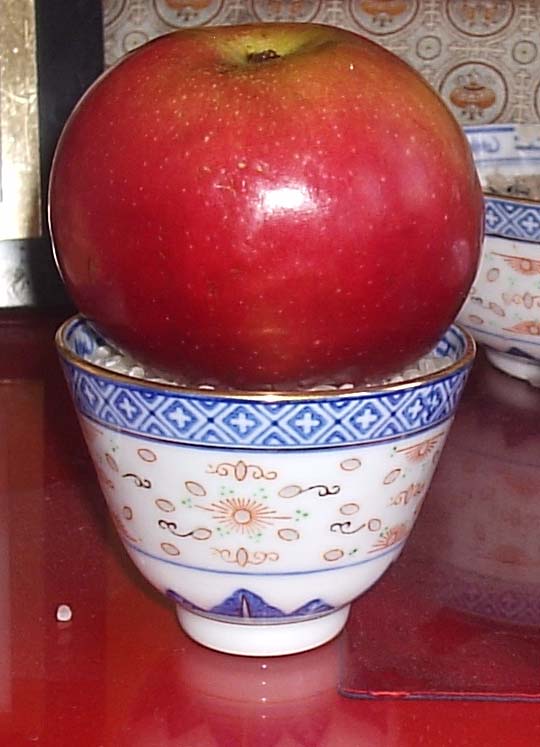 This story takes place at Karme Choling meditation center in Vermont around 1982. There were two of us working in the graphic design department. I was the assistant. We collaborated most successfully with environments. The topmost room in the main building was then, and still is, used as the Shambhala Shrine room. Chögyam Trungpa, Rinpoche, our teacher, was coming to visit and we were determined to turn the room into a Tenno Room.*

Given Rinpoche’s example, as he was a world-class flower arranger in the style of the Sogetsu School, we wanted to recreate one of those huge flower arrangements he was so skilled in doing with large pine tree boughs and spider chrysanthemums. It took a good deal of exertion and several staff members to make a large black lacquered looking box as the base, and to create extra-large and strong frogs, or kenzan, to hold the big branches of pine found by the explorers of the phenomenal world. The arrangement was placed directly to the right of the entrance door. A woman flower-arranging student from Montreal created the actual arrangement.

We didn’t have real tatami mats in this Vermont outpost so I had to create a fake handcrafted version. By purchasing some woven floor mats, like the ones you use for the beach, and padding some boards with cotton batting for the base, a reasonable facsimile was put together. It then got sewn together, painstakingly, with a large, sharp, curved rug needle, adding brocade strips on the sides. The mats were placed vertically in front of the Shambhala shrine. The shrine itself was directly in line with the entrance door on the far wall. We kept moving the mats around to decide if they should be horizontal or vertical. The shrine was also carefully designed with elegant offerings, though I no longer remember the details. There was a formal cornice of elaborate Japanese brocade at the top. And a clean, crisp vertical Shambhala banner on the wall.

On the left wall of this attic room (stage right), with very slanted eaves or angled walls, were the Buddhist shrine and offerings. Hanging from the ceiling were Japanese black-trimmed lanterns that had little legs, which made one think they should really be sitting on the floor and not dangling from the ceiling.

When Rinpoche arrived, we all paraded him around the room apparently showing him what we had prepared just for him. He didn’t comment or say anything. But when he got in front of the Buddhist shrine, he slowly and carefully picked up the apple that had been used as the food offering and turned it upside down. It had been placed in the manner one usually thinks of apples and all fruits – with its stem pointing up. He placed it back into the rice-filled offering bowl stem down, bottom up. I recall someone asking, “Why did you do that, sir?” And Rinpoche saying, something to the effect that, the part that connects to the earth should be pointing downward’. (That may even be exactly what he said.)

When I heard that and it registered, as it was in the midst of the general atmosphere of detail and care of teacher to student and student to teacher, I remember thinking, “the rest of my life I’m going to be telling the story of how the apple stem should be placed downward on a shrine to connect with the earth energy.”

I’ve told this several times at different Dharma Centers; however, the next day the apple stem has always pointed upward again. When you think about it and visualize how fruit grows it makes complete sense: the stem to the branch, to the trunk, to the roots, to the earth.

That was the only adjustment or comment he made in the room. The huge pine branch managed to stay put for the length of his visit.

And now you can tell the story.

*Tenno Room. A Tenno Room is a formal audience hall in the Japanese tradition. Starting in the early 1980s, CTR would sometimes conduct formal meetings and ceremonies in a Tenno Room environment at Seminaries, Assemblies, and at the Kalapa Court.

Editors Note: Quite often, if Rinpoche noticed an apple or other fruit being offered with its stem up, he would turn it over. At one point, he said that if the stem is up, the offering is disconnected from the rest of the shrine.