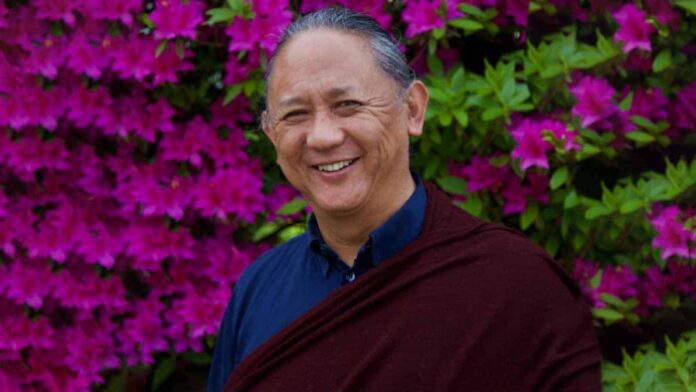 I would like to tell you a story. Once upon a time there was a village, and in that village there were many bright and intelligent kids who were excited and curious about their lives and the world. One day, they heard there was a garuda in another village, and that this garuda could teach them how to fly! For some reason, he was not in his own Garuda Land, but in their land.

The kids went to meet the garuda, and right away they found him to be impressive and inspiring.

They became attracted to everything about him: how he spoke, how he sat, how he moved, and how he flew. So one day they asked him to teach them how to fly. “Very well,” he said. “It is a long journey to learn how to fly. But you can learn, and I will teach you.”

The garuda began teaching these bright, open, curious, excited kids. He taught them how to view themselves and the world, and how to connect with his teachings. He taught them how to take off from the earth, and how to go higher and higher. As they practiced, they became more and more confident and graceful in their flight. They could dance in the sky and see the wonders of the world below—flying above the world while not being of the world. It was the highlight of their lives.

But the truth was, all their confidence depended on the presence of the garuda, who always flew with them and held a string attached to each kid. He had taught them in detail all the steps to be able to fly, but the kids had never examined whether they could fly on their own. At the time, however, it didn’t seem to matter.

Then one day the garuda had to return to his own land, and there was nothing the kids could do about it. When he left, everything changed. The beautiful ride with the garuda was over. Without the garuda’s manifestation—without his power, will, confidence, and presence—the kids gradually lost their ability to fly. Even though the garuda had taught them every step, they had never flown by themselves. They had always followed him, and without him they lacked the confidence and insight needed to lift themselves up. Now the grief-stricken kids were nowhere but where they had started, painfully stuck on the ground with only the memory of flying. They felt lost without the garuda, and a sense of chaos arose among them.

But eventually, the kids realized the garuda had left them with everything they needed. He had methodically taught them how to fly, from step A to step Z. Now they could go back to the beginning and teach themselves again how to fly, without any external help. This time, they could do it on their own. The garuda had left them all the knowledge, all the guidance, all the pith instructions, to be able to fly on their own. Now it was just a matter of reviewing and applying all he had taught them and developing independent confidence. This independent confidence is all that counts.

The Chronicles
Dispatches with Julia Sagebien

The Chronicles
Susan talks about meeting Trungpa Rinpoche, working as a metaphysical consultant, and teaching at Naropa, the feminine principle, and her experience of Trungpa Rinpoche's samadhi.

A Conversation with Chris Pleim