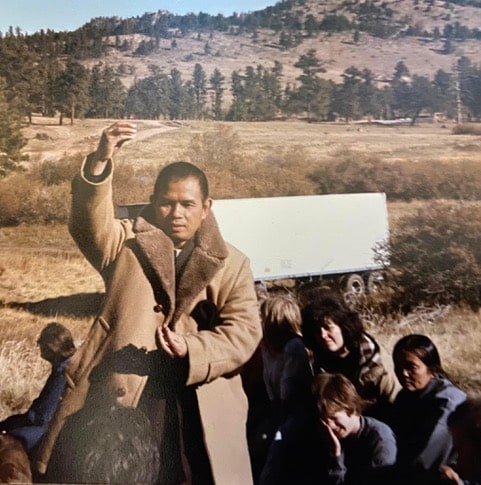 Tom Bell and Thich Nhat Han had worked together during the anti-war days when Tom worked with the American Friends Service Committee. He was the first Buddhist Tom had met. So, when Thay came to Colorado on his way to do a program at RMDC, he stayed with us. I remember a few things about that visit. One is that he offered to do the dishes one evening, saying that he liked to imagine washing the baby Buddha. We, of course, gave him our room to sleep in, and he was rather taken back by having to sleep in a king-sized bed; this was not part of his regular monk regime. I also remember him being impressed by the lay-out of our chants, particularly the Heart Sutra. One of Victoria’s memories (she was probably five or six at the time) is that he had us bow three times before we started eating. That stuck with her because of the space it allowed before starting to eat.

Thay was great with children. At RMDC when the participants would gather for a talk, he would have any children who were there with their parents come and sit in front of him. He would speak to them first before they were dismissed and he would give a talk to the adults. The children went along with the outside walking mediations he led. What we all remember about that is the s l o w walking; this was not a leisurely stroll. He also had everyone participate in tea practice. We all sat in a circle and tea and cookies were passed on trays. There was bowing from one person to the next before taking from the tray; then the person who had just taken their cup or cookie, would bow, take the tray, and hold it for the next person and the ritual would continue.

His legacy continued when I started a children’s Sunday school in Boulder, All the children, no matter their age, would begin by joining together in tea practice. Children generally love ritual, and this was a big part of their morning.

Another memory I have of Thay is a talk he gave at Naropa. He came to Boulder several times, and I don’t remember which trip it was, but I have never forgotten his talk. It was at the time when many South Vietnamese were trying to flee their country by sea. They were referred to as the “boat people.” He talked about their plight, and recited a poem he had composed called, “Please Call Me by My True Name.” It’s a very powerful piece of work!

Another teaching he gave was to hold up a piece of paper and ask the audience, “what do you see when you see this paper?” He would go on to say that he sees the woodsman who cut down the tree the paper was made from. He would see the woodsman’s wife who baked him the bread he ate before going to work. He would see the farmer who grew the wheat to make the bread. And on, and on. It was a very powerful teaching on the interconnectedness of us all.

Bodhicitta, Aspiration, and Merit: an address to the translators

Reggie Ray
Supplication to Chogyam Trungpa to Remain Lord and master, Friend of our hearts' desire, We call upon you to be near. In the nirmanakaya, you appeared in our...

The Essence of What He Invoked