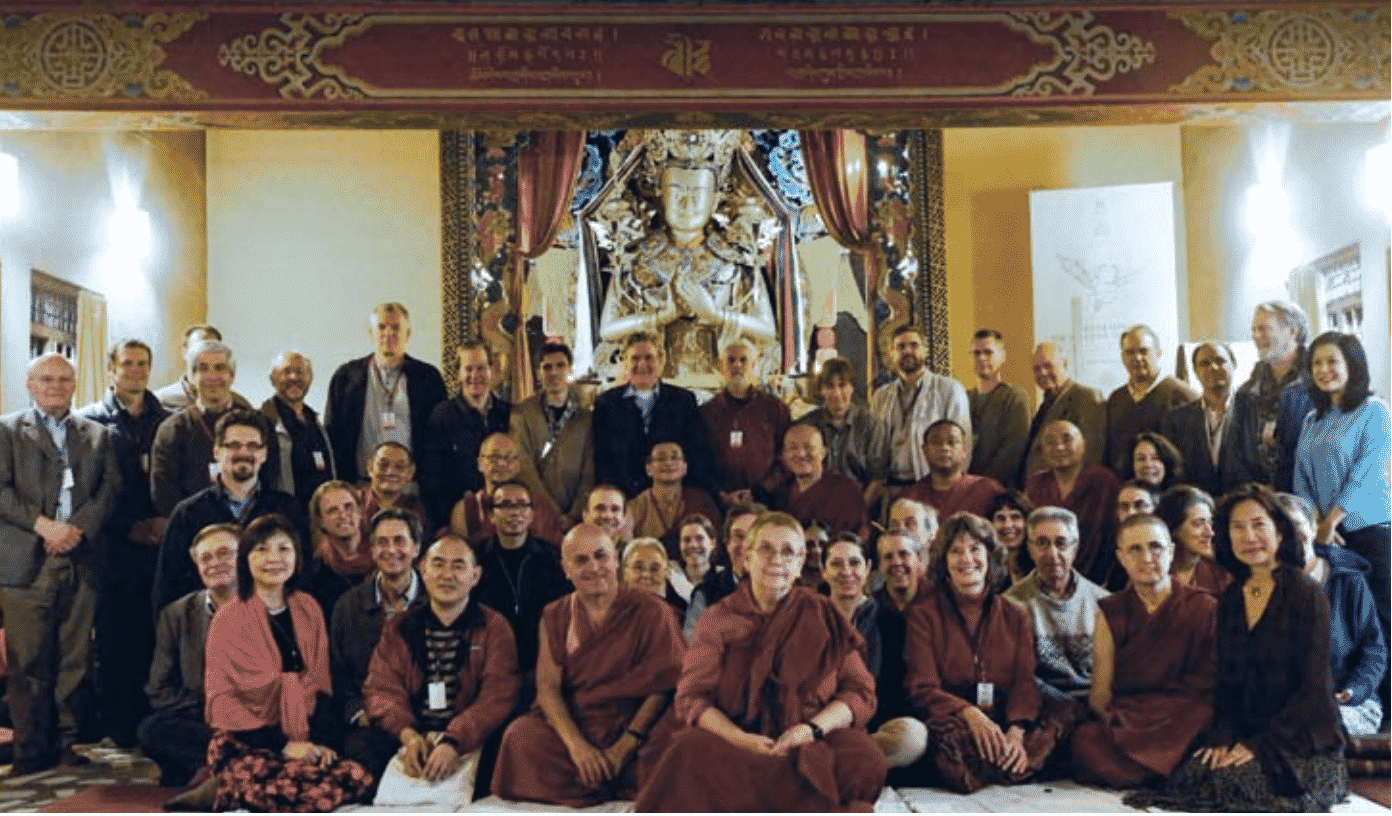 The Conference Gets Underway in Bir

The world’s leading Dharma translators are gathering at Deer Park Institute in Bir, India for a conference convened by Khyentse Rinpoche and chaired by the Dzogchen Ponlop Rinpoche. Khyentse Rinpoche talks about the conference with a sense of urgency, stating that the future of the Buddhadharma could depend on the collective efforts of Dharma translators “working together … and coming up with a plan.”

Regarding the conference, Khyentse Rinpoche states: “My main reason for convening this conference is that I believe it’s entirely possible that the survival of the Buddhadharma could depend on it being translated into other languages. I also believe that by translating and making available the Tibetan Buddhist texts to modern people, a vast swathe of Buddhist civilization and culture may be saved from global annihilation. It’s clear we need to act quickly, and I believe the only way we can accomplish this monumental endeavor is by working together—pooling our skills, resources, experience and energy and coming up with a plan for translating the Buddhadharma. We must decide where we want this process to be in 10 years, 25 years, 50 years and 100 years.”

According to the conference chair, the Dzogchen Ponlop Rinpoche, ” … we cannot have a goal to make Tibetan Buddhism a Western institution. For the Buddha’s teachings to truly thrive in our cultures and take root in our hearts, we must have a genuine Western Buddhism. For this genuine tradition to flourish and become fully integrated in the West, we must, in my view, have the words of the Buddha in English. A comprehensive English compilation of the Buddha’s words will serve as an authoritative bedrock for a living tradition.”

Also attending are luminaries such as Gene Smith, Matthieu Ricard, Robert Thurman, and top translators from all four Tibetan Buddhist lineages, representatives from the major Tibetan-English translation houses around the world, and a number of publishers and patrons. The Nalanda Translation Committee, founded by Chögyam Trungpa in the mid-1970s, is represented by Larry Mermelstein and Scott Wellenbach.

The agenda for the conference includes a proposal to initate the full translation of the entire Buddhist canon starting with the 108-volume Kangyur, the Buddha’s direct teachings, including many sutras and texts never before translated into English. This project, and others to be discussed during the conference, will require unprecedented collaboration among translators and the support of the Tibetan Buddhist community.

While on their way to Bir, some of the leading translators spoke at the India International Centre in New Delhi, on Friday, March 13th, highlighting the key role of translation “in bringing Buddhism into the intellectual mainstream of modern society,” as well as India’s formative role in Buddhist history and as the birthplace of the Buddha’s teachings. 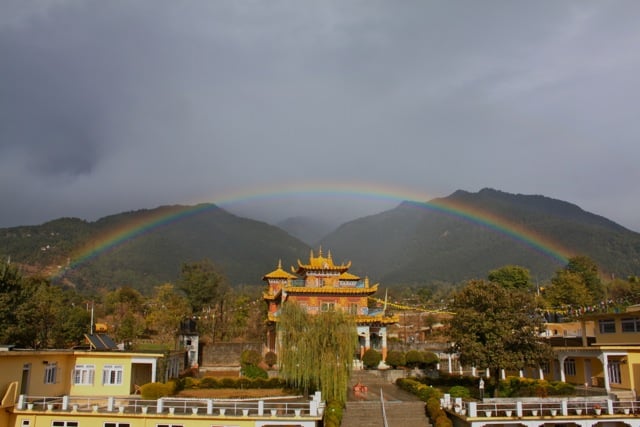 Warning of “how urgent and precarious” the survival of Buddhist culture and civilization has become, Khyentse Rinpoche today urged the world’s top translators to join together to rescue the Buddhist teachings “from premature extinction.”

“The survival of Tibetan Buddhism could depend on its translation into other languages,” Dzongsar Khyentse Rinpoche told 50 leading translators in Bir, northern India. He reminded them that “the Buddhist heritage and culture that permeated Tibetan life for more than a thousand years has all but disappeared in India, its country of origin” and only survived by its translation into Tibetan.

Khyentse Rinpoche said that when we look at the current situation, it’s clear that the same kind of virtual obliteration of Buddhist culture could quite easily happen again.”

“By translating the Tibetan Buddhist texts into modern languages, you may well be saving a vast swathe of Buddhist civilization and culture from global annihilation. The living traditions of Dharma that still exist todayfor example, in Japan, China, Thailand and Burmahave only survived because they had the foresight to translate the original sacred Buddhist texts into their own languages.”

Rinpoche had invited the leading Tibetan-English translators from all four Tibetan Buddhist lineages and major translation houses worldwide to come to Bir to plan for the future and “write the agenda for an ongoing translation conference that never closes because all the attendees continue to consult and work together in pursuit of a common goal.”

Part of that goal, he told the translators in the opening session of the gathering, is to translate into English the entire Buddhist canon, including the 108-volume Kangyur-the direct teachings of the Buddha. Such “a massive and extremely daunting task,” he said, will require an “immense translation effort that can only be accomplished if we all join forces.” It was precisely to promote such “ongoing dialogue and spirit of cooperation and mutual support amongst translators” that he had invited them to Bir, he said.

The unprecedented gathering—sponsored by Khyentse Foundation and hosted by Deer Park Institute—is being chaired by Ponlop Rinpoche, who tomorrow will deliver a keynote address on translating the Kangyur. By Friday of this week, the translators aim to identify a 25-year and 100-year vision for translation of sacred Buddhist texts and to initiate concrete short-term actions aimed at realizing those goals.

In what is being hailed as a landmark event in Buddhist history, 50 of the world’s top translators and six incarnate lamas today pledged to translate all the Buddha’s words into English within a generation. That, says Dzongsar Khyentse Rinpoche, who convened the gathering, may well preserve Buddhism from “global annihilation”.

Meeting in the tiny village of Bir in northern India, leading Tibetan Buddhist teachers and representatives from major translation groups this week hammered out a 100-year vision to translate and make universally accessible the entire Buddhist literary heritage. They also produced concrete five and 25-year plans to accomplish what they agree is a monumental collaborative task. On Saturday, the translators presented these plans to the Dalai Lama in Dharamsala.

Already, enthusiastic expressions of support have been received from all parts of the world, with more than 11,000 signing a letter of appreciation to the translators. They wrote: “Without you, we couldn’t practice or study the Dharma, so we are hugely grateful for your incredible gift to us! May your current deliberations in Bir, India, bring the Buddha’s words and teachings to countless beings.”

Among the specific pledges made today in Bir are the following:

Khyentse Foundation, which hosted the gathering, will support the initial planning of the massive project, and Khyentse Rinpoche agreed to act as its interim leader – at the urging of the assembled translators and lamas. The translators also made plans to train more qualified translators, improve their tools and resources, and strengthen collaboration between western translators and Tibetan lamas and teachers.

“What we are doing here is really serving mankind and the world at large,” Dzigar Kongtrul Rinpoche told the assembled translators. Orgyen Tobgyal Rinpoche called the Kangyur, which the translators aspire to translate within 25 years, “the most precious of all the scriptures” because they are accepted by all Buddhist schools. And Dzogchen Ponlop Rinpoche noted that translating the Kangyur “is crucial to establishing a genuine lineage of western Buddhism.”

Jigme Khyentse Rinpoche reminded the translators that what they are really translating is the Buddha’s wisdom, realisation, and compassion, and that the biggest obscurations to good translation are ignorance and pride. Emphasizing that the words of the Buddha are a “heritage of mankind” that can “bring peace and harmony to the world,” Pema Wangyal Rinpoche urged their translation into French, Spanish, Arabic, and many other languages after English.

Renowned translators Matthieu Ricard and Robert Thurman called for scholarly translation to be joined with genuine understanding, wisdom and compassion based on meditation and with respect for teachers and their profound knowledge. Ricard also emphasised the importance of writing in beautiful, literary English.

Glimpses of Chogyam Trungpa Rinpoche’s Life and Legacy in Tibet

From BORN IN TIBET to FROM LION’S JAWS

I Trust My Students

The Padmasambhava of Our Time