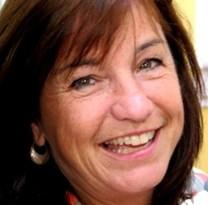 As I bring my mind to think of our dear friend Nan Newhall it comes to rest on a vivid but simple memory. It was only two summers ago when Susanna and I were staying with Nan and Geoff at their much loved farm just next door to Dorje Denma Ling. Nan had already been diagnosed with stage 4 lung cancer but was still in remarkably good shape. She was amidst her energetic and determined campaign to ally with every natural and health-giving pathway she could discover. Her health was still good enough that she was still able to do most of her favorite things, in this case deep in the dirt of her vegetable garden. I sat next to her resplendent in soil smudged face and garden overalls, on the wooden garden frame having an ordinary catch-up chat. I don’t remember precisely what we talked about but I clearly recall two things. First her eyes  if eyes could listen  those would be Nan’s. In all the years I knew her (more than 35) as first acquaintance then friend, no one would focus attention on me (and everyone else in turn) as intensely, empathically and with absolute genuine interest as Nan. And secondly her smiling laughter  quick, deep-rooted and absolutely full of joy in the simple events that opened up that remarkable wide and tooth-full smile. I know we would have talked among other things about how she was feeling and dealing with her illness but probably also about her veggies, her blueberry crop, whether the lawn needed mowing, our kids and maybe about things going on in and round the farm and Denma Ling. And no doubt she would have been acting more interested in what was going on with me than wanting to talk about herself.

Nan was real. In the early years when we were both in Boulder during the so-called hey-day of the Vidyadhara’s unfolding world, I didn’t know Nan that well but I knew I liked her. She worked for years in our Vajradhatu administration  practice and study I think  or whatever we called it then. What I liked about Nan was she was ‘over herself’, one of the relatively few folks who were much more genuinely interested in how you were doing than how she was doing. Same thing  listening eyes, smiling laugh and open heart. It was natural and heartening that she was in the mandala center, eventually becoming chief of staff. Whatever loyalty means  which certainly has as much to do with critical but not dismissive honesty or judgment, Nan had that quality  with the Vidyadhara of course but also with the Vajra Regent and in recent decades with Sakyong Mipham and also with her friends. She was just someone I liked to be around. When our lives brought us to Nova Scotia and so much changed, the path of our friendship grew, in my case because I was on the fringe male side of a powerful clan of formidable sangha women. I’ll let those friends speak for themselves. I’m just glad I got invited to the partner opportunities which strengthened bonds both with the feminine core but also with the rag tag bunch of guys who got to come along. A number of us also evolved together to become a little Scorpion Seal support group. We started doing the retreats together in various combinations and Nan and Geoff soon became our queen bee and her chief retainer-swami. I know we were supposed to be in silent retreats but oops, those after practice evenings were about as jolly as practitioners can get. And through it all  listening eyes, smiling laughter and open heart.

There were so many interesting and brilliant aspects to Nan. I’ll name some but not describe in hopes that others who were more connected with these specific facets might chime in  business woman (the founder/owner of Clay Cafe), golfer and golf gang convener, mom of moms, wife of wives, the sister side of the Mike-Nan Zen-Tibeto symbiosis, cheerful Marianne mom caregiving daughter, world and especially safari adventurer, artist-painter, Lingdro dancer, natural allergy tester, gardener magician, organic blueberry marketeer, natural foods and wholesome chef and commentator, Kalapa Court container holder, administrative wizard, and connoisseur-participant-commentator on everything fun to do from movies, dinners, book reviewing to expeditions.

Nan was to my way of thinking the best of basic goodness with a double scoop of straight shooter and a twist of stubborn. And she was an exceptional friend. I know this because although we were pretty close longtime friends I experienced the true depth of Nan’s friendship by witnessing her deep relationship with Susanna and in Nan’s obvious love and all-encompassing partnership with her dear Geoff. She was a big piece in the unusual alchemy that can only occur when unusually straight-shooting, honest, caring people get entirely inside each other’s heads and hearts. Nan was entirely inside mine and those of a large gang of people who have the extraordinary and precious ability to say they have been her friends in this life.

Please send tributes, recollections, and photos of Nan to ]]>

The Chronicles
At the Halifax Shambhala Centre, 20 December 2018

The Chronicles
Some 150 people gathered on Monday, October 5 to commemorate the life and teachings of Dilgo Khyentse Rinpoche. Here is the video recording of...

Touch and Go Premieres in Halifax

What if they Gave a Party and Everyone Came?