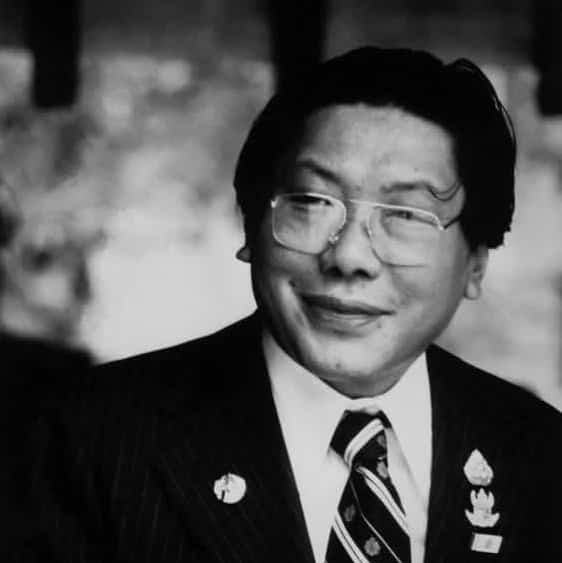 Karme Choling, 1978. We were all excited that Rinpoche was coming to give a teaching program. I was 22 years old. I’d been on the staff at KCL for a year and had just joined the Kasung. Rinpoche stayed at a house close to the center that was later named Bhumi Pali Bhavan, and a Kasung would drive him back and forth when he gave teachings. My job, my introductory assignment was to be the pre-guard, the one who waited at his house for Rinpoche to arrive. I left the teachings early to go over and wait for him. My job was simple: I was to greet him at his car and escort him to the door, a distance of about 100 feet. That was my assignment. I was very nervous about that because I was very young, this was my first Kasung shift and I felt such a powerful connection to Rinpoche. He seemed larger-than-life. Actually I was terrified.

I had been given training for my assignment. I was told by my superiors that Rinpoche was partially paralyzed on one side of his body from a car accident and had trouble walking. One leg was basically stiff. When he walked someone had to hold him up. They told us to be really careful. My officers explained, “You can’t be timid. You have to brace yourself, reach into the car, grab him under the arm and pull him out. You have to hold him up. He will lean on you and if you don’t hold him up he will fall. The guru will hurt his head and it will be your fault.” So, of course this made me even more nervous and intimidated.

I drove over to the house and waited for Rinpoche to arrive. It was late December in Vermont and on that particular night there was a blizzard. It was very windy and the walk from the driveway to the house had become covered with snow and ice. I kept sweeping the snow off while waiting for Rinpoche and his entourage to arrive, and all the while I was getting more and more uptight and nervous. It seemed that I was waiting forever—waiting, waiting, waiting, being nervous. Finally, the lights appeared in the distance; then it all happened very quickly.

The car drove up and I opened the door to help Rinpoche out. In strict accordance with my training, I braced myself with one hand on the roof of the car and reached in with the other, grabbed Rinpoche under the armpit and pulled him out. I did that just like I was taught, but somehow I managed to pull Rinpoche out of the car right onto my foot! There he was nose-to-nose with me, standing on my foot with his beaming full-moon face, staring at me. It seemed he weighed a ton and although I tried I couldn’t get him to budge at all. He just stood there looking at me and then a giant smile broke across his face and he said, “We can run!”

To my horror he took off running down the icy path toward the house. I was running along trying to hold him up but I felt like I was flying behind him like a kite. My training went out the window and I couldn’t think. His one stiff leg was sliding back and forth on the ice as he ran. We got to the house and I was totally blown away. He just stood there, looking at me. By then everyone else from the car caught up with us after our run. We just looked at each other and then Rinpoche started to laugh. Everyone burst into laughter. Rinpoche was so sweet and his laughter so contagious. Although he didn’t say a word, through his laughter he seemed to say: this is our world, welcome to our world. Our world is huge! I felt totally included after being this completely stiff, uptight kid—I was more frozen than the icy walk. Somehow in that situation Rinpoche melted me—and then he went inside.