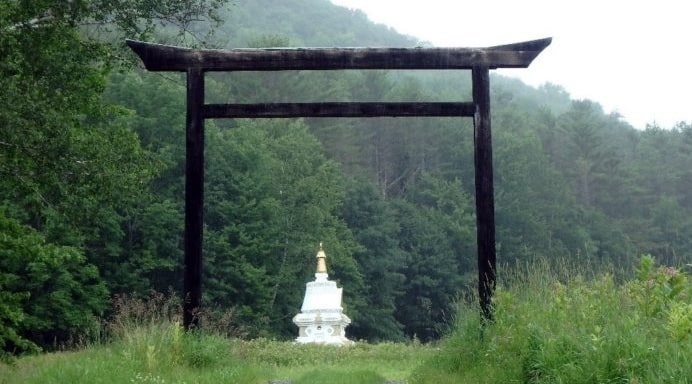 The teachings and practices held within the Vajradhatu and Shambhala sanghas grew from the extraordinary dharma activity of the Druk Sakyong, the Vidyadhara Chögyam Trungpa Rinpoche. As he often emphasized, his teaching and activity was not his personal invention, but the legacy of over 1,200 years of realized masters in Tibet along with 1,300 years in India before that.

Our community and its practice centers grew because of this activity, along with the dedication of several thousand highly inspired and committed student-practitioners, and later through the efforts of Sakyong Mipham Rinpoche and his students. It has been further supported by the active participation of eminent masters of the Kagyu and Nyingma traditions, in particular the sixteenth Karmapa and his Regents, His Holiness Dilgo Khyentse Rinpoche, Thrangu Rinpoche, Tenga Rinpoche, and Khenpo Tsultrim Gyamtso Rinpoche, among others. Because these masters recognized the groundbreaking work of the Vidyadhara, they poured the mainstream Kagyu transmission into our sangha over almost three decades, until the mid-2000s.

Due to the untimely passing of both the Vidyadhara and then the Vajra Regent, Sakyong Mipham Rinpoche took leadership of the community along with its Buddhist and Shambhala streams in 1990, and assumed responsibility for carrying them on. He did so with great dedication and exertion, working with both new and old students.

Through all these efforts, the inheritors of the Vidyadhara’s life’s work have a wealth of dharma resources.

At present, there is a danger that the momentum and continuation of these teachings may be lost.  Therefore, under the auspices of the Druk Sakyong Wangmo, Lady Diana Mukpo, following her intention to open up his teaching streams with the collaboration of longtime and newer students, we intend to offer support to practitioners, both within and outside the current Shambhala centers and organization.

Here we would like to describe our view on training in the three-yana progression of the Kagyu and Nyingma traditions. In keeping with the Vidyadhara’s presentation of those traditions, we recommend that people study the Shambhala teachings in parallel with the buddhadharma, but that is not the focus here.

We hope to help build a network of resources and like-minded dharma practitioners, and to make available various suggested course materials and retreat guidelines. At the same time, we are concerned that initiatives going forward are well grounded in their spiritual integrity. To this end we expect to call on the resources of our many senior practitioners, and to restore our relationships with the Kagyu and Nyingma lineage holders. We anticipate that practitioners who choose to move deeper into vajrayana practice may naturally develop a variety of connections with different masters. There is no conflict in that decision co-existing with continued study of and dedication to the Shambhala teachings.

In the digital age many resources are available, including live as well as recorded teachings. Shambhala Online holds ten years of recordings on Buddhist and Shambhala themes, for example. There are also other digital resources such as the Chronicles of Chögyam Trungpa Rinpoche & Ocean, which hold a vast catalogue of talks and essays, as well as videos of Khenpo Tsültrim Gyamtso’s teachings hosted by the Marpa Foundation, just to mention a few.

We are committed to continuing the practice and study of these lineage teachings as per the Vidyadhara’s example. In the history of our sangha, vajrayana transmission was given by the Vidyadhara himself, the Vajra Regent, Sakyong Mipham Rinpoche, and the Dorje Loppön Lodrö Dorje. We aspire that there will be an expansion of this group in the future.

The following is an outline of the three-yana training as taught by Chögyam Trungpa Rinpoche. As a rough sketch, it can be set forth in five phases.

I. Foundational understanding, general overview of the three yanas, the tantric environment and background, lineage teachers

This is the stage of a person’s initial interest in the dharma. Study, individual practice, group practice and sangha all play a part.

The initial practice instructions focus on shamatha-vipashyana, as classically taught by the Vidyadhara, as well as the four foundations of mindfulness and the variety of instructions presented in Shambhala Training levels. Periodic practice of the Sadhana of Mahamudra, which presents the tantric and Kagyu-Nyingma lineage background, is also encouraged.

Among study topics of importance are: spiritual materialism (Cutting Through Spiritual Materialism), a general understanding of the three-yana approaches, the ego’s projection of the six realms, which Trungpa Rinpoche presented in both basic and vajrayana terms (Transcending Madness), and a basic analysis of mind (Glimpses of Abhidharma). In addition, some introduction of the vajrayana background through topics such as mandala principle (Orderly Chaos), as well as the lives of important lineage teachers (Padmakara in Crazy Wisdom, Naropa in Illusion’s Game, and Milarepa).

The Vidyadhara’s teachings in many public books and the several volumes of The Collected Works of Chögyam Trungpa.

Many centers will have course outlines that have been used in the past. In addition, there are the excellent syllabi of the Shambhala School of Buddhist Studies. The study and practice of Shambhala Training principles are also valuable at this stage.

The study of hinayana, mahayana, and vajrayana principles, organized around the selections from the three volumes of the Profound Treasury of the Ocean of Dharma are appropriate at this stage. Since this is a voluminous compilation of teachings from thirteen three-month Seminary programs, it would be too overwhelming to study all at once. In most cases teachers would want to make a judicious selection of readings for discussion.

A group study and practice retreat is recommended at this stage, similar in format to the Sacred World Assembly held in Shambhala in recent times, as is the sitting practice of dathun along with refuge and bodhisattva vows. The Profound Treasury Retreat programs conducted by Judy Lief also provide a good model. The Vidyadhara was very proud of the Seminary format he introduced, which alternated extensive periods of sitting practice with periods of study.

The emphasis here would be on shamatha-vipashyana meditation training, along with the practice of lojong and tonglen. The objective is to offer practitioners a solid grounding in hinayana and mahayana practices and view.

For practitioners who wish to enter the vajrayana, who understand that it entails a deeper level of commitment to basic sanity, and who have a solid foundation in the hinayana and mahayana, we will provide an opportunity to receive vajrayana transmission. In the Vidyadhara’s tradition, he gave this pointing out of the nature of one’s mind prior to beginning ngöndro, the vajrayana preliminary practices.

We have introduced Kagyu lineage ngöndro in a shorter or longer form. The combination of individual and group practice retreats introduced by Sakyong Mipham Rinpoche is an excellent method. The basic principles of ngöndro are very similar across lineages. Therefore, for practitioners who have already accomplished the Primordial Rigden ngöndro, we will provide an abridged approach to the Kagyu ngöndro if requested.

Instructions and support can be offered by many well-practiced senior teachers.

Study at this level would include: ngöndro transmission talks by the Vidyadhara, selected Vajra Assembly talks (from Collected Vajra Assemblies, vols. I and II, best studied in weekend practice intensives); and the Profound Treasury, vol. 3, which discusses vajrayana principles.

IV. Vajrayogini empowerment and the Vidyadhara’s teaching on it; mahamudra retreats

Practitioners who have accomplished or nearly accomplished the ngöndro can request to receive the empowerment of Vajrayogini, which we will arrange through a Kagyu lineage holder. This kind of sadhana practice is a fundamental entry point to tantra practiced by all the Tibetan schools. In this case, we practice the main Kagyu sadhana composed by the sixth Karmapa. The Vidyadhara gave this empowerment every year from 1977 until the end of his life. He spent countless hours with the Nalanda Translation Committee and the Three Yanas Office translating and elucidating this practice, and gave three hundred pages of detailed oral instructions to students.

Vajrayogini is a central practice in the Kagyu lineage for students entering into the actual practice of tantra and mahamudra. As shamatha is a foundation for the hinayana and mahayana paths, Vajrayogini is like a foundation for tantra. Each wisdom-deity sadhana we practice is a way to purify us and expose the potential of our inherent wisdom. Each practice brings gifts as well as more penetrating demands to surrender ego-centered ways of being.

The Vajrayogini principle introduces a vajrayana style of working with emotions through both gradual purification and direct transmutation – in other words, how we open to our emotional process without either suppressing or indulging in it. In this way the practice trains us in transmutation and is a transmission of the five buddha principles. She is a messenger of dynamic emptiness. Such practice also deepens the understanding of devotion – not simply about venerating the masters, but about surrendering one’s being into fundamental wisdom.

The direct-awareness teaching of mahamudra, which originated with the realized masters of India, is a specialty of the Kagyu lineage. It is an ideal complement to the sadhana or wisdom-deity practices that emphasize form. Therefore, group retreats that focus on mahamudra shamatha and vipashyana practice can be very helpful alongside one’s sadhana practice. The mahamudra approach is very similar to the ati approach, but it is said to be gentler and more accessible to most people. The Vidyadhara taught that a mahamudra understanding would be especially important in being able to then understand ati teachings.

If practitioners at this stage also begin to practice the Werma Sadhana that would be excellent. A practice cycle of Vajrayogini, Werma Sadhana, and mahamudra would be a profound expression of the most advanced teachings the Vidyadhara gave to his sangha. Vajrayogini teaches how to transmute root conflicting emotions into wisdom, Werma transmits the Ashe and lungta, and mahamudra is the encompassing principle of the cosmic mirror.

Our tradition also includes further vajrayana practices, as per the Vidyadhara’s wishes. At his request, teachings were transmitted and elucidated by Tenga Rinpoche, Thrangu Rinpoche, Khenpo Tsültrim Gyamtso Rinpoche, His Holiness Dilgo Khyentse Rinpoche, and others. The Nalanda Translation Committee has extensive sadhanas and manuals on these practices, which include:

Also from the Open Torii Initiative: