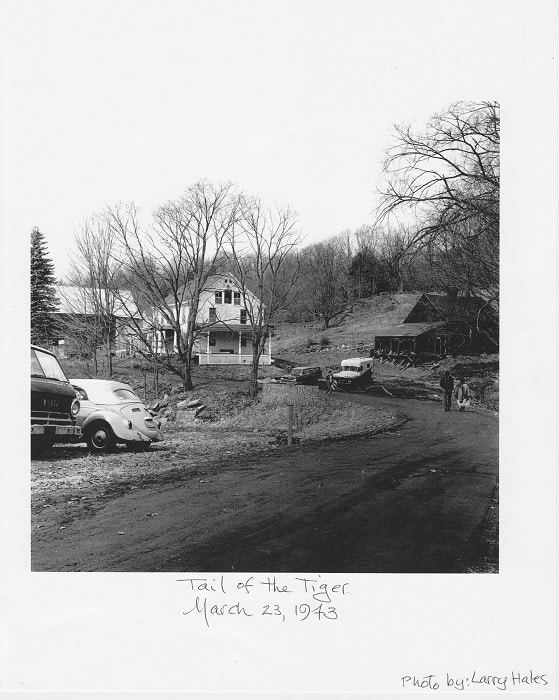 I first met  Chögyam Trungpa at a seminar he gave at Tail of the Tiger after Christmas 1970. A talk was given after lunch which I barely understood. During question period, someone asked the question, “What is effort?” He replied, “Effort is a form of intelligence.”  I said to myself that this is a person who knows what consciousness is. Later, during a personal interview, I remember staring into Chögyam Trungpa’s eyes because I believed that this was what spiritual people were supposed to do. To my surprise, instead of a person looking back at me, I only perceived vastness – like the first time seeing the ocean. I completely lost my ground at that point.  I asked him if he was enlightened. He replied, “The path is the goal.” He then proceeded to give me meditation instruction. He said to expand outwards with the outbreath. I tried something and he shook his head. I tried something else and again no approval. And a third time. Finally, he said, “That’s it.” I wondered how he could read my mind. Later in the seminar, we all went to a health food store in St. Johnsbury in the evening for dinner.  Several joints were circulating. All of us were indulging except Chögyam Trungpa. He just sat there, indifferent to it all.

In January 1983, I attended seminary. I had back problems at the time so sitting was torture. I didn’t realize it was “legal” to sit in a chair. At one point, Chögyam Trungpa asked a carpenter there to build a few oak benches to raise the gomden cushions. I got one and immediately felt better. Only much later did it occur to me that he was responding to my distress.

During the bodhisattva vow ceremony, I walked up to Chögyam Trungpa for the blessing. When I looked at him, he was completely de-materialized – like colored air. On another occasions, I raised my hand during question period. At the time he was talking to someone at stage right. I was sitting stage left. Before he turned away from stage right, I thought I heard him say “Finallly.” (I had never asked a question since 1970.) Later, as we were filing out of the shrine room, someone came up to me and asked why Chögyam Trungpa had said, “Finally.”

During the third month, someone asked a question that could have been asked insincerely or disrespectfully. Whatever it was, Chögyam Trungpa flipped into a stormy (and frightening to me) mode that remained for the rest of seminary. I call this his wrathful mode. I had seen it once before at the Keltic Lodge talk a couple of years earlier. No more Mr. Niceguy.

During the third month Chögyam Trungpa began teaching atiyoga. What impressed me was that the atmosphere in the shrine room became thick – like high humidity in a tropical country.  Another participant shared this impression with me. Chögyam Trungpa could teach by creating an atmosphere.

Also during seminary, the teachings on impermanence were getting to me. At one point I felt I had to leave the premises, so I volunteered to pick up some groceries. What I picked up were two bushel baskets of cow’s tongues with the root of the tongue still attached. I never left the premises again. At the halfway point, we had a day off. Two movies were being shown. I chose “Green River”. As soon as it started, I noted that John Wayne was dead. Death and impermanence were inescapably etched into the walls of the Bedford Springs Hotel.

At one point, I had a ‘black air’ incident. i was charged, along with others, with looking after the children while Chögyam Trungpa was presiding over a Sukhavati ceremony in the adjoining shrine room. The children were noisy, and at one point, Chögyam Trungpa left the ceremony  and entered the room I was in, staring at me. I looked away, hoping he would read my thoughts that it was the other child caregivers who were negligent. Shortly after, a dark energy emerged in my being. It seemed that color had disappeared, leaving jus black and white – mainly black. I felt that everyone in the room (during a children’s blessing) was about to murder me at any moment. Eventually after an hour or two, this episode vanished. I realized later that what brought this on was my failure to take responsibility for the children I was charged with.

I never doubted for a second that the Ösel Tendzin issue was anything other than Chögyam Trungpa’s skillful means – doing what he was so adept at – pulling the rug out from under us.

Up to his death, I couldn’t quite believe that Chögyam Trungpa was the real deal— he was so radical. Part of me expected him to do something like run off to Switzerland with all the money. After he died, I realized my mistake. I realized all he ever wanted to do was help people. He definitely helped me.

Thank you to David Birch for asking his old friend Norm to write this down, to Diane Birch for typing the hand written manuscript, and to Norm Braden for sharing these memories, and for taking the time to write it all down in the the old fashioned way, with a pen — a process that was completely normal when we (my friends and I) were young and is now so rare and impressive. 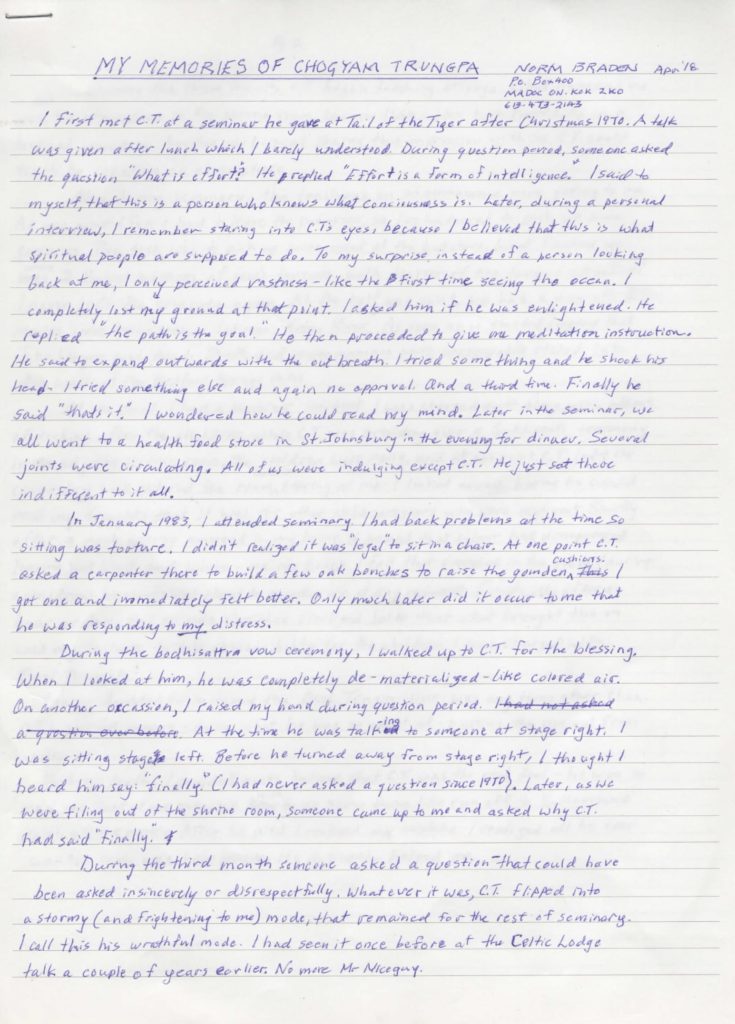 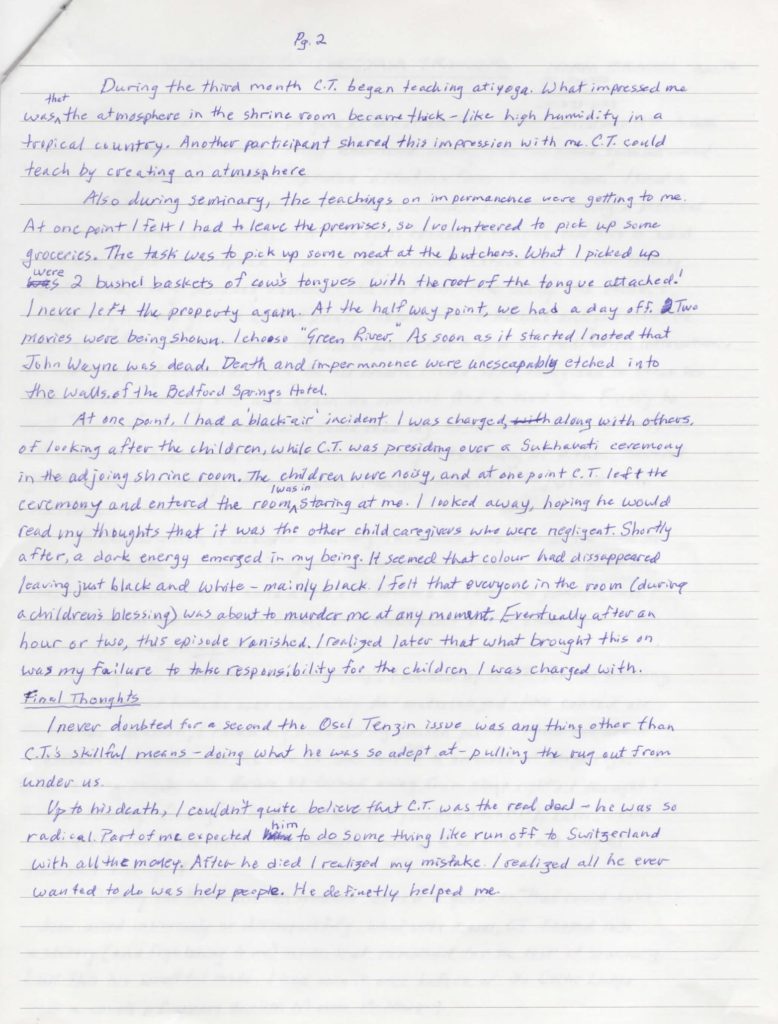