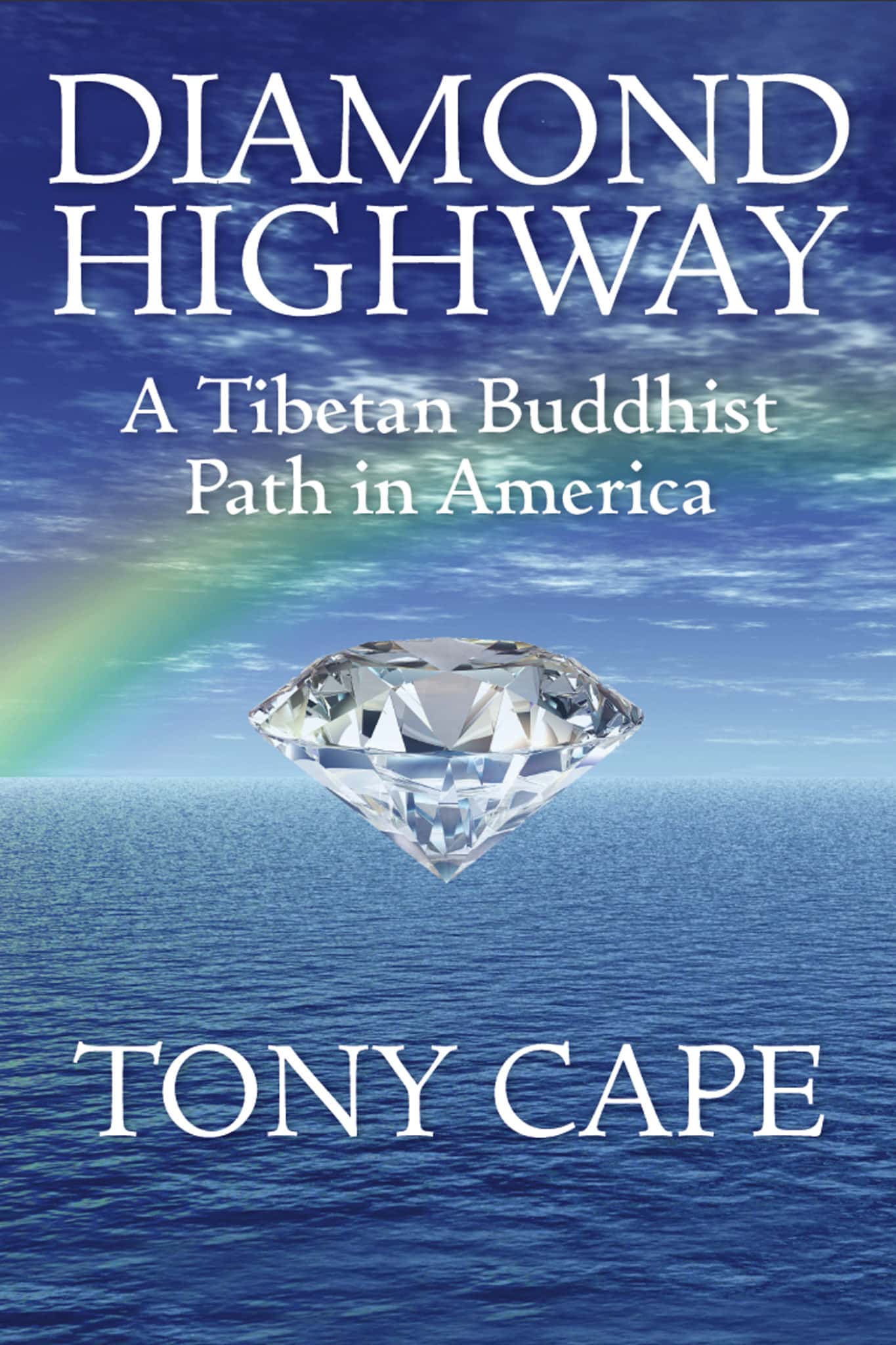 Having finished reading Tony Cape’s memoir late last night, I contemplated what to include in the review and decided to assemble a list: “Reasons to Read Diamond Highway”. It seemed like a good way to start.

1.  You love hearing stories about what it was like to be a student of the Vidyadhara, Chogyam Trungpa Rinpoche and spend close personal time in his presence.

2.  You are interested in the transplantation of Tibetan Buddhism in the West and value evocative accounts and details surrounding the unique situations and events that comprise this chapter of cultural and spiritual history.

3.  You are disturbed or intrigued by the rumors, scandals and accusations concerning alcoholism and sexual misconduct on the part of Trungpa Rinpoche or the Vajra Regent Osel Tendzin, and would appreciate someone addressing these issues openly.

4.  You never heard of the Vajra Regent Osel Tendzin (or very little about him).

5.  You struggle, or know someone who struggles, with clinical depression and would like to hear an account of how one Buddhist practitioner dealt with this challenge in his journey.

6.  You are inspired by writers who exemplify the courage to express their true perceptions, with honesty and integrity.

7.  You have a connection with, or curiosity about, the Dorje Kasung and/or the branch of Kusung (personal attendants) to which Tony belonged.

8.  You aren’t as literate as you wish you were, and would like to painlessly expand your vocabulary.

9.  You are an old dog who can’t remember anymore what it was like in the old days, or wasn’t paying attention, and would like some reminders.

For fun, I thought I would assemble another list: “Reasons Not To”. This one was very short. Other than “don’t like to read” or “too busy”, I could think of only one. If you are someone who wants everything neatly pre-digested, where every ounce of ambiguity has been eliminated, this book might not be for you.

The memoir begins with Tony meeting Trungpa Rinpoche in 1976 and lucid descriptions of his first impressions. “It is the kindest face I have ever seen …his whole presence is subversive, iconoclastic…” In just a few words, Tony repeatedly brings Rinpoche alive, evoking inexpressible, precious moments of recognition. The memoir then backtracks in time to Tony’s upbringing in the north of England and his education at Cambridge where he becomes the reluctant editor of its student magazine. He makes a telling observation about himself, “I wanted to carry a spear… not occupy center stage”.

After graduating, he gravitates to journalism. His first post is in Northern Ireland as “intrepid chronicler of sectarian conflict” for the Belfast Evening Telegraph in 1974. In this volatile powder keg of violence, Tony’s nerves are badly shaken. An ill-timed acid trip is the catalyst for his descent into major suicidal depression. Leaving Belfast and struggling to recover, he learns that the IRA was using the ground floor of the building where he lived as a bomb factory and storage dump for explosives.

The next year he travels 300 miles by motorcycle to Samye Ling to learn about meditation, but finds the environment bleak, and buddhism “foreign and inaccessible”. Akong Rinpoche gives him a copy of Meditation in Action, and he purchases Cutting Through Spiritual Materialism before leaving. He reads about a place called Naropa Institute, but visiting the U.S. seems like a far-fetched dream. Somehow he manages to do exactly that several months later, ostensibly to re-connect with a girlfriend he can’t seem to let go of. His journey to America and until he meets Trungpa Rinpoche in Colorado meanders a bit, but the payoff is substantial.

Tony vividly describes Boulder and the writing scene at Naropa Institute circa 1976, rubbing elbows with Allen Ginsberg and other notables, and soon after, his decision “to find out what this bizarre buddhist military thing was all about”. He is introduced into the Vidyadhara’s service by the inimitable John Perks, with whom he forms a delightful bond. Being British has its advantages, and we see how this becomes a vehicle for playful and intimate communication with the Vidyadhara in Tony’s eventual role as kusung. Later on, he also serves as kusung for the Vajra Regent Osel Tendzin.

Tony’s memoir is punctuated by deft depictions of major programs and events such as 1980 Seminary, and the Kalapa Assembly and Magyel Pomra Encampment of 1984. To read these descriptions is to enter into them. There are also clear and elegant summations of many aspects of the mandala, such as the presentation and intention of the Shambhala teachings. In many accounts, I was moved by a quality of the writing that is difficult to describe. I think Tony touches on it when he writes: “…as if by becoming no one, people became themselves,” I believe Tony’s writing, in many places, manifests exactly this quality, free from ego. I suspect it may be connected with the kusung role—precisely by not being “center stage,” but acutely attentive to the space.

By including his personal journey with serious depression, Tony bridges a threshold in the growing body of literature on the life of the Vidyadhara and his students. For we are all damaged human beings, to one extent or another, travelling on this path. As much as we think we understand spiritual materialism, there is a tendency, individually and collectively to deny this in our spiritual aspirations. In the same way the Vidyadhara “took off his robe”, and “got down off his throne”, Tony has made his own journey transparent, with tremendous humility and genuineness.

As for his treatment of the complex subject of major depression in the context of spiritual practice, Tony’s memoir feels to me like the beginning of a conversation or inquiry that will no doubt continue. As Tony writes “…there was a combination of stressors combined with a mystery factor that resists explication…” Several provocative elements touched on include the way in which profound spiritual openings may relate, or in some way even lead, to a subsequent episode of serious depression. In a similar vein, can a particular form of practice help someone recover? The fact that these questions are not fully explored is not a criticism of the book, but rather points to vast areas of inquiry it opens up.

On the whole, despite occasional unevenness, I found “Diamond Highway” to be a lucid evocation of the times and teachings of Trungpa Rinpoche, from the unique viewpoint of a devoted student in his close service. In particular, I have tremendous respect for Tony’s superb and balanced handling of the controversial issues addressed toward the end of the book. He writes: Different individuals who have advised me on the composition of this memoir have suggested I avoid discussion of this topic altogether, because I lack what the tantric tradition calls “the higher perceptions” …I cannot comply with this advice.

Tony does an outstanding job of unpacking aspects about the situation not commonly known, with sensitivity and discernment. He goes on to examine the role he may have played, along with others, in enabling whatever misdeeds may have occurred. He does this with shocking directness, kindness, and honesty. In doing so, with such purity of heart, he does indeed carry the spear of warriorship. Jolly good show!

The Chronicles
By Grant MacLean Like many others, on re-reading Born in Tibet, I found that there were spiritual and inspirational layers I'd missed before. But it...

The Genuine Face of the Guru