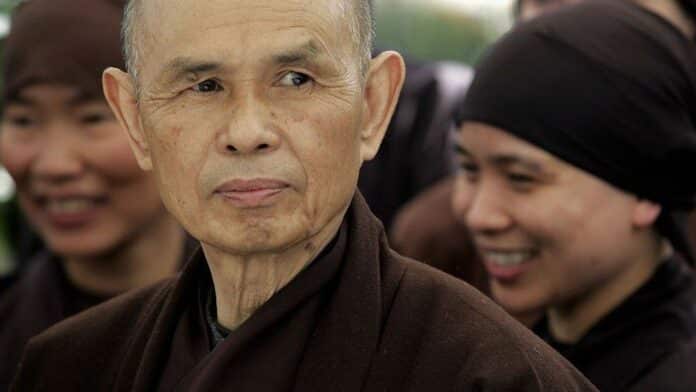 The most venerable Thich Nhat Hanh has passed away. What a great loss to this world — a world entangled in both past and future; a world that has almost no interest in dwelling in the present; a world that has forgotten the value of a smile; a world that has forgotten how to really be there when it brushes its teeth. For those who care about the Buddha’s teachings, Thich Nhat Hanh’s passing is an especially heavy loss. In this modern world, an ancient wisdom like Buddhism finds it so difficult to reach out to people that were born into cultures that have no notion of aniccā, duḥkha, anattā and nirvana. How can people today be encouraged, at the very least, to move closer to an appreciation of these ideas, let alone generate the wish to live by them?

Buddhism is perhaps the oldest and most systematic, scientific study of mind and matter ever. Yet it is constantly, almost ruthlessly dismissed as a ‘religion’, a ‘doctrine’ or at best ‘ancient Asian thought’. Even so, Thich Nhat Hanh’s determination to open the door to the Buddha’s teachings never faltered. He consistently made an enormous effort to make the world curious about Buddhadharma. And he succeeded. Hundreds of thousands of people have now not only heard of mindfulness, but they try to practise it. This is an amazing achievement, one that generally takes centuries to accomplish. Thich Nhat Hanh managed it in one short, tumultuous lifetime. As buddhists, we owe him a tremendous debt of gratitude.

Looking ahead, those of us who admire Thich Nhat Hanh and those who actively follow him, must remember that while he is best known for his ability to reach a wide audience, especially in his many books — for example, Being Peace, Peace is Every Step, How to Love, The Miracle of Mindfulness — he should never be discounted as just another new age guru. The simple fact that he was a monk for his entire life demonstrates that there was far more to his approach than merely “Smile”. From the time he first saw an image of the Buddha at the age of 7 or 8, Thich Nhat Hahn harboured a strong desire to be like him. At 16 he was ordained in the Tu Hieu Temple in Hue city in Vietnam, and chose to return to die there some seven decades later. If this approach does not demonstrate that his Buddhadharma has both great depth and substance, then nothing will. He shall be remembered by us all as a great victory banner of Dharma.

Chögyam Trungpa on “The Teacher”

Walker Blaine
Blaine talks about the origins of his music album