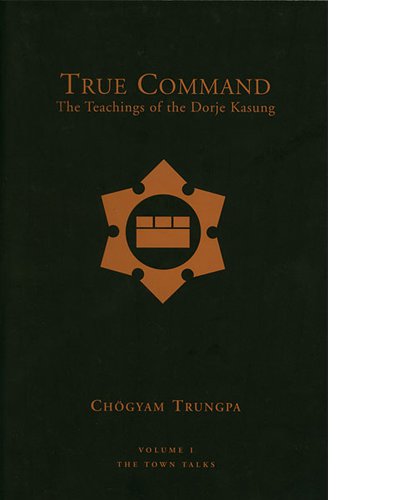 The Dorje Kasung is a service organization that was formed by Trungpa Rinpoche to protect the teacher and the environment in which the teachings are presented. Most of Rinpoche’s teachings on kasungship took place in the context of kasung ceremonies, celebrations, and meetings in the seventies and early eighties. Since then, these teachings have been closely held by the people who were there and by the Dorje Kasung organization. These talks and the environment in which they took place were extraordinary?intimate, rugged, and … well, I guess you had to be there, until now. True Command successfully provides a new context for these teachings, one in which they can be experienced, studied, and appreciated by a wider audience. What were secret (if not forgotten) teachings are now available to the public. James M. Gimian’s brilliant introduction is an historic achievement. Thanks to his patient and lucid explanation, principles and forms that have been difficult to talk about outside the ranks of the Dorje Kasung are now thoroughly examined in print.

The Art of Calligraphy: Joining Heaven and Earth

The Heart of the Buddha

Glimpses of Space: The Feminine Principle and Evam

The Lion’s Roar: An Introduction to Tantra