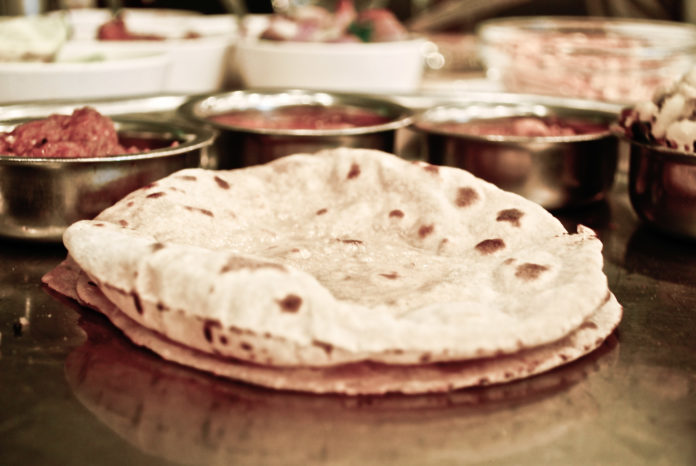 The first time I cooked Indian food at Kalapa Court in Boulder was in the summer of 1978. I was absorbed searching for some ingredients in the corner cupboard of the kitchen when someone began tapping on my back. I turned around and was astonished to find the Vidyadhara real close his big face smiling right into mine. He began saying something incomprehensible I could not make out. The surprise and puzzlement caught me unguarded and I was stuck dumb trying to understand what was going on and how he could have crossed the entire kitchen without me noticing. But there was no time for explanations because he continued talking seeming gibberish and was so unavoidably close I felt the demand for complete attention to be able to respond at all. The effort was useless and as I stood there hanging helpless I saw the room as a whole as if being in a three dimensional picture with much in-depth perspective and emotional tone to it. The kasung was at due distance behind in respect of our exchange. I realized the Vidyadhara was talking Hindi which I had learnt a little when I was a boy in India but had forgotten long ago. I could not grasp what he said but sensed his eagerness and longing to speak it. It was not just the intonation and caress of his voice that was so expressive. His whole person was showing enjoyment and actual affection for the language, in fact the entire room reflected that warmth. Even the light coming through the windows on the kitchen counters and floor had meaning. His beaming gaze was looking straight at me waiting for a reply. It was a total dismay not to be able to converse and content him. I heard my broken voice saying sadly: “Oh Rimpoche I’m sorry I don’t remember Hindi any more”. I was not used to such intimacy which suddenly seemed awkward and said hurriedly “what kind of pickles would you like with the food?”. He replied “mango pickles” and left.

Later that day Shakti Rose came to help with cooking and was rolling out chapattis. The Vidyadhara walked up to her counter and suddenly whacked the one she was working on making the table jump and said something to her. When he left she came over amused and referred chuckling that the Vidyadhara said you have to hit the chapattis like that to make them puff up. Actually in India chapattis are often slapped back and forth between the hands when they are prepared by skilled cooks. When all the dinner guests were seated outside in the backyard he asked the servers to remove the silverware so everyone could eat according to custom with their hands.

In 1984 (or 1985) I flew from Switzerland to Halifax to attend the first Sangha conference. The Vidyadhara requested an Indian breakfast. I was not quite sure what to cook since it is unusual to have hot spicy Indian food in the morning just after wakeup. But then I knew he also did a lot of unusual things. He however resolved the problem by asking for chicken pullao which I then realized is actually an excellent morning choice because it is one of the lighter dishes omitting thick sauces and sharp spices and uses the sweeter ingredients such as cardamom, cinnamon, cloves, raisins, almonds, and so on. After the food had been served and eaten I was cleaning up in the kitchen. The kusung came in looking smart and announced with an official tone “the Vidyadhara thanks Marco Polo for coming so far to cook”. He said it so factually and confidently it sounded as if he knew what he was talking about but it wasn’t quite clear to me. I took note mentally and thought “Hmm, well at least he liked the food”. I realized later the extent of the remark. Identifying me with Marco Polo the Vidyadhara was obviously acknowledging the combination of my oriental and Swiss Italian backgrounds and the value of them all. He was appreciating the Venetian explorer and other travelers for their efforts to discover and bring back unknown goods and approaches from other countries. He valued the bridging of the East and West and how different traditions enrich each other. The enigmatic thank you to Marco Polo expressed gratitude to many people, voyagers and cultures in a very neat and condensed way.

A 1978 Talk to Sangha Children