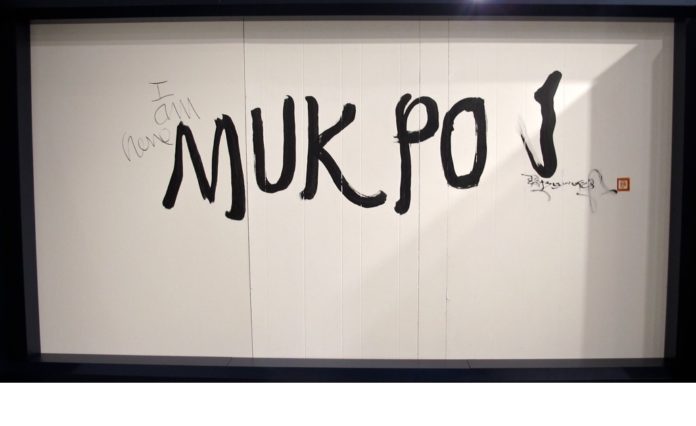 From the tokonoma entrance wall on through the graphics, calligraphies, flower arrangements, photos, and video shots of current sangha members to the multiplicity of books in most of the planet’s primary languages, to the quiet meditation alcove and Alan Sloan’s expert video for mindfulness practice in everyday life, this exhibition draws down the mind, style, and elegant surprise of the Vidyadhara’s own installations in Denver and LA in the early 1980s. Especially in the turn-the-tokonoma-corner and come face to face, again!, with the flawlessly restored big wall, big stroke proclamation “I am here MUKPO” dramatically framed in a large black cabinet designed by Bob Rader, restored by Ann Shaftel, and built by Mark Russell.

The exhibit condenses Chögyam Trungpa Rinpoche’s worlds and world-spanning journey from Tibet to Nova Scotia on one wall with crisp graphics (a Rolls Royce Silver Shadow symbolizes the UK), his own hand drawn map of escape from Tibet (recently dramatized in the video documentary, Touch And Go), and photos: Rinpoche and Khenpo Gangshar, arms raised in surrender mudra; Gary Snyder’s photo of Allen Ginsberg and Rinpoche in India (circa 1962); his Spalding Scholarship Class photo at Oxford—a mix of students and skin colours from across the British Empire; his first-Tibetan-to-hold-a-British-passport photo (so young!); and that “Tibetan Prince” with his tiger smile sitting in the midst of the court of the Queen of the Annapolis Valley Apple Blossom Festival in 1977.

Of the one hundred and ninety-three “I Am Here” video portraits, the ones that most charmed me were Alistair Littlefair’s “I Am Here…on planet Tatooine”; Jan Morrison’s “…leaving the Farmer’s Market pretending that blue car [a Lotus] is mine”; Brad Hoffman’s “…covering the puck” completely; Tony Matthews in round-lens dark sunglasses; Richard (back-to-the-land) Haspray in bib overalls; and Dave Frevola’s light-smile reminder “I am here…getting ready to die.”

When the “I Am Here” wall was removed from the Dharmadhatu in the early 1980s, the back of one panel was briefly displayed at the new Tower Road Centre for sangha members who were invited to sign it with the date of their arrival in NS. Having come in 1981 when the phone list was less than a page, seeing those signatures again reminded me of how many are still here and how many more have joined, but also of how many have left  back to the States, or for work elsewhere, for other teachers, or forever (Joshua Zim).

The Vidyadhara was a controversial teacher both here in the West and among Tibetans. Because he was such himself, the Vidyadhara attracted a sangha of geniuses and extremists who were not particularly religious or devotional. In fact, many were quite suspicious of such trips, which the Vidyadhara and the sangha rigorously cut through. The core of his work was to demand that his students test the validity of his teaching against their own experience, which led to conviction and commitment for those who became his students. For them, as one said to me before leaving NS last year, the experience was, and is still, one of having met “the incomparable guru.”

This small exhibition offers a glimpse of his journey, his presence, and the vast world of action and practice he created around the globe. And here.

Meditation: The Path of the Buddha

The Myth of Freedom and the Way of Meditation