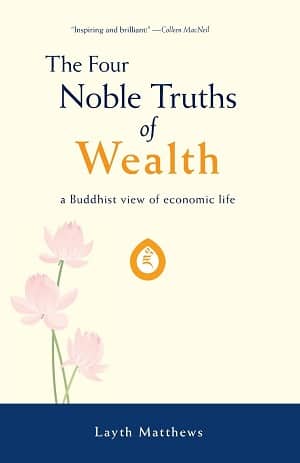 Layth Matthews is a long-time student of Shambhala and Buddhist dharma, living in Victoria, BC where he served as the Shambhala Centre Director from 2010 – 2013, and works as a mortgage broker and financial advisor.

Within the first few years of his arrival in North America in 1970, Chogyam Trungpa Rinpoche gave a series of programs entitled, “Work, Sex and Money” His choice to talk so directly about the everyday issues of life can be seen as a forerunner of the Shambhala teachings with its emphasis on warriorship in the world and the social process of creating good human (enlightened) society.

More than forty years later, Layth Matthews, a student of Trungpa Rinpoche and his son Sakyong Mipham, has published an exploration of how the Buddhist insights into the nature of mind and experience, particularly as expressed in the Shambhala lineage of Sakyongs, can be applied to the challenge of working with money.

Using the Four Noble truths, the very earliest teachings of the historical Buddha, as an organizational outline, Mr. Matthews crafted a series of public talks, open to anyone without prerequisites. These talks form the basis of the book and give it a lively and playful sense of conversation.

Mr. Matthews describes himself as a Shambhala Buddhist teacher and a Harvard trained economist. He has worked as a professional in the world of finance for more than thirty years. The challenge of bringing together these two aspects of his life forms one of the interesting sub-texts throughout the book. He shares his own contemplations, and advice provided by various teachers over the years, on the question of how or whether it is possible to successfully conduct for-profit business within a context of Buddhist-based ethics. (Spoiler alert, it is possible, although certainly challenging).

As the title indicates, Mr. Matthews uses the concept of “wealth” as the basis for his contemplations. “Wealth,” as opposed to “money” has a larger and more complex meaning. In that broader context Mr. Matthews is able to introduce two inter-related core concepts, “inherent wealth” and “poverty mentality.”

It may be evident that these concepts, and their relationship to contemplative practice, are quite fundamental in the Shambhala vision. Inherent wealth can be seen, and experienced, in relation to people (including ourselves), situations and the world of phenomena. Poverty mentality, on the other hand, encapsulates the ego-based struggle, never fully successful, to shape phenomena to our individual concept of what it should be. This is “basic goodness” versus “setting sun.”

Money, as an essential component in our current social system, offers a powerful opportunity to observe and experience the difference between taking a view of inherent wealth, as encouraged by the Shambhala teachings, as opposed to using the filter of poverty mentality. The former yields appreciation and even joy, the latter promotes discouragement and even depression.

Layth Matthews’ book provides a journey that will be accessible to readers with little background in Buddhism and at the same time prove evocative for those who have spent decades practicing and studying. Students of Trungpa Rinpoche will find echoes and memories of his presence and language. In that regard, the thrust of the book might be summarized in a quote from the first chapter: “Seeing the economic aspects of life as a spiritual path has great potential to help us cheer up.”

Lama Pema on Supplication to the Takpo Kagyu

Chögyam Trungpa Rinpoche
...the older I get, the more of a Kagyü person I become. -CTR