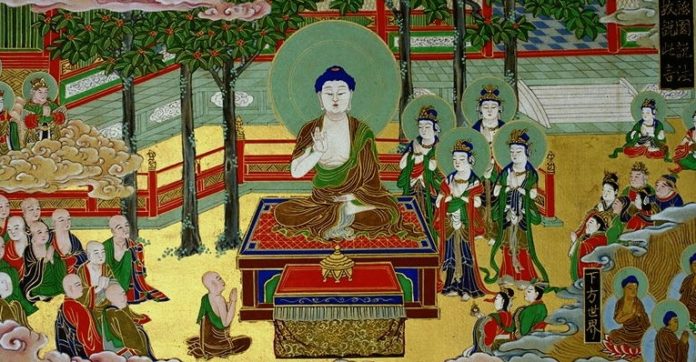 While the Buddha is in the Jeta Grove, he asks Mañjuśrī to teach on the nature of reality. Mañjuśrī’s account upsets some of the monks present in the gathering, who subsequently leave. Nevertheless, by means of an emanation, Mañjuśrī skillfully teaches the distraught monks, who return to the Jeta Grove to express their gratitude. The monks explain that their obstacle has been a conceited sense of attainment, of which they are now free. At the request of the god Ratnavara, Mañjuśrī then teaches on nonduality and the nature of the bodhisattva. Next, the Buddha prophesies the future awakening of Ratnavara and other bodhisattvas present in the gathering. However, the prophecies cause Pāpīyān, king of the māras, to appear with his army. In a dramatic course of events, Mañjuśrī uses his transformative power on both Pāpīyān and the Buddha’s pious attendant, Śāradvatīputra, forcing both of them to appear in the form of the Buddha himself. He then makes Pāpīyān and Śāradvatīputra teach the profound Dharma with the perfect mastery of buddhahood. Numerous bodhisattvas appear from the four directions, pledging to practice and uphold the sūtra’s teaching. The Buddha grants his blessing for the continuous transmission of the sūtra among bodhisattvas in the future.

The Chronicles
Part one focuses on David's years as Trungpa Rinpoche his personal secretary and head of the Kasung. Part two is a discussion about the principles of commmand and protection. Part three is about his many activities since leaving Boulder in 1983.

The Essential Chögyam Trungpa for Youth

Bill Wooding on Being Gay in the Sangha