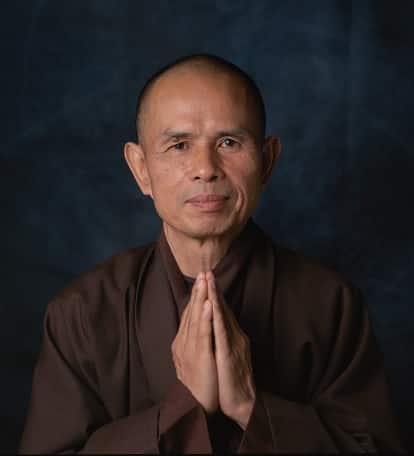 Just look deeply at this photo for a moment. Allow yourself to see and be seen…feel that outbreath.

Meet Zen Master Thich Nhat Hanh who died January 22nd in his root temple, Tu Hieu in central Vietnam, where he was ordained as a bhikshu 70 years prior…70 years! Among his students, he is affectionately also known as Thay (pronounced “Tay” or “Tie”), which is Vietnamese for teacher.

Hearing of Plum Village retreats in France led me into three weeks of the summer retreat to test it out (really to test me out) before returning for their annual three-month Winter retreat in 2000/2001. I took refuge with Thich Nhat Hanh and was clearly inspired when three strong western female novices, from a Tibetan lineage, received full ordination. ‘Thay’ had kindly offered the full ordination vows to novices of other traditions since 1994.

In 2009, while discussing my potential bhikshuni ordination with Ani Pema at Gampo Abbey, Ani-la clarified that the Sixteenth Karmapa had cautioned her to be very careful to find an ordination with a pure Vinaya lineage. I am completely certain that I found just that in Thay, and I feel blessed to have such a connection with Plum Village. As I write, I’m smiling in wonder at the karma that led the Irish Catholic daughter of a career Army Colonel (who was one of the US Military advisors in Vietnam in the early fifties) to be receiving bhikshuni ordination from the very venerable Vietnamese Buddhist monastic in 2010.

Since 1994, Thay created many Zen calligraphies in western Roman script which were
placed in his practice centers. His simple and elegant calligraphies convey powerful teachings and have been exhibited around the world. Personally, I remain consciously ‘caught’ by this one [below], displayed abundantly during my first visit to Plum Village. View More of his calligraphies

In the start of the potent film Peace In Every Step from a New York retreat for veterans, Thay said something like:

I have suffered a lot. I have known what is the war. I have seen brothers & sisters dying.  I, those of us who have experienced the war directly, we have a duty to bring the truth of the war, the experience of the war, to those who have not experienced the war … I can talk with you like this because I’m like you – we were all born in war and we know what it is. But the war is not in us only, it is in everyone, veteran & non-veteran…

Such direct response to such need, again and again; a lifetime of insightful action.

This lovely 10-minute video—Calligraphic Meditation, The Mindful Art Of Thich Nhat Hanh—invites us to share the meditative space that Thay created.

This poignant time, following the news of Thay’s passing, has strengthened my felt connections. For this I am grateful. So much is being shared by those who love him, including:

This body is not me.
I am not limited by this body.
I am life without boundaries.
I have never been born,
and I have never died.

Look at the ocean and the sky filled with stars,
manifestations from my wondrous true mind.
Since before time, I have been free.

Thank you for being with us for the week of memorial ceremonies for Thich Nhat Hanh. We have felt deeply touched by your loving messages, stories of transformation, and heartfelt presence participating in the ceremonies with us.

Throughout the week, many of us have recognized the importance of Thay’s insight that “one Buddha is not enough.” We have each been inspired to nurture our own capacity for awakening, and felt moved to continue Thay’s legacy of mindfulness, peace, and community building. This energy has been palpable.

We feel the strength of our community, the solidity of our practice, and the joy of being alive. Together, we are waking up. Together, we can realize Thay’s vision that “the next Buddha will be a Sangha.”

The Rain of Wisdom

Chögyam Trungpa Rinpoche
An extraordinary collection of the poetry or songs of the teachers of the Kagyü lineage of Tibetan Buddhism, to which Chögyam Trungpa belonged. The...

The Simplicity of This Moment