Although a full biographical sketch is beyond the scope of this introduction, some understanding of Trungpa Rinpoche’s life journey as it pertains to the development of his calligraphy practice may be helpful. Vidyadhara the Venerable Chogyam Trungpa Rinpoche, Lord Mukpo, was born into a semi-nomadic peasant family in a remote region of Eastern Tibet in or about 1940. At the age of one year he was recognized as the eleventh tulku (reborn teacher) in the lineage of Trung Mase, a great Tibetan Buddhist master of the fifteenth century. He was brought to the monastery of Surmang, ancient seat of the Trungpa line, and began the rigorous monastic training that would prepare him to assume its leadership. Though no one could have imagined it then, this training also laid the foundation for his remarkable career as a Buddhist teacher in the West from the mid-1960s on.

In his autobiography, Born in Tibet, Trungpa Rinpoche mentions Tibetan Calligraphy as an important component in his training from an early age. Responding to a question during the 1979 “Dharma Art” seminar, he gives the following account: “When calligraphy is taught in Tibet, China, or Japan, at first you don’t do your calligraphy fast at all. The ‘grass style’ or cursive style is not taught right away. You are trained first in the very classical style of how to make a stroke, how to dip your brush, how to use the nib in your inkpot. Everything is precise, very precise. In fact, at the beginning you just learn to make straight lines on your paper, which is quite boring from the American point of view. But one has to go through those processes. You cannot become a full-fledged so-called artist on the basis of frivolity and quick jumps. There is no such thing as a crash-course Berlitz school of art. That’s a contradiction in terms.”

After mastering straight lines, Rinpoche would have been set to work on learning the several varieties of the formal cursive script called u-me. At some point he would have also practiced u-chen, the block-letter alphabet adapted from an Indian script in the seventh century—the same letters that are painstakingly carved in reverse on woodblocks in the traditional technique for printing sacred texts. Finally, he developed his own distinctive style of the fluid cursive script known as chu-yik. In some cases (see below), block letters are employed for a main text consisting of a single word or seed syllable, upon which a longer passage written in cursive expands or comments.

Growing up in Eastern Tibet, Trungpa Rinpoche would have had considerable exposure to aspects of Chinese and Mongolian culture. Though he does not mention it specifically, one may guess that he would have seen Chinese calligraphy in some form from an early age (including the missives of a rapidly encroaching Chinese Communist regime). His initial exposure to Japanese culture, which would play so large a role in his work both as meditation teacher and artist, seems to have occurred during the three years he spent in India following his escape from Tibet in 1959. From India he went to England and Oxford University, and it was during this period that he undertook a concentrated study of ikebana, Japanese flower arrangement, under Stella Coe, a prominent British teacher in the Sogetsu line. Here Trungpa Rinpoche would have worked hands-on with the organizing principles of heaven, earth, and human that form the subject of his 1979 Dharma Art Seminar at Naropa.

Shortly after arriving in North America in 1970, Trungpa Rinpoche had two auspicious meetings in California with Shunryu Suzuki Roshi, founder of San Francisco Zen Center and a key figure in the establishment of genuine Zen practice in the West. A powerful rapport arose between the two teachers, the younger at the outset of his career and the older, as it turned out, nearing the close of his. Trungpa Rinpoche was excited by the elegance and simplicity of the Zen aesthetic. Henceforth it became a key to many aspects of his re-visioning of Tibetan Buddhist tradition for the West. His dialogue with Zen, including Zen calligraphy practice, continued in succeeding years with other prominent Japanese teachers in the West, such as Taizan Maezumi Roshi and Kobun Chino Roshi.

The Japanese current in Trungpa Rinpoche’s work culminated in the arrival, in 1980, of Kanjuro Shibata Sensei. Twentieth-generation bow maker to the Japanese Emperor and master of Kyudo, the ancient art of Japanese archery, Shibata Sensei came to America at Trungpa Rinpoche’s invitation to train his students in kyudo and, in a larger sense, in the court and warrior traditions of feudal Japan. A close colleagueship, based on mutual respect, developed between the two and further piqued Rinpoche’s interest in things Japanese and Chinese. He applied himself to the study of kanji, the Chinese ideograms that for thousands of years have been the vehicle of much of the world’s greatest calligraphy.

Trungpa Rinpoche delighted in having partners in the creation of art. At times he presented this as a challenge, as when he would start off a spontaneous poem and then—unexpectedly, perhaps—call upon everyone present to contribute a few lines before “capping” the group effort with his own finale.

This period also marked the culmination of Trungpa Rinpoche’s teachings concerning the Kingdom of Shambhala. He lost no time in putting kanji to use in a series of calligraphies expressing key Shambhala ideas: Great Eastern Sun, emperor, windhorse, kami. Often he would painstakingly fashion the formal kanji symbol and then fluidly add the identical word in Tibetan. Or, if his friend Shibata Sensei were present, he would request him to execute Japanese calligraphy to mirror his own in Tibetan.

Trungpa Rinpoche delighted in having partners in the creation of art. At times he presented this as a challenge, as when he would start off a spontaneous poem and then—unexpectedly, perhaps—call upon everyone present to contribute a few lines before “capping” the group effort with his own finale. One of the funniest and most captivating examples of such artistic partnering is the joint calligraphy with Karel Appel, the eminent Dutch artist, done when Appel visited the Naropa Institute in the early eighties.

Vowel sounds in Tibetan, not unlike Hebrew, are represented by signs above and below the consonants. This provides a pleasing vertical dimension to the writing that complements the left-to-right axis of the letters. Although Tibetan, like English, is normally written horizontally, Trungpa Rinpoche frequently arranged words and even separate syllables vertically, thus achieving an effect closer to that of Chinese or Japanese calligraphy.

Trungpa Rinpoche’s Tibetan calligraphies, executed with Japanese brush and sumi ink, represent a creative merging of two distinct Eastern traditions. The traditional writing implement of Tibet is the bamboo pen. As in Hebrew and Gothic lettering, the pen lends itself to straight lines, sharp angles, and abrupt transitions from thick to thin. The brush employed for Chinese and Japanese calligraphy, on the other hand, is given to sinuous curves and subtle modulations of direction and stroke width. Rinpoche (as in so many matters) got the best of both worlds.

Inevitably, Trungpa Rinpoche also experimented with calligraphy in English (see example below). However, Roman lettering offers much less dynamic scope than the Eastern written symbols, and it is certainly for this reason rather than any cultural bias that Rinpoche stuck mostly to Tibetan and, later, Chinese and Japanese, in his calligraphy. (By contrast, his mature poetry is almost entirely in English, which offered him a much larger stylistic and imagistic scope than Tibetan). There are even examples of Hebrew calligraphy by Trungpa Rinpoche; although he did not know the language, he appreciated its calligraphic potential and was delighted to copy from words written out by students of Jewish background.

Another frequent subject of Rinpoche’s calligraphies are “seed syllables.” In Vajrayana Buddhism, certain monosyllabic sounds—OM is the best-known example—serve to embody the essential energy of a tantric deity. Voiced and visualized in meditative practice as a means for rousing the deity’s presence, seed syllables also serve in written form to empower places and representations and generally to protect practitioners’ state of mind and sacralize their perceptions. The calligraphy HUM BHYO (below) combines the seed syllables of male and female protectors, Trungpa Rinpoche executed and presented this calligraphy each time a local dharma study group became a Dharmadhatu, a full-fledged and legal member of Vajradhatu, the international network of Buddhist practice communities that he founded.

There are also abstract calligraphies, dating mostly from the late seventies. They seem to represent a convergence of several artistic disciplines: traditional Eastern calligraphy, Tibetan thangka painting (there are a handful of gemlike traditional thangkas that Rinpoche painted early on), experiments with watercolors, and occasional small drawings, often of a humorous sort. Just as his poetic voice, which at first was imitative of both Tibetan and British traditional modes, released into something much freer and more idiosyncratic after his arrival in North America, so Rinpoche’s use of brush and ink became progressively bolder and more original. In the early seventies he experimented with ink washes to create a background or textural space, against which he calligraphed a symbol or an abstract image, often organic in feeling. But the technique he settled on and stayed with was one in which space is articulated simply by the contrast of the white paper and the black gesture that it accommodates.

Trungpa Rinpoche regarded the merchandising of art as corrupting, to both artist and audience. Although in later years he was generous in executing calligraphies for sale at benefit auctions, Rinpoche himself never did artwork for the purpose of generating income. Unlike his poetic composition, however, which seemed to occur spontaneously, Trungpa Rinpoche’s calligraphies were almost always done for some specific purpose. Many were made for the walls of practice centers such as Karmê Chöling in Vermont, Rocky Mountain Dharma Center in Colorado, or the numerous Dharmadhatus in cities throughout North America and Europe. Others were presented to individuals. In fact, one can often identify the homes of his married students by the framed calligraphy hanging above the living room mantel—a wedding gift from Rinpoche. Or a student setting up in business would request a calligraphy to hang auspiciously in the new office. Some calligraphies were executed publicly in the course of programs on “Visual Dharma” or “Dharma Art.” In the late seventies and early eighties he did a series of major dharma art installations in which calligraphy appeared as just one element among an entire arrangement of room space, furnishings, art objects, and large flower arrangements.

Thank you to Abbie Halpern for her assistance in preparing this article for online publication. 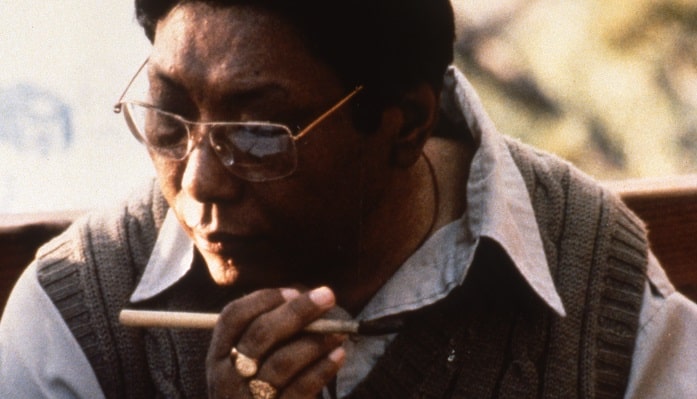 Francesca Fremantle
To think of Trungpa Rinpoche it is not just to remember an extraordinary man, but to be drawn into the depth and vastness of...