On that first afternoon, Ferry Beach was still just a conference center. Its buildings sat right at the edge of tall grasses that led to a highly swimmable beach. There were forest groves, and peaceful gardens—it was a beautiful, but normal place. I walked into what people were calling the shrine room, and found a messy gym with a handful of busy volunteers, building, and cleaning, and moving things into place.

This was in early June 2014, and earlier that day I had met my friend Harry at Grand Central Station. We headed north to a small town on the Hudson, and caught a ride to Maine from a woman I met on ride share. A few hours later, we stepped out onto the gravel parking lot of Ferry Beach and took in a lungful of unimaginably clean non-industrial non-Brooklyn seaside air. “Ahh, a retreat.” 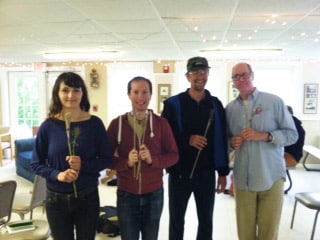 I had decided to attend at the very last moment and hadn’t given much thought to what I was about to do. I knew that Acharya Judith Lief would teach on The Profound Treasury of the Ocean of Dharma books, the PTOD as they are known. There are three of these volumes, which contain all of the seminary teachings given by Chogyam Trungpa Rinpoche over the seventeen years that he spent in North America. I knew that last year they covered Volume One—the Hinayana—and that this year we would study Volume Two—the Mahayana. What I didn’t know is that, while it had all of the classic hallmarks of retreat  meditation, tea and silence—what I was really about to do was less retreating, and more full on life-immersion.

Looking around at dinnertime, we were an unlikely group of all kinds of people gathered from all over the place. Some of us were new Buddhists; some of us had been trying to meditate for many-a-decade.

We were casual truth seekers and accomplished Zen nuns. We were young and old, and didn’t have much in common except that we all have been touched by the teachings of Chogyam Trungpa Rinpoche, and wished to study them further.

This is a powerful connector, and it makes for a simple mandate. Despite any current affiliations to teachers and organizations, and despite the innumerable roads that led us there, we all had come with one intent.

Later on that first day I went back to the gym, and was shocked to find a shrine room. It was like someone had drawn a circle in the sand, said “this is a palace,” and we believed it was, and then it was. Along with so much hard work of so many volunteers who toiled tirelessly for months, some magic seemed to set in, making a real, awake, dharma-ready environment. It was, as Barry Boyce said, a pop-up mandala.

We had our unlikely sangha, and our circle in the sand. Enter the teacher. Acharya Judith Leaf, editor of the PTOD, was strong and kind, and brought the teachings off the page where she had put them, out to the brand new shrine room, and into our hearts.

It is a fascinating sensation to be involved in something so grassroots, and yet so deeply rooted in a wisdom tradition. As I sat and studied, and assisted with some day-to-day logistics, I felt more and more excited by the freshness of it all. We were gathered by the ocean to study these books, and as we did that, something else began to occur. I can’t speak for those who planned the retreat, but from what I can tell, the idea was straightforward; to study the teachings of the PTOD. But the thing is, those teachings are indeed so profound that a noble sangha can’t help but gather, the mandala can’t help but form, and you end up with a whole society that’s just about to happen.

Order Profound Treasury of the Ocean of Dharma