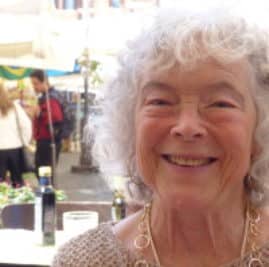 A Sukhavati (Buddhist memorial ceremony) will be held online this Saturday, November, 27, 2021 at 1:30pm Mountain Time.  The ceremony will be hosted by Ri-mé Society at the following Zoom link:

In 1980, Howard and Ginny moved to Boulder, Colorado, where they both became dedicated members of the Boulder Buddhist community.  Ginny was an avid Vajrayana practitioner, of both the Vajrayogini and Chakrasamvara sadhana practices.  She was among the very first choppöns (shrine attendants) for practice events and feasts, and continued that role for many years. Both Ginny and Howard have been ideal practitioners, students, and teachers.

Both Ginny and Howard also hosted and supported the Surmang Khenpo and the Konchok Foundations for years. Konchok Foundation supports activities, education, and services at Surmang Dudtsi-til, the home monastery of the Trungpa lineage in Eastern Tibet.

Ginny had a continuous and completely genuine warmth that radiated to anyone she met. It flowed through her eyes and her open demeanor to all. Her sincerity, humility, warmth and dedicated Buddhist practice combined to gift all of us with her wonderful presence. Our best to Howard, and may Ginny’s path continue unhindered, and blessed by guru and lineage.

With a sad farewell to Ginny,


Post a tribute to Ginny
Please note: New tributes do not appear immediately. Your tribute will be posted soon.
Mark Turnoy

Ginny was a wonderful person. She was always so warm and friendly. I haven't known many people that were so consistently warm and helpful.
I think I remember her helping make torma for a feast when I lived at Marpa house in the 80s, but she helped with so many feasts and events in the Karma Dzongkha community, I can't remember the specifics anymore. Howard, I suppose, is still my meditation instructor, and I've met him at their house a number of times over the years. I haven't met their kids, but I believe they were quite lucky to have her as their mother.
Best wishes to Ginny on her journey!

Surmang Khenpo describes Ginny as a true practitioner, a yogini. Having seen over the course of nearly twenty years what a steadfast, cheerful, and humble person she was, I’m not surprised by his comment. She was the anchor of Konchok Foundation until the fragility of her health forced her to step back a few years ago. (Her husband Howard helpfully stepped forward to take over a couple of her key tasks when she could no longer do them.) Ginny’s need to step back felt like such a blow that I very ungraciously asked her to drag out the process over quite an extended period.

Ginny’s wide circle of friends and acquaintances in the sangha include the great majority of the many hundreds of people who’ve participated in supporting Surmang via Konchok Foundation.

She and her husband Howard Lipson hosted Surmang Khenpo at their home for extended periods. Now that she has entered the end of life bardo, he is now arranging pujas for her with the monks and nuns at Surmang. I think one of her few regrets was that her health was never strong enough to travel to Surmang herself, but she is certainly there now, in spirit.

Much as we may be fundamentally alone, it’s the experience of the passing of important people from our lives that makes one, or at least me, feel more alone. That’s how I feel about Ginny’s departure.

Michelle Munro
But the weight of your hand has reached through time, touched my heart and made me Mukpo.

Changing our Relationship to Anxiety and Stress