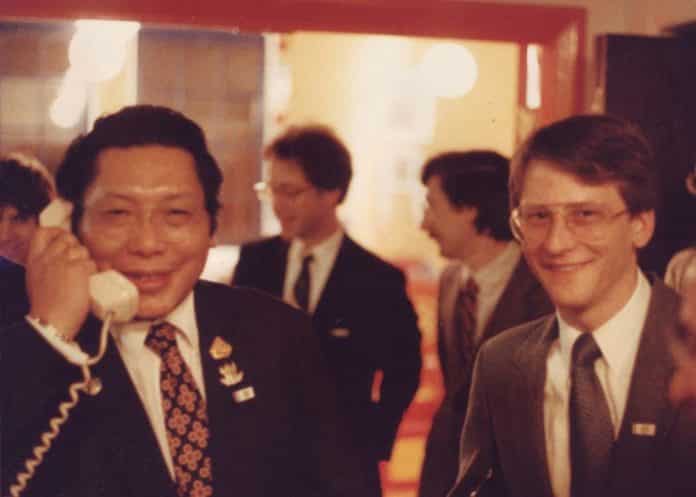 In 1978 Dan Meade was appointed by Chogyam Trungpa Rinpoche as the Ambassador to Philadelphia where he and his wife Meera served until1985. Dan was one of the first
Ambassadors, along with Binny Clarke in Boston and the Hasprays in NYC , to
be given this new role. It was a large task for a 25-year-old, as it
included administrating the  Dharmadhatu, and the huge responsibility of
teaching the Dharma and establishing regular meditation sessions. In this
relatively newly established center,  Dan and Meera did stirling and stable
work and the membership grew at a steady rate. In 1989  the Meades moved to Nova Scotia, where Meera started a preschool – where many of our children
and grandchildren spent their mornings –  and Dan established his
contracting career.

As many of you now know,  on Saturday, Sept 16th,  Dan died of throat cancer
in the arms of his devoted son Alexander, who had been his loyal care-giver
for some months. Please keep this old VCTR servant and student in your
hearts and minds as he traverses the bardo. May he find peace and
enlightenment and continue his bodhisattva activity.

The Vidyadhara composed a beautiful poem for Dan entitled
Conquering Middle America with the Sound of One Finger Snap.

The Sadhana of Mahamudra Feast and Funeral will be performed to celebrate Dan’s life in Halifax on Thursday, Sept. 21st at 4 pm at KCCL.

Dan wrote three articles for The Chronicles of Chogyam Trungpa:

The photo below was taken by The Vidyadhara Chogyam Trungpa Rinpoche just after Dan got his first driver’s license and took Rinpoche out to do some errands.  Rinpoche was the first passenger Dan ever took anywhere. 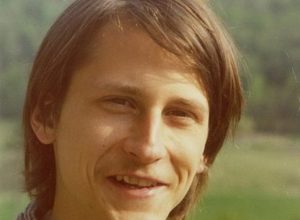 Dan and I were friends in our various lives in Boulder, Boston, and Halifax. After his love Karen died (of cancer), he started writing and asked me for help in getting his notes readable. I helped him over the following years with -- besides interminable rewritings of his CVs in various job hunts -- manuscripts on Karen, Kelly, Zara, and... others. (The names were a draw, yes, but the fantastical and insightful gut-level stories got me hooked.) Upon hearing that Dan had only about two more months I knew he was ready for the next chapter of this story we call samsara -- but I thought it was weeks away, not just days.

I will miss him more than almost anyone else I know -- we were friends through thick and thin and even -- actually, especially -- at the worst of times he always made me laugh. Thank you, Danny Boy!

How I'll miss
Your rants and raves
Your hilarious, brutal truths
Your fairytale princesses and ogres

As he ran through the woods
he would slap the trunks of the trees
singing:"Ta-ra-ra-BOOM-de-ay!!"
freaking out the meditators.
He was one of the youngest, but
totally devoted to his teacher.
We drank, and he was my friend,
and he taught, and he was a
real person, and he was a
wonderful person. Catch up
with you later, Dan.

Members of the New York Dharmadhatu often went to Philadelphia for programs and visits. I remember fondly how welcoming Dan and his beautiful wife were to all of us. He was one of the early ambassador's that Rinpoche appointed and he truly worked effortlessly to fulfill Rinpoche's trust in him. Since most of us were very young in the early days, we did think anything of it that Dan was an ambassador at age 25. He was just someone Rinpoche had faith and trust in and Dan delivered big time. Very, very sad to hear of his passing. He lead a truly meaningful life. May it be auspicious.

Dan,
I know you from the early days at Rocky Mountain Dharma Center, over the years, your skill as a carpenter/jack of all trades, conversations with a cigarette in your hand, and more recently, reading your manuscripts. Your writing is true and wild--refreshing like a mountain stream. Your unflagging love for your guru will serve you well in your travels. Go well, stay well, my friend.

I encountered Dan in Philadelphia as I made my way as an adult in my first professional job circa 1981 - 83. I made my way to Philly at least a couple of times from Central Pennsylvania (4 hours), to do one program or another. I'm recalling a teacher training weekend I went in for. I remember not all of us having time to actually present what we prepared in one part of the weekend...and his using the marker of having looked at our practice books, and deciding who would go first, based on how much they had practiced over a period of time. Just noticed yesterday Dan's being close to passing, and now having passed. This is a big loss for us. Warmest regards especially to his family & friends. Glad to hear he's been in Halifax. All best, Ira Zukerman, DC

I knew Dan as a very young man in Vermont. He wandered around the grounds of Tail when I was in long retreat in a cabin. He was then a Milarpa-type yogi..quiet, loved to practice, shy and loved nature.

A pure soul with deep understanding and so much devotion to Trungpa Rinpoche and the Dharma. When I think of Dan, I remember the pure and beginning years on the early 70s at Tail..all the freedom we had and a kind of individual wildness being channel by Rinpoche through teachings and practice.

I was there in Philadelphia when Kelley Welsh took that picture.The phone rang during a party, and VACT just answered on the spot.From his responses, it was clear VACT was talking to somebody who was calling in for the 1st time. He was so sweet and kind! Maybe that helps you understand Dan's grin. . . ?

"May I not be separated from you, warrior." Thank you again and again.

Mindrolling Jetsün Khandro Rinpoche
Having received Buddhism in the most authentic way, we must now continue that in a very changed world

My Love for Kunga Dawa

Ownership of Windhorse Farm Transferred to the Mi’kmaq