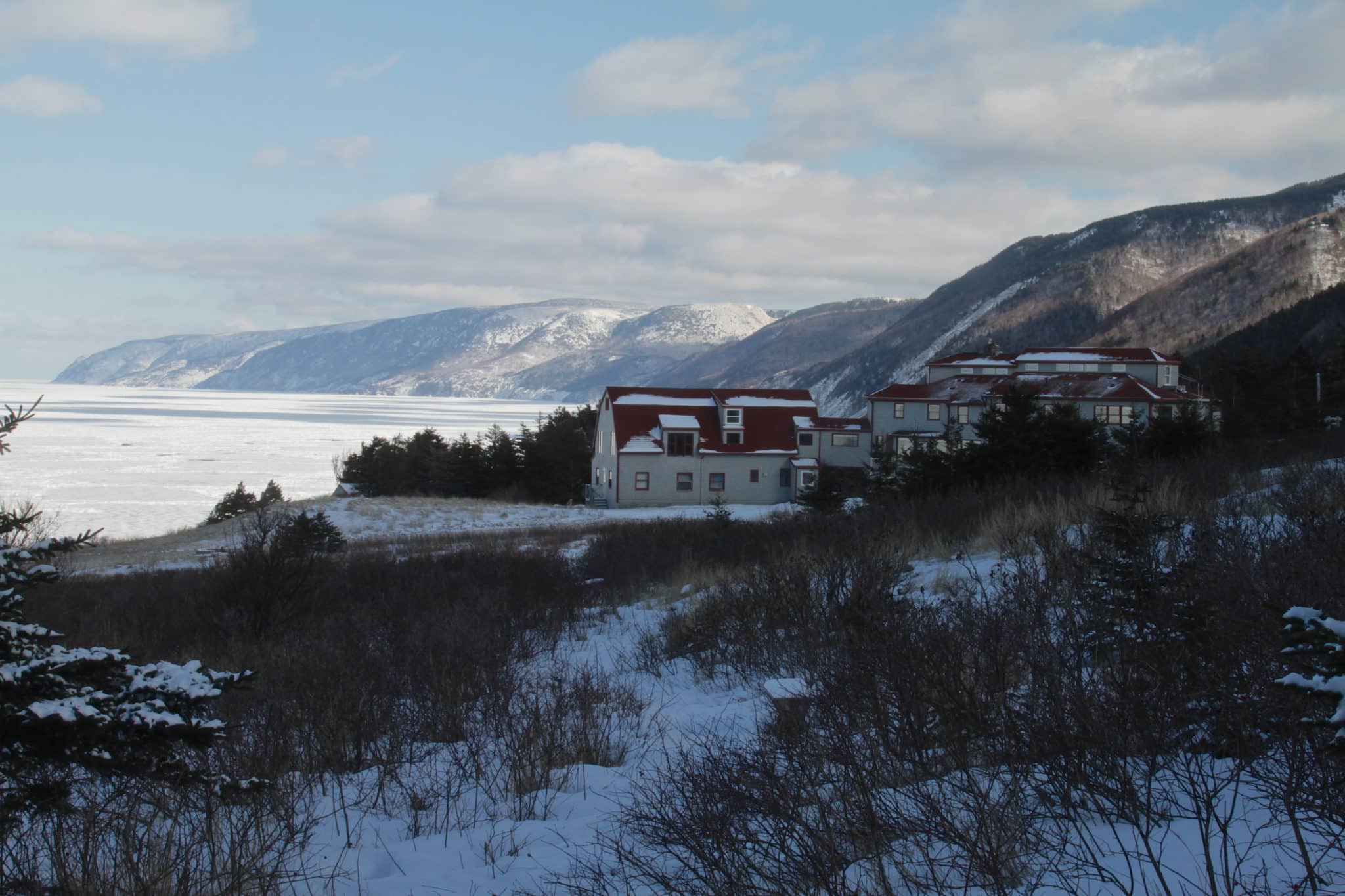 “You could say we are just an average bunch of people here  average in terms of our confusion and our wisdom, our inherent goodness and our obstinate little ways. But creates a good future rather than continues to destroy the planet.” -Ani Pema Chödrön

Gampo Abbey is a Shambhala Buddhist Monastery on Cape Breton Island in Nova Scotia. At the time of filming it was celebrating thirty years from its founding by Chögyma Trungpa Rinpoche in 1984.

Every winter a six week retreat called Yarne is held there. Lay practitioners join the Abbey’s monks and nuns for six hours of daily meditation, teachings, periods of study, household work and rest. Part of most days are spent in silence and there are two weeklong periods of complete silence. Ani Pema Chödrön is the retreat leader and main teacher.

The tradition of this retreat goes back to the time of the Buddha when monastics would gather in summer to shelter from the monsoon rains to meditate and hear the Dharma.

Gampo Abbey is nestled in the lap of the Cape Breton Highlands and perched on a cliff overlooking the Gulf of St. Lawrence – a site both achingly beautiful and challenging as the hurricane force les suetes winds can sometimes blow for days. On any given day there can be rain, sleet, ice pellets and snow, fog and sunshine – perhaps a reflection of the ever changing minds of the practitioners.

This beautiful portrait of Yarne and the Abbey was filmed by Kent Martin while a member of the Yarne sangha.

Kent Martin has made well over a hundred films and television series dealing with history, economics, the arts, the environment, spirituality, and humour. In his career, spanning almost forty years. He has produced, directed, edited, photographed and written. These films, for the most part produced by the National Film Board of Canada, have played in Festivals all over the world from the Berlin Film Festival to Sundance and from the Toronto International Film Festival to Amsterdam’s IDFA. His productions have garnered twenty Genie and Gemini awards and he has been nominated six times for the prestigious Donald Brittain Award.

Early work as a director included an hour long documentary about the artist Miller Brittain and In Love and Anger, a portrait of the great poet Milton Acorn. He produced Who’s Counting with economist Marilyn Waring. The feature documentary Westray, directed by Paul Cowan, was short listed for an Academy Award. The multiple award winning film Passage produced with director John Walker, was called, “one of the great triumphs in Canadian documentary film history”, by the Toronto Star. The CBC television series about the Second World War, Canada Remembers, was called “a splendid piece of filmmaking” by the Globe and Mail. Men of the Deeps, about the Cape Breton coal miners choir, had one of the largest audiences ever for a documentary on Canadian television. JoDee Samuelson’s animated film Mabel’s Saga was selected as the Best Short Film at the Montreal World Film Festival. The Strangest Dream, about the life of Nobel Prize winner, Joseph Rotblat, the only scientist to walk away from the Manhattan Project, had a special screening at the United Nations and the European Parliament. Hofmann’s Potion, directed by Connie Littlefield, is a film about the early history of LSD.

Kent is also interested in the world of spirituality and has produced documentaries including Forgiveness with Johanna Lunn, the celebrated Words of My Perfect Teacher with Lesley Ann Patten, Tulku with Gesar Mukpo and The Sacred Sundance directed by Brian Francis. A film much valued as a teaching by First Nations elders. Forgiveness won Best Documentary at Hot Docs.

As well in recent years he co-produced, A Drummer’s Dream, featuring seven of the world’s best drummers. The Chocolate Farmer by filmmaker Rohan Fernando tells the story of Eladio Pop, who calls himself “a traveler on this Earth”.

After leaving the NFB Kent is back to where he started as an independent filmmaker, forming his own company Unceasing Play Productions. He has fallen in love with the possibilities and economy of working with HD DSLR cameras and has made a feature documentary called Raising Windhorse about the oldest working example of sustainable forestry in Canada. Also he is presently launching a film made at Connections, a centre for people living with mental illness in Halifax, which tells the inspiring stories of eight members. He has also recently completed nine short films for the project, A Beautiful Forest, produced for the Aboriginal People’s Television Network. These films portray the research by both aboriginal and non-aboriginal scientists in the Acadian Forest of Maritime Canada.

Interview with the Dzogchen Ponlop Rinpoche

Jigme Phuntsok
Now, as for your root teacher, Trungpa Rinpoche and his connection with Shambhala ...

Escape from Tibet with Trungpa Rinpoche

Seeing the World with Fresh Eyes