Recorded in Halifax on 15 May 2007.
Thank you to Lama Ngodup Dorje for interpreting this conversation.

Background. The Vidyadhara spent many months on retreat during his teenage years at the special site for most of his terma discoveries in Tibet: Kyere Shelkar, a mountain near Kyere Monastery. This monastery was given to the tenth Trungpa Rinpoche by his student, the king of Lhathok, the kingdom in which the monastery was located, and it thus became part of the Surmang group of monasteries from that time onward. Before he left Tibet, the Vidyadhara moved his family there from Surmang Dütsi Tel, feeling that it would be safer, as it indeed proved to be. This remains the home of Damcho Tenphel Rinpoche (the Vidyadhara’s younger brother) and Karma Senge Rinpoche (his nephew). Karseng Rinpoche has spent many years collecting all the existing termas and writings by the Vidyadhara from his remaining students in Tibet.

The terma place of Kyere Shelkar has been described by Karseng Rinpoche as follows:

Guru Rinpoche visited this sacred place and blessed it; he called it Osel Namkhe Photrang (“Palace of Luminosity Sky”). Guru Rinpoche declared that it was inseparable from other great holy sites, such as Uddiyana, Shambhala, and Five Peaked Mountain (Wu Tai Shan) in China, and that other places have great blessings of the nirmanakaya and sambhogakaya, but none have more blessings of the dharmakaya than this one.

During his first visit to the West in 2003, Karseng Rinpoche told us a little about this particular Avalokiteshvara sadhana:

At one time, when Trungpa Rinpoche was at Kyere Shelkar practicing a drupchen, he encountered the mantra guardian, Ekajati, in person. She arrived in the sky from the south holding a terma casket, which she placed in front of him. The casket contained a sadhana of Ekajati and another text related to the Tsasum Gongdü cycle, which includes sadhanas of the guru, yidam, dakini, and dharma protector. The first of the scrolls contained prophecies about the future, a yidam practice called Künsang Chemchok Heruka, and a very profound Avalokiteshvara sadhana, which includes a method of practicing ritual without meditation. I hold the empowerment and scriptural transmission of those practices. They have a very strong samaya seal, but maybe in the future I might be able to give them, if I get permission from the dakinis.

As the colophon to the actual terma states:

In that way, the proper conditions were created for manifesting the red signs of nine syllables on the dark blue scroll—one fingerwidth wide and four fingerwidths long—that was given to me, Trakthung Rigdzin Tsalchang [VCTR’s terma name], by the only mother, Lady of the Charnel Ground [Ekajati]. The entrustment seal of realizing space and luminosity has been opened. Without doubt, it is a cause for having confidence.

In Lhathok, near the bank of the flowing dark blue Turquoise River, at the top of the mountain Luminosity Sky Palace Joyful Supreme Secret, in the delightful cave called the Crystal Cave of Vajrasattva, this was properly established. May it be a source of virtue. By this virtue may all beings quickly attain Avalokiteshvara. 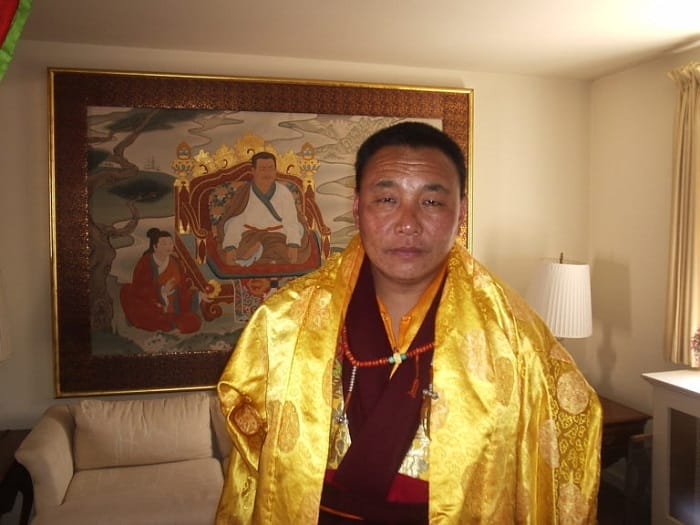 Onyumishi Kanjuro Shibata XX Sensei
Hello everyone. How are you? Trungpa Rinpoche died so quickly, very quickly. Now, all of you, sangha people everywhere, listen to Chogyam Trungpa Rinpoche’s...

His Holiness the Dalai Lama